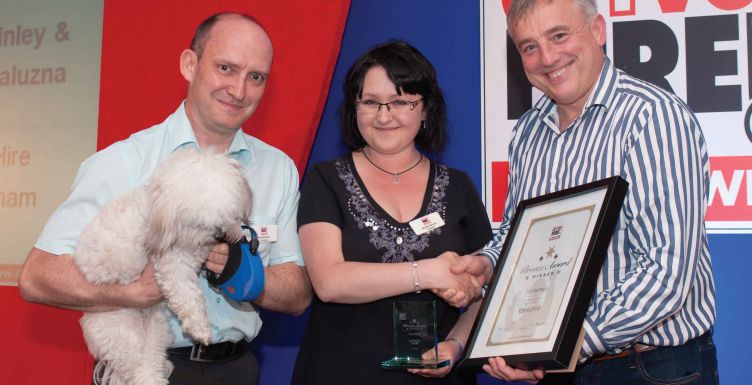 Bob McKinlay and Monika Kaluzna are a partnership both inside and outside work. And it’s proving to be a highly successful one. Following an outstanding first full year’s trading, their Twickenham franchise won Driver Hire’s 2012 ‘New Start of the Year’ award.

“I was totally taken aback when I heard our name read out at Driver Hire’s Conference,” Bob recalls. “The people on my table all started congratulating me and almost had to push me out of my chair to go and collect the award. But it was a nice moment and made all our efforts over the last two and a bit years seem worthwhile.”

Driver Hire is a leading provider of temporary and permanent drivers and other logistics staff to organisations across the UK in both the public and private sector. Bob and Monika’s team help when customers need extra staff to deal with holidays, illness or business expansion. Driver Hire is also a leading provider of Driver Certificate of Professional Competence (Driver CPC) and other logistics training. Nationally there are over 100 offices, the vast majority of which are franchised.

Bob and Monika come from similar commercial backgrounds. “I’d worked in logistics both here and in Europe,” says Bob. “I spent three years in Switzerland establishing a successful express courier operation. Monika’s UK work experience included spells with Target Express and as a Commercial Manager with Swedish Post’s UK office. What we also had in common was a desire to own our own business.”

While their close connections with transport and logistics made Driver Hire an obvious choice, Bob is sure that anyone with determination and some business flair can make a success of running a Driver Hire franchise.

“The back-up is fantastic both pre and post opening,” he says. “We both attended a two-week course to learn the ropes of the business prior to opening. Once you’re trading, the support is there all the time. Our Area Development Manager spent time in our office during the first week we were open. Then, as you develop, there’s support at every level from IT, Finance, sales and marketing. And of course you can call on the expertise of Driver Hire’s nationwide network of franchisees.”

During Bob and Monika’s first year they achieved a turnover of £450,000. This included some business in a neighbouring vacant territory that they looked after on a temporary basis. Into their second year they continued to grow and passed the £500,000 milestone - 27 per cent ahead of the previous year - no mean achievement in a far from easy economic climate. On average they provide cover for 60/100 shifts per week and find work for around 30 drivers. They’ve also added a 16-seater training room and completed 2,000 hours of Driver CPC training during the first quarter of 2013 - a useful additional income stream.

They chose the Twickenham postcode because it was an area Bob knew well and considered it to have bags of potential. He explains: “I think a mistake some people make when they buy a franchise is that a strong brand and a tried and tested business model will guarantee success. It doesn’t. While there’s no doubt that buying a franchise is a much safer route into employment, nothing comes for free.

“You’ve got to be prepared to work at it - and you may need to consider this when looking at any franchise. I’m a keen cyclist, but during our first year in business the 24/7 commitment you need to succeed meant my beautiful racing bike gathered dust in the garage. The plus point is that, as you develop the business, the more you put in the more you get out - that’s both in terms of financial success and opportunities to ride my bike!”

Driver Hire is part of a £25 billion recruitment industry; within that, the market for temporary drivers is worth £2 billion annually. An average turnover for an established Driver Hire franchise is £691,000 - that’s twice the national average for other franchise businesses. All of which make Driver Hire franchises highly sought after.

There are currently a number of Driver Hire franchises available - resales, where you’re buying an existing business, and start-ups. The basic licence will cost you £30,000. This includes pre-launch support, training and initial marketing material. However, you’ll also need a budget for additional business start-up expenditure, including furniture, office equipment, signage and professional fees. So a £40,000 start-up budget is recommended.

Bob and Monika’s Twickenham office was a resale and prices for them will depend on the individual business. Historically, they have ranged from £40,000 to £500,000.