“I never intended to have a business in Cornwall. It’s just happened because we’ve done a good job with Dyno” 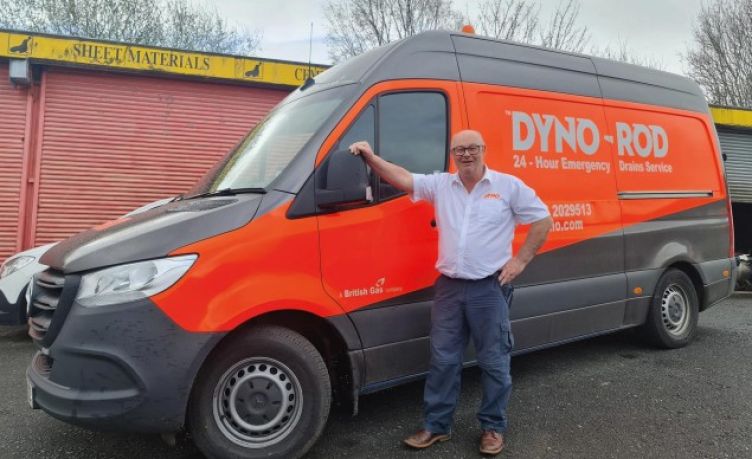 After acquiring his first Dyno-Rod franchise at a franchise fair in 1993, it’s been quite a ride for Russell Hand, now the owner of the largest plumbing franchise in the UK

By his own admission, Russell Hand didn’t know what he was getting into. He says, “I went into it thinking I had bought a job.” It’s clear that some 28 years later he has gotten much more than that. Now with his wife and two daughters also working in the business, Dyno-Rod is very much more than a job for Russell.

Purchasing the Shropshire franchise as a resale from a retiring franchisee was not what Russell first had in mind. He says, “I wanted to do marquee hire. I thought it would be easy enough, I didn’t realise how much it was going to cost me.” With a territory now covering North Wales to Lands’ End, it’s safe to say he made the right choice: “I was lucky,” he laughs.

However he fell into it, Russell has found a varied career which he enjoys, even after almost three decades. He says: “Every day is exciting really. You should come to work excited every morning or stop coming to work. What’s kept me here for all these years is just being able to work on the business and create a bigger business each day and each week.”

Despite its nearly 60-year history, Russell is impressed with Dyno’s adaptability. “We’ve been able to move with the times and get into markets that have been quite exciting because I’m not a plumber and yet my business is the largest plumbing franchise in the UK.” Prior to being bought by British Gas in 2004, Dyno dealt solely with drains but now Russell sees plumbing as the largest part of his business. He explains, “on the drain side, we’ll do 70 jobs a day now. On the plumbing side, we can do 400/450 jobs a day.”

But how has someone with no plumbing experience acquired such a large franchise territory? “I think that if you’ve been doing a good job for the franchisor, then a neighbouring area comes up for sale. They’re either going to get somebody new in there, or sell it to somebody who’s got a track record,” says Russell.

As a three-time franchisee of the year, he was approached by Dyno with an offer to take on an additional territory. “You’re not pushed into anything,” he says, “I never intended to have a business in Cornwall. It’s just happened because we’ve done a good job with Dyno. They feel more than satisfied with us and I suppose, obviously, I’ve got to feel more than satisfied with them if I’m still here after all these years.”

Support from the top

Despite jokingly calling them “hard taskmasters,” Russell is quick to give Dyno and (parent company) British Gas credit with things that “make a lot of difference to the business,” such as an increased marketing profile and stringent health and safety procedure. Russell is also grateful for the “massive buying power” and back-end services his franchisor provides. “We have support helping us forward with audits or more information and demographics of areas so we can understand the type of customers we get in particular areas.”

In terms of hands-on support, Russell says, “If I’ve got a major problem or even something quite minor, I can approach the franchisor to be able to get some help or advice or clearance on something.” He cites one recent example of the franchisor’s support after struggling to find enough vehicles for the scale of his operations, “what has been brilliant is that we have borrowed 12 British Gas vans.”

An obvious selling point of most franchises is the use of a name people know, but what are Dyno’s values? What does it mean to customers? “It’s an above-average service,” Russell explains. “They’re not ringing us because we’re going to be the cheapest but they’ve got a problem and they want it sorted to a good quality and right first time.”

Customer service is also a big part of Russell’s personal ideology and this is an area he insists new franchisees should excel in. He elaborates: “For us, it’s just another blocked drain or just another leak. But for the customer, they’re devastated. If they’ve got water pouring through the ceiling, they’re devastated. It’s a customer’s home that you’re dealing with. Not just their house.”

Russell is someone who enjoys his work; asked for his favourite aspect of the job he can’t decide: “I want to split it between interacting with people and turning around a dissatisfied customer into a very satisfied one.”

These are perfect traits for someone in Russell’s position and his management style is similarly personable. He describes a regular weekly meeting in his Telford office (the only office needed for his large franchise network) as ‘Russell’s Roundup’ which when things are not going to plan he describes as: “A cross between Russell’s Roundup and Russell’s Rant. Thankfully, we get more roundups than we get rants.”

As he mentions, Russell’s day-to-day is not hands-on with every aspect of the business. He has made his franchise work for him and for Russell, that is a management franchise. He says, “I’m quite lucky that the office is up and running before I get here. I almost do a meet and greet with as many people as possible and I try to make time even if I’m busy. I’ll try and make time to actually talk with people. A lot of my day is taken up looking at new employees, then either I make zoom calls, interviews, or look at apprentices. I don’t get involved with day-to-day jobs. I get involved more with the broader structure really of what we’re doing and get more involved with people.”

Russell is typically honest with his advice for potential new franchisees. He says, “I’d probably say don’t do it, don’t come into this type of franchise if you just want to do what I did very originally, which was just to guarantee myself a job and to buy myself a job. If somebody was looking seriously looking to have a managerial role? Then this type of franchise would be ideal.”