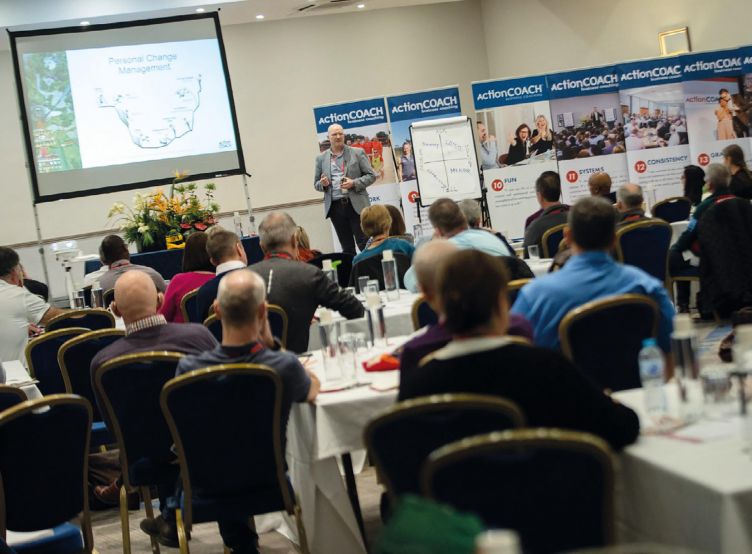 "The great thing about ActionCOACH is the community is so diverse, you can get all the support you need, whether that is on mindset, selling or client retention,” says franchisee Alan Bark

In August, Alan Bark reached his best client income yet at over £24,000 for the month and, with the launch of his upgraded exclusive franchise territory in Chester, he’s also celebrating turning down the best job ever offered to him.

After working for two decades in sales positions in the tech sector, Alan decided now was the time to work for himself. His research had taken him in two directions – taking an equity role in an existing business or starting his own company. At the same time as looking into a variety of white-collar franchises, he’d also been offered the job of a lifetime.

Alan explains: “I had a contract for a directorship with shares in an occupational health business – it sat on my desk waiting for me to sign. Meanwhile, I had visited a franchise exhibition in Birmingham to speak with a few of the franchise brands on my shortlist. One of those options wasn’t exhibiting, but did have an advert on the back cover of the show guide that piqued my interest. It was ActionCOACH.

“I called ActionCOACH the next day and spoke to their recruitment director, Julie Wagstaff. By Monday, I was at their UK support office in Leicestershire for a discovery day.

“As their UK co-founder, Ian Christelow, talked about the huge number of businesses not reaching their potential - and in many cases failing - I was ready to commit to being part of the solution. As we were taken through the systems and strategies ActionCOACH has used with thousands of businesses all over the world to make clients successful as well as their own franchises, I wondered how I’d never found them before. It lit a fire inside of me and I knew I had to become an Action Coach.”

Alan went home, talked it through with his wife, then went to his desk, tore up the directorship contract and started planning for his life as a business owner.

“It felt like a truly pivotal moment,” he explains. “We had sold our house, my little girl was now two years old and, with some financial backing from NatWest, I was facing a new beginning. It was late February and I was due to launch my ActionCOACH business in Derby in April - there was a lot to do before then.”

“Before my initial training week began, I attended one of the many masterclasses ActionCOACH schedules each year for the franchise network. This one was delivered by our UK performance director James Vincent - his knowledge and passion blew me away. Each franchise partner is allocated a master coach to support them in their new business, so when I turned up for training I went straight to Ian and asked if James could be my master coach.

“James worked brilliantly as my first coach. His experience in performance coaching filled my skills gaps, whereas a new franchise partner with less sales experience than me may find a master coach with a strong sales background more useful in the first few months. The great thing about ActionCOACH is the community is so diverse, you can get all the support you need, whether that is on mindset, selling or client retention.”

Alan set targets for year one in his business, aiming to get eight clients. He secured his first two clients from a networking group and his third using LinkedIn advertising. Alan adds: “At the beginning of year two, I had a breakthrough where I was regularly landing two clients a month - it’s why I get all my clients to test and measure their marketing activity too!”

18 months into his business, ActionCOACH UK introduced a new Senior Partner licence where existing and prospective franchise partners could apply to exclusively operate within a territory containing 10,000 businesses. Alan’s daughter was now living in Anglesey with her mum and he thought it would be a good idea to invest in a territory that brought him a little closer to her.

“My plan is to split my time between the two locations and grow my team to support the second phase of the business,” Alan says. “My client generation target is now one a week to grow client income to £50,000 a month by the first quarter of 2020. We have an office in Derby and we’ll need one in Chester, plus a new PA and an employee business coach.

“Longer term, I’ve been looking at growing my business portfolio by taking an equity stake in businesses within my franchise territory, trading my expertise for shares of increased profits. On top of that, I’d like to grow my exclusive area by investing in more territories.”

When Alan is not working, he doesn’t sit still. He’s a keen cyclist, taking to the roads twice a week. His longest journey in the saddle was 110 miles from Derby to Anglesey.

“Despite the trauma I cause my friends and family as a middle aged man in Lycra, I enjoy the sense of achievement,” Alan says. “That’s a feeling I’ve been getting used to on a regular basis with my clients - business growth, award wins and improvements in work-life balance.

“When I came out of the corporate world and I was seriously considering jumping back into another job, albeit a dream one, there was a strange draw to ActionCOACH that I couldn’t entirely put my finger on.

“It finally dawned on me after attending one of their many events that it was the unconditional support available from everyone to each other. They only use positive words and engage with a culture of abundance. When you’re exposed to world-class thought leaders, it’s an incredibly fun learning experience where you can’t fail to become a better person.”

Established: 1993 in Australia. 2001 in UK
Number of franchised outlets: 240 in UK
Location of units: UK-wide
Investment range: £69,000
Minimum required capital: £20,000
Contact: If you want to build a business with scalability and longevity and you’re the kind of person who:

A. Loves learning and developing yourself;

B. Has enjoyed success in your career or sport; and

C. Is willing to invest if they see substantial returns can be made…