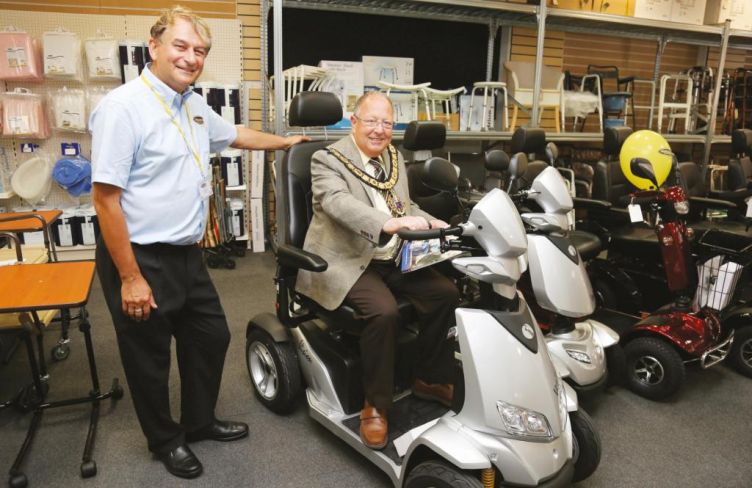 Ableworld is targeting a national coverage of 60-70 stores, with at least 60 per cent of the total being franchised owned outlets

Why do successful companies decide to offer their business model as a franchise? For the country’s largest mobility retailer, Ableworld, it was to expand its trusted brand and capitalise on the tremendous growth of the mobility sector.

The mobility industry is one of the fastest growing sectors in today’s retail space. UK demographic and economic forces are very positive for this sector.

There are currently almost 15 million people aged 60 and above in the UK and this is predicted to rise to 20 million by 2030. People are living longer and the millions of baby boomers born in the 1950s and 1960s, now reaching their ‘third age’, frequently need the products and services Ableworld offers.

And since many people in this age group often have final salary pensions and significant property equity, they have the resources to purchase equipment like mobility scooters, specialist furniture and stairlifts.

Ableworld opened 10 of its own stores before offering its model up for franchising. The company now has 34 stores across the country - from Scotland to Southampton and from Colchester to Cardiff. Half of these stores are company owned and half have been opened under the franchise umbrella.

Having its own stores as well as franchises means Ableworld has ‘skin in the game’, giving franchisees the security of knowing that if the franchisor says something will work, it probably will. It also means a process of continuous improvement exists as company stores and franchise stores find ever better ways of doing business and sharing that best practice.

One of the areas that has improved from the early days is the procedure for opening new stores and bringing new franchisees on board. The fact everything is fully documented and that there is a dedicated store opening project team gives franchisees confidence and a jump start for their new businesses.

In addition, approximately a third of the initial franchise fee is allocated to marketing activity around the time of the store opening, with substantial coverage in local press and online.

This is what Ableworld Gloucester franchisee, Conway Davies, said about his experience of opening an Ableworld store: “I just wanted to thank you and your team for getting us this far. “I’m very much aware this is early days, but we couldn’t have asked for a better start.”

Ableworld’s support continues after the launch. The company has experienced franchise support managers who visit stores every four-six weeks to help with ongoing training, brand adherence, coaching and marketing support.

Being the largest mobility retailer in the country has significant trade advantages, with franchisees able to benefit from the unrivalled buying power of the group and access all the support functions you would expect from a professional retail chain.

Donna Wilson, who operates the Lincoln and Newark franchises, expresses how she feels about the support offered by Ableworld: “Everyone has been lovely and supportive. I’ve spoken to other Ableworld franchise owners and they’ve been very encouraging, it’s nice to get help and advice from others with more experience of running their franchise.”

She adds: “Head office have been brilliant - you can pick up the phone and get help with any aspect of the franchise. Nothing is too much trouble and you can pick the brains of people with many years’ experience.”

One of the latest stores to open, Bournemouth, is joining a network that is seeing impressive year on year growth in sales for existing stores, including Southampton, which was the first store to turn over £1 million a year.

When asked to reflect on his experience of being an Ableworld franchisee, Southampton co-owner Jeff Newman said: “It has met all our expectations, especially the satisfaction we get from providing the right products for our customers.”

Ableworld’s strategy from the beginning was to build a trustworthy brand, so that the company could capitalise on the unstoppable market forces referred to above.

The company has grown significantly, both organically and by acquisition, and it will always consider these options going forward. However, the management is convinced that the main engine of growth as far as the store network is concerned will be via the franchise model.

Ableworld is targeting a national coverage of 60-70 stores, with at least 60 per cent of the total being franchised owned outlets.

An Ableworld franchise is ideally suited to two or more people pooling their skills and several franchises are run by joint owners, sometimes husband and wife.

Franchisees come from a wide variety of backgrounds, such as sales, retail, construction, the armed forces, teaching and health. No previous experience of the mobility industry is needed, as the company has a comprehensive training programme.

Successful franchisees combine a desire to help others with their personal skills and the proven Ableworld franchise system to create a business that makes a difference in their community.

“The only franchise that appealed to all of us was Ableworld,” David says. “When we opened the business, we never for a minute realised how rewarding and humbling it would be to deal with some of the wonderful customers who come through our door who are in need of guidance and advice on products to support their daily living. We would definitely recommend the franchise.”

With more than 30 stores nationwide, Ableworld is growing. Thanks to its successful and proven franchise model, it will continue to grow as it strives to maintain its position as the number one mobility retailer in the UK.