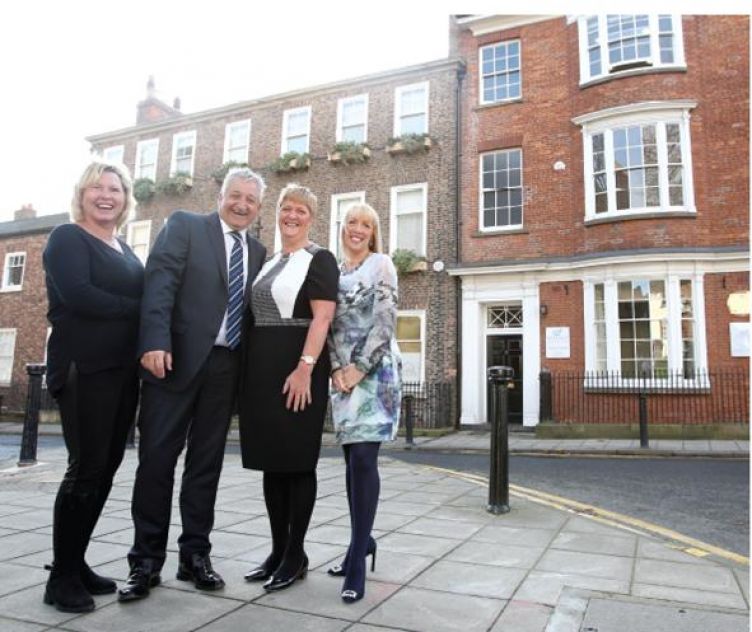 After spending most of his life in the care sector, Glenn Pickersgill launched Heritage Healthcare as a franchise in 2013

Heritage Healthcare, a homecare franchise with its head office in Darlington, provides expert care at home to individuals across the country who have been assessed as needing support to enable them to continue living independently within their own home and community.

Although as a company Heritage Healthcare only formed in 2008, the journey in care for Heritage CEO, Glenn Pickersgill, has been a long one.

The Pickersgill family first began providing care in 1955, when Glenn’s grandmother, Annie, set up a three-bed care home in Darlington. She ran the home successfully until 1970, when she retired after placing Glenn’s parents, Marion and Jim, in charge. Glenn was 10 years old when he moved into the care home and that’s when he got his first insight into caring for the residents.

Glenn says: “I remember playing cards and games with the residents - three lovely old ladies. They became my friends and family, rather than just people my mum and dad looked after.”

In 1973 Glenn’s parents bought a nursing home and then opened another in 1977. “It started to get serious at that point, my parents were really growing the business,” Glenn says. “We didn’t leave the ladies behind, as they joined us on our new venture too.”

In 1978 Glenn started out on his own, purchasing a cigarette vending machine business: “I worked nights and weekends and during the day I worked for my other grandparents on their farm. In 1979 I tried to convince my grandparents to allow me to own a part of the farm. I was met with a resounding ‘no chance’, so I bought another cigarette vending business instead.”

By 1983 and at the age of just 23, Glenn had grown his business to a turnover of over half a million pounds. But although the figures were good and his hard work was paying off, he had become disinterested in the business.

“I was getting bored and the business wasn’t challenging enough for me,” Glenn says. “I decided that having lived around care and learning as much as I had at such a young age, it made sense for me to get back to my roots.”

So he purchased an eight-bed property and began to adapt it into a residential home for the elderly. He opened Harewood Lodge in 1984 in Darlington, with the sale of his cigarette business paying for the property and its alterations.

By this time Glenn’s parents owned two nursing homes and a large residential home for the elderly. In 1985 the decision was made by Glenn and his parents to work together to provide the residents of all four homes with the best possible care and to expand the businesses further. Together, in 1987, the Pickersgill family created Supreme Care Homes.

“Residential and nursing care had taken over my life,” Glenn says. “I was working seven days a week. My wife and I had started a family and sold our first care home. All the money we had was invested into a new purpose built care home, Ventress Hall in Darlington, which my parents and I owned.”

Ventress Hall was opened in 1989, following the successful closure of the family’s two nursing homes. Glenn explains: “They were ageing and we decided it was time to move lock, stock and barrel into the new home.”

The Care Act 1991 was released in 1993 and was the first time people began to discuss the option of domiciliary care. “At this point, we knew very little about domiciliary care,” Glenn says. “By 1994 my parents and I were writing policies and procedures for the ISO quality assurance and delivering homecare across Darlington.”

The care home business continued to grow alongside the provision of homecare with the purchase of another residential home in nearby Richmond, North Yorkshire and another in Barnard Castle.

However, in 2005 the Pickersgill family decided to sell the company. They had dedicated years of their lives to caring for others and were presented with an offer they couldn’t refuse. Supreme Care Homes was sold in 2006.

DOING WHAT HE LOVED MOST

“After six months of not working following the sale, I was bored,” Glenn says. “I missed the working life and having a business. It was then that I started to look for another care home to purchase, so that I could get back to doing what I loved most.

“I looked around a number of care homes, but when I started to think about the future of care all I could see was care in the community or care at home.”

Aware they would be making a return to business and specifically the care market, Glenn and his wife, Sally, purchased the company name Heritage Healthcare in 2007. It was in 2008 that they finalised the purchase of a homecare business in Guisborough.

“Until three years earlier, the business had been a franchise,” Glenn says. “It was perfect for us - I knew the area well and it made sense.” Glenn invited Amanda Jackson, a former personnel manager at Supreme Care Homes, to join himself and Sally in their new venture. Amanda, now a director of Heritage Healthcare, and Glenn worked hard to build the company’s reputation in the Redcar and Cleveland area.

In 2009 an office was opened in Glenn’s hometown of Darlington and it was then that Michelle Fenwick, who had also worked for Glenn at Supreme Care Homes, joined the team, taking the role as registered care manager. Michelle is now a director of Heritage Healthcare and a qualified franchise professional.

“In 2010 we won another contract in York and in 2013 we opened another office in Teesside,” Glenn says. “We had opened four offices in five years, but I knew that alone we couldn’t win contracts fast enough and didn’t have sufficient capital to become a nationally recognised company, which was my goal.”

Glenn began to research the prospect of franchising Heritage Healthcare: “I actually started to research the possibility of franchising our business in 2011. We were confident in our policies and procedures and the quality assurance we worked to. We felt we could use our experience and expertise to help others develop and manage their own care businesses in their own area.”

Even with their vast experience of the care sector, it took until June 2013 for the Heritage Healthcare team to ensure that the product they were to sell - the business - was right for other people.

“Then came the daunting task of finding like-minded individuals who would believe in us, trust in our ability and trust us enough to give us a large lump sum in advance,” Glenn adds.

One year later, the team had recruited their first franchisee, Jameela Rangoonwala, owner of the Heritage Healthcare Cardiff branch.

“It was a fantastic moment for us,” Glenn says. “We were so proud to see all our work and investment of time pay off.

“Today we have 10 franchisees, with more looking to join Heritage Healthcare in the near future. I am incredibly proud of how far we have come as a franchisor and the journey ahead of us.

“I am also delighted that our carefully recruited franchisees have taken on the Heritage Healthcare ethos of providing outstanding care. We have had a successful last few years and I continue to be excited at the prospects ahead.”

Start your own Heritage Healthcare franchise

Send a free enquiry to Heritage Healthcare for further information!