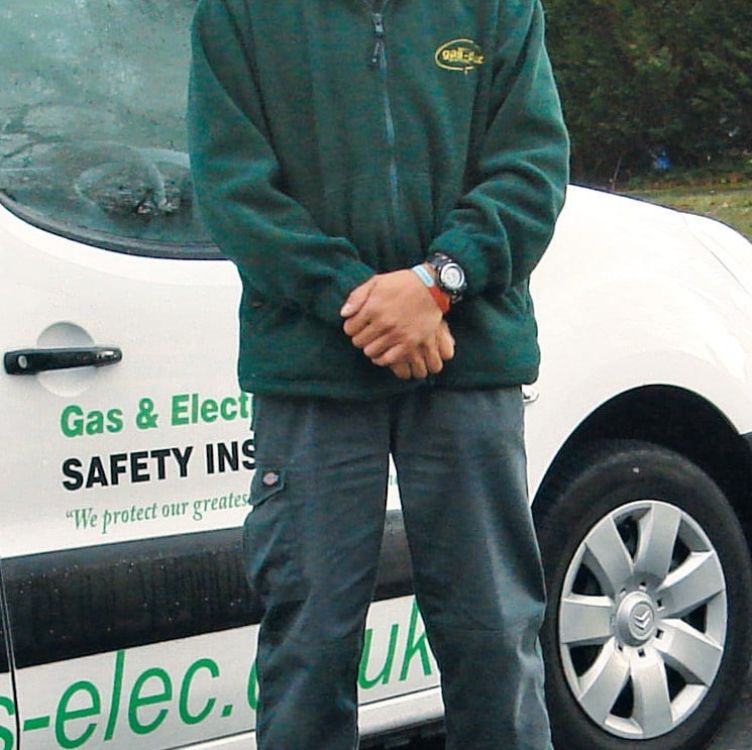 Building a successful business takes time and the first year in any business can be particularly nerve wracking, particularly if you are going it alone. That’s why choosing the right franchise, with the right level of support, can make all the difference in your crucial first year.

gas-elec, the gas and electrical safety inspection company, has several engineers who started their businesses within the past year and one is a gas-elec returner, who found running a business ‘on the outside’ fraught with difficulty. What they all have in common is a determination to build on their first year and a unanimous ‘three cheers’ for the support they receive from the gas-elec franchise.

After 26 years in the army, Nigel Evans started his gas-elec business in Wales in August 2012. In his early 40s, he felt he was too old for the apprenticeship route into a new career, so opted instead to go for an established franchise. “I came for the name,” he admits cheerfully. “I felt I was stuck for time when it came to building a business, so I went for a tried and tested format.”

His first few months have been a high learning curve for him: “It’s enjoyable pressure, really. The reality is it takes time to build a new business and I am happy with my progress so far. I do about 15-20 jobs a week in quite a volatile area, so I am reassured that we have things like boiler replacement under the new ECO initiative as well as the safety inspections as income opportunities.

“I am definitely in gas-elec for the long run. I have a young family and a mortgage and it is a bit of a concern not to have a set income when you first start. I knew there weren’t any guarantees, but I am still earning more than I thought I would in my first year.”

Nigel’s jobs are provided by his regional office, but top of his list at head office level is IT support for his business and the gas-elec bureau that does all his invoicing, VAT and debt collection.

28-year-old Chris Poole switched areas in his early days with gas-elec. Originally in the West Midlands, he found a change to more rural Shrewsbury kick started his fledgling business; 12 months since he started, this plumbing and heating engineer is feeling pretty optimistic about the future. “My regional manager, Peter Dignum, is a good bloke and he did a lot of work with my local agents to bring in the work when I first arrived on the area,” says Chris.

“I have worked in the trade for 10 years, but this is my first business. I can’t see myself ever changing what I do, so as long as I have a good working relationship with Peter and he keeps getting me work, I am happy to continue with gas-elec. I do feel lucky that I have managed to move to somewhere where I feel I can build my own successful business.”

Darren Leonard joined gas-elec in the south west 12 months ago after a stint as one of its licensees. A self employed gas engineer in his 40s, he’d had a couple of clients go belly up and was struggling with marketing and advertising, as well as debt collecting. So handing all that over to gas-elec to handle sounded like an answer to a prayer.

“I’m not very good at paperwork,” he confesses. “A gas-elec franchise offered me the chance to escape all that and I took it. It has been an okay decision because the business is building and as long as I am in profit I’m happy. I see this as a long term business. When I was on my own I was on the computer until two or three in the morning doing invoices. Now all that’s gone. The gas-elec bureau does it and that, to me, is brilliant.”

Darren’s support team includes a regional office that does all his advertising and marketing and, at head office, a technical team for any gas and electrical queries. “There is always an expert to give me a definitive answer,” he says. “I have got back-up when I need it and that’s very reassuring. I do find the support really, really good.”

He’s optimistic about his future: “I thought doing gas safety day after day I would just get bored, but I am not finding that at all. I love the work and I am happy.”

Wai Lee is another new franchisee who has found the learning curve to be very steep. A former army medical technician, 45-year-old Wai has a real ‘can do’ work ethic. He didn’t leave all his early marketing to his regional manager - new to Bournemouth, he soon set about driving around his patch in his distinctive gas-elec vehicle and dropping his business cards into all the letting and estate agents. That helped get his business started.

Less than a year later he is “doing good”. “I am much more confident now and there is a lot more work coming in with the university and local caravan parks,” says Wai. “There are still gaps in my working diary, but only a few.

“My first months were a bit slow, but I was learning all the time. I have found the technical support at head office reassuring, even if only for confirmation I was doing the right thing. Also, Dick, the franchisee in Southampton, has been very helpful and technically I am speeding up.

“I am so glad I joined gas-elec. I made the right choice and I don’t see why it shouldn’t be a long term business. If I hadn’t gone the gas-elec franchise route, it would have taken me a lot longer to get established. My regional manager does most of my marketing and I am taking on new customers all the time. Next year will be better than this - I can see a good future for myself with gas-elec.”

Uche Mgbeguihe describes being a gas-elec franchisee as “like being in a family”. Which is perhaps why, after ‘retiring’ in 2006, Uche has just bought another franchise in west London. He joined gas-elec in 1997 and, when he left the network, was grossing annually £100,000. Excited by his success, he decided to concentrate on his own property business. “But I found going solo very hard,”

says Uche, a Nigerian born electrical engineer. “I lost a lot of the money I had been able to save by working with gas-elec. It was a big shock and made me appreciate the fantastic support the franchise had given me. That’s why, after seven years, I have come back.”

Now in his mid 50s, Uche is going to concentrate on electrical safety inspections. He would have to requalify on gas and this he doesn’t want to do. “I know with a gas-elec franchise my work flow will be solid and steady, whereas over the past few years my life has been very up and down,” explains Uche.