“My children were the main motivation behind investing in a franchise” 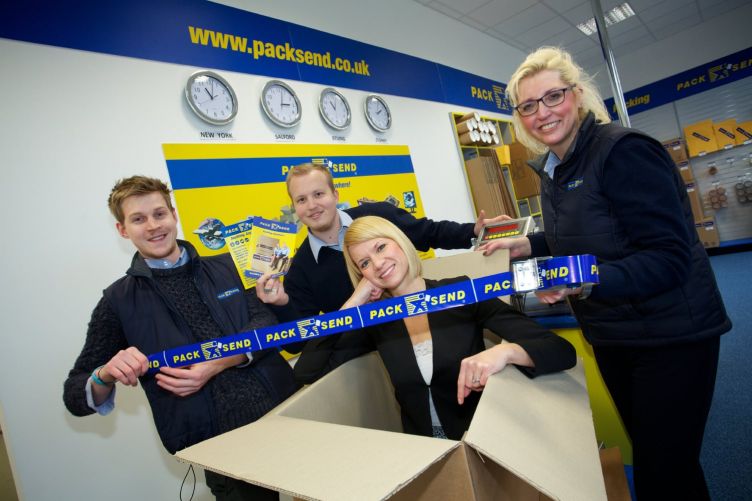 It was always Deborah Dudley's dream to start her own business and, when her children had grown up, she made that a reality with PACK & SEND

Prior to starting her own PACK & SEND franchise in 2014, Deborah Dudley had a long career in accountancy. It was always her dream to start her own business and, when her children had grown up, she made that a reality. Now, shortly after celebrating her fifth anniversary as a business owner, Deborah has created a business for her family to be proud of.

“My children were the main motivation behind investing in a franchise,” says Deborah. “I’m constantly inspired by Brogan and Ryan – I wanted to create something for their future. It was always my passion to run my own business and raising two children as a single parent did limit my flexibility and freedom to do that. The timing was particularly important as Ryan is disabled and has autism and so I waited until they were both a bit older before I pursued my dream. Choosing a franchise rather than starting a business from scratch was perfect - I was still creating a business but on the back of the PACK & SEND established brand.”

Deborah worked as a company accountant for many years, working closely with the operational teams. She became the CFO for a ground stabilisation firm that grew to have a multi-million-pound turnover by the time Deborah was ready to move on to pastures new. With a strong connection to her North West roots, she spotted an opportunity with great potential.

“I’d stumbled upon PACK & SEND and started to do a bit more research into them and what was involved in becoming a franchisee. I realised that they were very big in Australia and they had since started franchising in the UK – the service they offer was something I thought the people of Manchester could really benefit from. I would be one of the very first in the UK network but had the reassurance of the franchise to make sure that I was supported in my endeavours,” she explains.

PACK & SEND is the UK’s leading packaging and shipping specialist franchise in the country’s £70bn logistics industry. Franchisees usually start as owner-operators of their franchise, building a team to manage the needs of their customers. By providing professional packaging services and combining this with a wide range of delivery options, they can send anything, anywhere.

Deborah started her due diligence by speaking to other franchisees and making sure that PACK & SEND was right for her. Once she’d made up her mind, she was ready to embark on the intensive training programme to prepare her for her business launch.

“The training programme equipped me with everything I could need to start the business,” she says. “I spent time at the Reading head office for on-the-job training where I learnt more about the business and how it worked, as well as my responsibilities on a day-to-day basis. It was great but, as much as I loved it, I just wanted to open my own service centre and get going.”

Deborah was ready to launch and, in October 2014, PACK & SEND Salford Quays officially opened. She was fully aware that the first year of any new business could be tough but, also as an early adopter of a new brand coming to the UK, she knew that she was facing a real challenge.

Deborah says: “PACK & SEND was new to the UK, so the general awareness of the brand and our services were relatively unknown. I worked extremely hard on marketing, ploughing in a significant budget to create a buzz and honing my sales skills. Bringing an entirely new business idea to the area meant that I had to spend a lot of time educating customers on how our service could really benefit them.”

Deborah relocated from her home in Ormskirk so she could be closer to the office. After the challenges of the first couple of years were behind her, it became clear to her customers that she was right about those benefits. Deborah’s PACK & SEND service centre has the unique position of being situated just across the road from the quayside – the busy location really allowed her business to grow.

“Things definitely started to look up. Trade became consistent and I was able to recruit into the team. I’ve currently got four people working for me – two who are customer-facing, a driver and a packer. They’re focused on repeat business to make sure our service is always excellent. The growth we’ve seen over the years has been great with a 22 per cent increase in turnover in the last 12 months,” says the franchisee.

Franchisees benefit from a strategic supplier network which would be difficult to negotiate as an independent business. Specialist rates are available from all major logistics brands, whilst IT, finance and marketing systems at head office ensure you are always ahead of the game.

“We’ve had many odd requests to pack and deliver but the list of suppliers I can rely on definitely help me when they do come in,” she says. “A couple of the craziest packages we’ve been asked to send were a to-scale model of a Dalek and a life-sized Arnold Schwarzenegger. They’re certainly the times when I feel the most satisfied – being able to provide a solution to the weird and wonderful jobs.”

Deborah was recently named as Franchisee of the Year which recognises her as the top-performing franchise in PACK & SEND’s UK network. In the five years since opening her service centre, it’s an accolade that has been in her sights.

“It’s amazing to see that my hard work is paying off. The motivation I’ve had from my children and creating a business that helps to build a stable future for them makes it all worth it. The challenges that Ryan has faced have never stopped him from overcoming any obstacles put in his place and that fills me with pride. For women, I think their career is governed by having children and the timing of that. Ultimately, my children are the reason why my business has been so successful – they always have, and always will be my motivation,” says Deborah.