Find out how Mitali Chopra is creating business champions with ActionCOACH 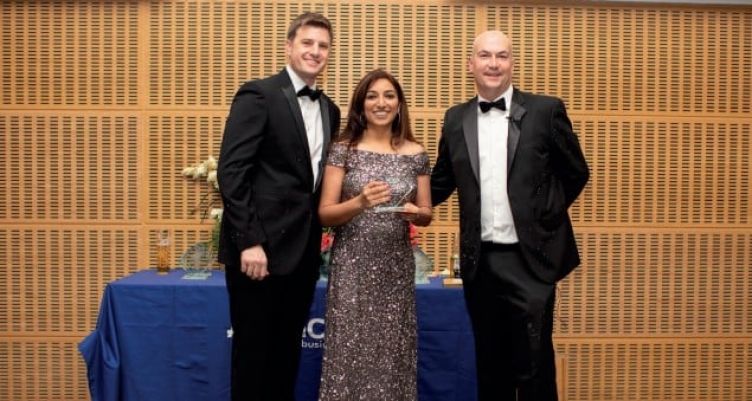 Mitali Chopra had 17 years of a successful corporate career in India and the UK before finally plucking up the courage to start her own business.

After meeting with an Action Coach and realising the potential positive social impact she could have, today she celebrates her successes and reflects on all she has achieved in just over three years.

Mitali explains: “I was always determined to create a business that would have an overwhelming impact on my clients and their lives. It was extremely important for me to find something to allow me to do that, while also creating a difference to my own life. With my most recent success of one of my clients being named UK Entrepreneur of the Year this is just the beginning for my ActionCOACH franchise.”

Turning her life around

Her husband, Chetan, worked for HSBC and in early 2015 the family moved to London, giving her the impetus to turn her life around. Mitali says: “The move gave me the chance to follow a dream of mine - I had three specific wishes.

“Firstly, I met an executive coach many years ago who really made an impression and it was always in the back of my mind that business coaching could be a great profession. I had worked with the small and medium-sized enterprise sector for a long time and, more often than not, the basics of business were missing and I knew I could help them grow and flourish.

“Secondly, I’d wanted my own business for a long time and it was an ideal time to pursue that. Thirdly, I was determined, whatever I did, that it needed to make a significant impact on the lives of others.”

In November 2015, Mitali went to The Business Start-up Show at ExCeL, London to understand the SME landscape.

Although she wasn’t looking for a franchise, she attended an Action Coach’s seminar on how to build a sales and marketing machine, where she spoke about her journey with ActionCOACH. Mitali instantly connected with her story and started researching further into the franchise.

“I’d never considered a franchise over starting my own business from scratch, but I soon began to realise it gives you so much support and a springboard to success,” she says.

“I continued my research into ActionCOACH and reached out to several franchise partners - I wanted to make an informed decision before I took the next step. When I met the ActionCOACH UK Support Team at a discovery day, I was already convinced that joining ActionCOACH was going to tick all the boxes for me.”

“I’d been told by every franchise partner I spoke with how the ActionCOACH community was very inclusive and supportive, but I didn’t completely believe them until I experienced it for myself,” Mitali adds. “During my initial franchise training, I was amazed by the team environment and I’m still amazed today by their collaborative nature.

“I launched my ActionCOACH business in August 2016 and, within eight weeks, had signed up five one-to-one coaching clients. I followed the marketing advice in my training and my first client came from ActionCOACH’s exclusive client generation centre.

“My clients come from a range of sectors and they’re all at different stages of the business lifecycle. The work I do is life changing for all the 22 clients I work with today. They understand their business better, improve profitability, enjoy work more and can see the possibility of more growth and financial freedom in the future.”

Mitali’s success has stemmed from her self motivation. After moving to an office space in Greenwich and growing her team to include a Business Development Manager, admin and marketing support roles, there’s no stopping her. In 2019, the results from her coaching created 56 additional jobs in the local community.

“I’ve reached a level of income triple of what I earned in my corporate career,” Mitali says. “Like any other business, of course, there are peaks and troughs, but I’ve had consistent growth since I launched.

“But I don’t measure my success on my income - it’s about the results my clients have experienced. My ‘champions’, as I fondly call them, are achieving growth and improved profitability, while getting more personal time out.

“A creative agency improved their profits 300 per cent and got successfully acquired by a publicly listed company. I coach Luke Murfitt in his cleaning business and he’s just been named UK Entrepreneur of the Year. He’s gone from the job centre to winning this award in 22 months, seeing a growth of 650 per cent in his business and bringing 39 mothers back to work - all while going through a personal battle with Parkinson’s. It’s no wonder he won and it was incredible to be part of his journey.”

Mitali’s work clearly has the impact she so desperately craved. In three and a half years, she has worked with hundreds of businesspeople in her local area and for every client she signs she sponsors a child’s education in India. 66 children have received scholarships so far, thanks to the growth of her ActionCOACH business. But perhaps the biggest impact is the one it’s had on her personal life.

“ActionCOACH gives me a great work-life balance,” Mitali says. “I stick to typical office hours in the week, which gives me the chance to spend quality time with my family. Our goal is to travel to 100 cities across the world, exploring local culture and cuisine. We have been to 63, so we’re edging ever closer to our target, but still have a way to go.

“My son is a professional squash player and it’s great to have the flexibility to travel for his tournaments. It’s important for us, as a family, to appreciate the time we get to spend together. It’s amazing to be able to build a successful business and provide the best opportunity for my son to thrive too.”

If you want to build a business that creates a significant impact and you’re the kind of person who:
A. Loves learning and helping people;
B. Has enjoyed success in your career or sport; and
C. Is willing to invest if they see substantial returns can be made…
Then find out more by watching the overview video at actioncoach.co.uk/overview