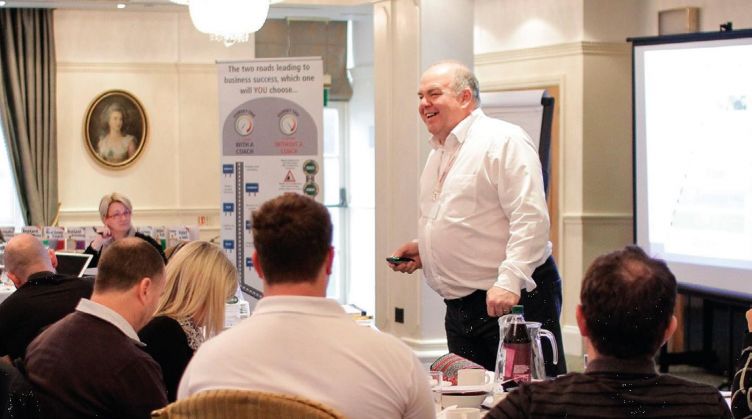 “I decided to put my clients first, to help them achieve their goals and change lives, rather than put the growth of my business first - their success would ultimately make my business a success," says Marc

Marc Eccles has spent 30 years as a business owner, experiencing all the ups and downs.

Now, he’s able to enjoy the fruits of his own labour, while continuing to build an empire to be proud of. The road to success started when Marc was running his electrical business and he happened to meet Action Coach Kent Rhodes at a BNI networking meeting.

Marc explains: “My electrical business was a bit of a roller-coaster ride. In 2009, I was invited to a networking meeting and met Kent. I liked him and liked the sound of having someone help me work on the business - in particular, the thought of having someone as a sounding board really appealed to me.

“I began to take control of the business with Kent’s help and a couple of years later I went to see ActionCOACH Global Founder, Brad Sugars, speak at an event. He inspired me to become a business coach myself. After 20 years of being a business owner, I knew I could use ActionCOACH’s systems and help other business owners too - like Kent had helped me.”

Kent advised Marc on taking the business to a place where he could comfortably step out of day-to-day duties. After recruiting an Operations Manager in 2015, that was made possible and Marc launched his ActionCOACH business in East Anglia in January 2016.

Embarking on a new adventure

Marc was ready to embark on his venture into business coaching. He travelled to Las Vegas to complete his training at ActionCOACH University.

“Six years of being coached by one of the best-liked and most highly respected Action Coaches felt like great training to become a business growth coach myself but, of course, I went through the formal franchise training too,” Marc says.

“I decided to put my clients first, to help them achieve their goals and change lives, rather than put the growth of my business first - their success would ultimately make my business a success.”

Marc then went on to create a networking group of his own, something a bit different to BNI. He wanted to attract some smaller businesses, who would eventually feed into group coaching and oneto- one coaching as they grew.

“Finding your feet during the first 12 months of the business is important,” Marc says. “I had aimed to grow to £6,000 a month of client bankings, as I was still working part-time in my electrical business.

“I got my first clients through networking with BNI and using ActionCOACH’s exclusive client generation centre. I hit my goal by month six and kept the coaching going at that level until the end of the year, while my other business took time to bed down without me.

“In 2017, my daughter, Georgia, came on board to support me and focus on the client relationship aspect of business - we refer to her as the Client Success Manager. What she does is really important - supporting the clients and holding me to account to make sure I continue to do a great job. It’s added a special dynamic to our daddaughter relationship.”

Two years into his business, Marc had implemented a BookCLUB, secured 12 group coaching clients and 11 one-to-one coaching clients, generating monthly bankings of just over £20,000. However, it was another advancement of the ActionCOACH model that allowed Marc to go one step further.

Taking things to the next level

In October 2018, ActionCOACH introduced an exclusive territory Firm Builder licence, which allows franchise partners to build a firm of employee coaches in an area containing 10,000 business owners. Not only did it boost the number of clients, but it opened up the doors for growing the team and creating foundations for the future.

“I invested in the new licence, as I wanted to take things to the next level and create a business with longevity,” Marc says. “It was all about preparing things for the future and giving my family an asset.

“My youngest daughter, Abbie, joined in August, running our events. As they’re the bread and butter of coaching, her role is crucial. And it’s great to offer that to my daughter - to see her flourishing in a job that allows her to be creative makes me happy. She’s a great people person too and enjoys interacting with clients - another vital cog in the wheel that keeps the machine turning.

“I don’t think of myself as just a coach any more. It’s caused a shift in my mindset and I’m aiming to build the business to a level of success that means I can begin to take a step back, building a team like I did in my electrical business.”

Marc currently works with 34 clients across one-to-one and group coaching sessions. With his own shift in attitude, it’s that exact mindset he wants to share with his clients. In August 2019, his firm was ranked as 49th out of over 1,000 ActionCOACH businesses in the world and has stayed in the top 100 ever since. It’s this success he’s planning on continuing for years to come.

“My 2020 plan is to get things set in stone,” Marc says. “I’m hoping to replicate the same success I had with my electrical company, which allowed me to take a step back from day-to-day operations. My main contact with my electrical business now is as their business coach, where we’ve been able to implement a 55 per cent growth in turnover and a massive 1,200 per cent increase in net profit.

“As I prepare for the future of my ActionCOACH business, I’ll be bringing in a Managing Director and a Business Development Manager to free up my time.” And there’s no prizes for who is in pole position to step up to those roles. Georgia is in the running to take over as Managing Director and Abbie is being primed to take on the Business Development Manager role.

“Under the wing of ActionCOACH’s sales guru Jon Asquith, Abbie has been undertaking an apprenticeship, preparing her for when the moment comes to take charge of sales and marketing,” Marc says.

“The extra support that’s come from the UK franchise team has been second to none and it’s constantly developing. I’m proud of how far we’ve come and I’m excited for the future of my ActionCOACH business.”

At a glance ActionCOACH/h3> Established: 1993 in Australia. 2001 in UK Number of franchised outlets: 240 in UK Location of units: UK-wide Investment range: £69,000 Minimum required capital: £20,000 Contact: If you want to build a business with scalability and longevity and you’re the kind of person who: A. Loves learning and developing yourself; B. Has enjoyed success in your career or sport; and C. Is willing to invest if they see substantial returns can be made… Then find out more by watching the overview video at actioncoach.co.uk/overview