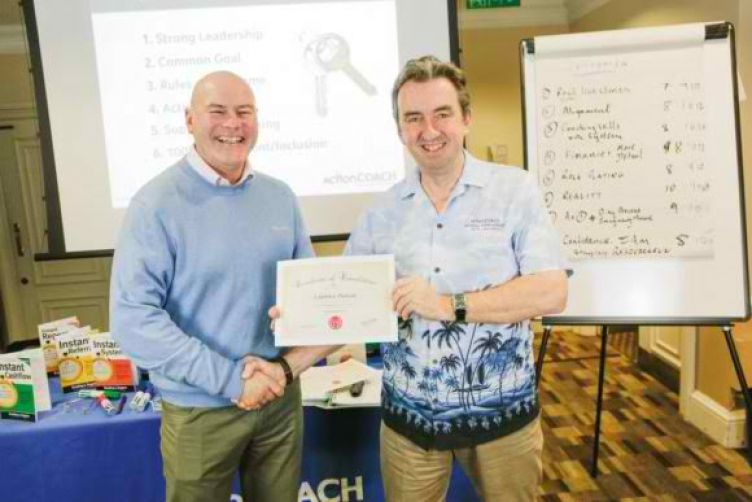 Immediately prior to purchasing his ActionCOACH franchise, Laurence Duncan spent a decade specialising in the renewable energy sector.

Laurence says: “I began to realise I was living by other people’s agendas. I wanted to take control of the direction my life was going, not be at the beck and call of others or subject to the fallout from changing government legislation. In short, I wanted to take charge and lead my life, rather than just be a hostage to fortune.

“Funnily enough, my clients often feel very similar to how I felt then. Hiring an ActionCOACH means they are taking control, rather than being abused by their businesses.

“ActionCOACH is a solution for them and, as I saw the renewable energy project coming to an end, I began to look at ActionCOACH as an option for my future.”

Laurence questioned the benefits of being part of a franchise, rather than setting up on his own during his due diligence. ActionCOACH’s culture seemed supportive and every franchise owner he spoke to mentioned several aspects of their 14 Points of Culture.

“The franchise gives you several things - community, training, innovation and encouragement,” Laurence says. “Community is probably the most important factor for me and being able to reach out to other Action Coaches or the 60-strong UK support team is awesome.

“The training is fantastic, with world class regular webinars and MasterCLASSES. It gives me confidence to know I am delivering cutting edge material.

The ActionCOACH offering keeps on growing with innovations such as the Engage & Grow employee engagement programme and PlanningCLUB.

“Encouragement is probably the least talked about benefit but, to me, is crucial. Everything I have dreamt of doing has been backed up by my peers and colleagues.

“When I began my ActionCOACH business in October 2015, I took on the mantra that the system works, it’s what I’ve paid for, let’s stick to it and have some fun!

“The past year has been a rollercoaster. You go through a massive amount of personal change and development and really have to question personal attitudes, personal habits and the way you approach business.

“I signed my first client, a close friend of mine, very quickly after training, which allowed me to make mistakes that were forgiven easily.

This improved my confidence and allowed me to experiment and become a better business coach in a shorter period of time.

“My clients began to show significant improvements in their work-life balance, the performance of their businesses and teams.”

Laurence has set himself a goal to grow to 12 one-to-one coaching clients by the end of year one. He defined personal success as having enough money to pay the mortgage, whilst developing a business he enjoyed.

“Having fun in my everyday work is really important to me, something I’ve dreamed of, but never thought I would achieve,” Laurence says. “Now I choose to work with business owners who are like me, so we build good personal relationships. I consider myself to be an extremely lucky person.

“My biggest learning and lightbulb moment was at ActionCOACH’s Business Excellence Forum & Awards this year, when the overriding message was the fact we coach on emotion rather than results.

“I am all about emotion, with results following. So it was fantastic to learn this actually was an acceptable way to work with my clients. It further reinforced my self-confidence and made me realise my efforts at lifting people’s days and making them smile were not wasted, but central to my success as an Action Coach.

“There have been several memorable moments, including hitting my 12-month client target. Taking seven of my clients to The Business Excellence Forum & Awards this year probably tops the list.

“Seven strangers with only me to link them together, standing formally and rigidly shaking hands on Wednesday night. Seven friends hugging each other and looking forward to seeing each other at next year’s conference on Friday evening - what an amazing transformation. Have I got seven clients for another 12 months? Definitely.”

Laurence has set himself new goals for his ActionCOACH business and he hopes to break records later in 2017 when the Global Founder and Chairman of ActionCOACH, Brad Sugars, tours the UK.

“My plans for the coming year include adding to my existing 14 clients and recruiting a full-time business coach to work with me,” Laurence says.

“My idea is to leverage off Brad Sugars’ event in November, where he will be presenting at the Leicester Tigers Stadium, to generate 10 clients for my employee coach. The way I intend to do this is to put 400 people into the event. This has never been done before, but that doesn’t mean it won’t be done this year. Watch this space.

“I’ve achieved my personal business goals through persistence, following the system, and learning to not take myself too seriously and have some fun.

“There was so much good advice when I started, I tried to chase all of it instead of finding my own flow. Having said that, would I be the coach I am now if I had not been through the trials and tribulations of my formative months?

“I have yet to lose a single client, something I’m very proud of, and I recently became 1 of 35 UK Coaches in The ActionCOACH Global Top 100!”

Clients are certainly appreciating the difference ActionCOACH and Laurence Duncan are making. Here’s what Melanie Millin, Founder of Love Kombucha, has to say:

“ Laurence has really helped me get to grips with the nuts and bolts of my business. Thanks to the controls we have implemented together, I am now able to work on business improvement and strategy rather than my business running me! For anyone who knows me, this is quite an achievement! I look forward to our continued working relationship, thank you!”