This female entrepreneur thought her glass was full 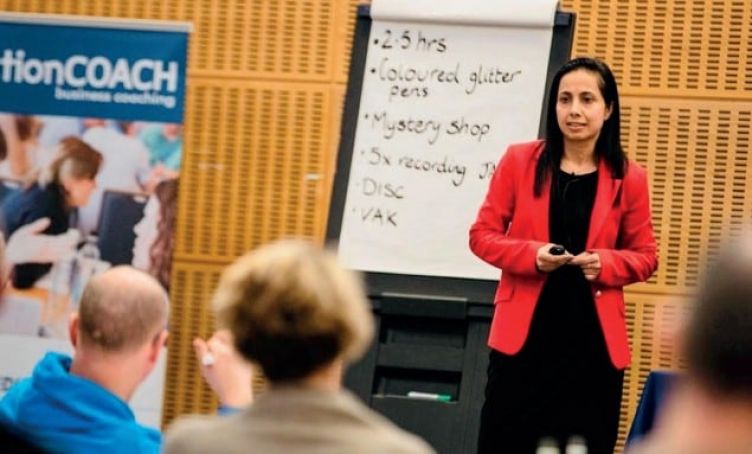 "That was until I discovered ActionCOACH. Now I’m ready to pour more into my life," Anu Khanna says

Before Anu Khanna found her true calling with ActionCOACH, she considered her brain to be brimming with knowledge. However, upon discovering the world’s number one business coaching franchise, she quickly realised her glass was only half full - she was ready to pour more into her life.

Anu says: “The main impact ActionCOACH has had on me is who I’m becoming. When I joined the network, I thought my glass was full, but being exposed to the precision and detail within the franchise model, I became aware of how much work there was left to do. It’s miles away from the stage I was operating at in the corporate world and it’s completely turned my life around.”

Anu grew up in Singapore and moved to India to study for her degree in commerce and two MBAs. Her passion and drive led her to join IKEA. Anu came to the UK to launch the retail store in Coventry, before ending up in Switzerland as a coach for senior management. It was in this role that Anu really got into her stride.

When her son was preparing to choose his GCSE subjects, Anu considered moving back to the UK to give him the best education possible. IKEA was happy to oblige, agreeing to help Anu and her family relocate.

However, as there wasn’t a position available with the company for her in the UK immediately, Anu had the chance to consider other options. Her husband, Raj, was the one to suggest ActionCOACH.

“Raj knew I would excel in this role,” Anu says. “I wasn’t necessarily looking for something new, but I’d always had a passion for coaching, so thought I could definitely apply my expertise to build a successful business.

“I booked into a discovery day and both Raj and I left extremely impressed. It was great to discover the aspects of the franchise model I would be adopting in the future.

“I spoke with another Action Coach to discover more. I instantly connected with their story, which filled me with inspiration. After that meeting, I knew ActionCOACH was what I was destined to do.”

Topping up her glass

Despite Anu’s experience in coaching and after spending many years establishing an extensive business skillset, she recognised the myriad of expertise she would be able to tap into. Anu was awarded her franchise in May 2018 and, soon after, was ready to embark on her training at ActionCOACH University.

“Even after spending so much time within the coaching world, there was still a plethora of aspects for me to learn,” Anu says. “The training programme was extremely comprehensive, albeit intense, but it only made me more eager to get going. I thrive most when putting things into practice and being in front of people - I was confident I could make my franchise a success.

“When I arrived home, I joined a BNI group, which was how I signed my first client. It felt amazing to get a confidence boost straight away and it only made me determined to go bigger and better.

“From that point onwards, my business grew naturally, with many of my clients joining through recommendations. I underestimated the power of word of mouth and seeing it in action was very rewarding. The relationships with those clients, in particular, have been strong right from the outset, which results in our work together being much more impactful.”

For the first two years in her business, Anu focused on creating an all-star team around her.

With four members already, including two Business Development Managers, a Marketing Specialist and an Executive Creative PA, Anu has plans to bring in more employees. She understands the importance of synergising teams and leading by example.

“I have to demonstrate that I’m adopting the ActionCOACH systems in my own business to highlight how it works,” Anu says. “I’m doing exactly the same as what I’m telling my clients to do, practising what I preach as they look to me as the expert.

“I’ve created a substantial client base I’m extremely proud of, including businesses with a revenue from £70,000 to £70 million.

“I deliver one-to-one coaching with 15 businesses in the area and have recently started training leader programmes, but perhaps the best part is being able to offer something for everyone.

“I host several group coaching sessions, such as 90-day planning, and I’ve recently launched a BookCLUB. Combining all these aspects, I’m comfortably earning more than I did in the corporate world and I’m determined to grow further.

“When the moment arrives where my diary is fully booked, I will bring an employee business coach into the team so we can support more business owners in the community.”

It’s not only Anu’s career that has been transformed, her home life has too. The flexibility of ActionCOACH has given her the freedom to take daughter Kyra (9) and son Kabir (15) to school each day.

“My life has changed for the better,” Anu says. “In my previous role, I would never be able to wind down. My days were extremely long, meaning I missed out on family time whilst my children were growing up. Now’s my chance to make up for it.”

Anu is the first to admit that, due to the support she’s received from the franchisor, fellow franchise partners and her coach’s coach James Vincent, she’s been able to thrive in her business.

“I have a lot to thank James for - he’s played a massive part in the success I’m seeing within my own business,” Anu says “He’s a very successful coach and his expertise is second to none.

“It’s refreshing to see how the word ‘community’ is not just on paper, it’s part of our reality. Action Coaches are always willing to share, help each other succeed and have some fun along the way - although my glass is being topped up every day, I now know my life has an infinite capacity.”

If you want to build a business with scalability and longevity, make a difference in your local community and you’re the kind of person who:
A. Loves learning and developing yourself;
B. Has enjoyed success in your career or sport; and
C. Is willing to invest if you see substantial returns can be made…

Then find out more by watching the overview video at actioncoach.co.uk/overview