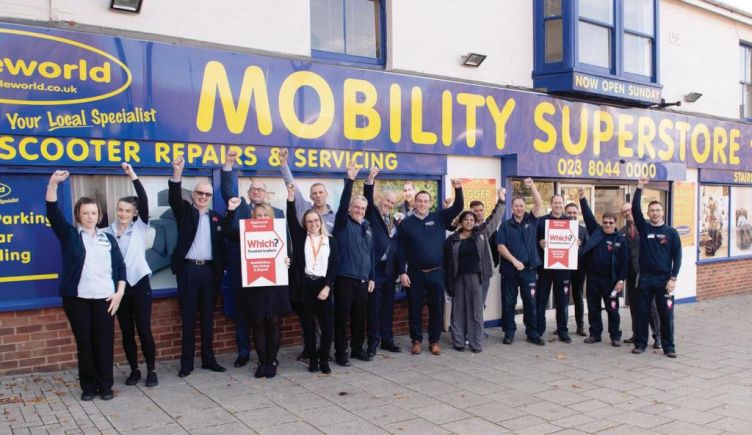 For Ableworld franchisees Jeff and Steven Newman, the sky is the limit

Jeff and Steven Newman of Ableworld Southampton have just celebrated their first five years as franchisees by breaking the company record for weekly sales. Earlier in the year, they became Ableworld’s first million pound store. Perhaps unsurprisingly, they were also awarded Ableworld’s Franchise of the Year in March. So how did it all begin and what’s next?

Jeff, whose previous career had been as a milkman, recognised that many of his previous customers were also potential purchasers of mobility equipment. He teamed up with his son, Steven, who had been in the construction industry and together they purchased an Ableworld Franchise for the Southampton region.

A suitable property was located and trading commenced at the end of May 2014. Jeff says: “Having had daily contact with elderly and disabled customers in my previous occupation, I witnessed several fall injuries and mobility complaints.

“With our store having good parking and being on several main bus routes, I believed our highly visible and accessible superstore would fill a gap in the market and serve as a welcome benefit to the community.”

Looking back, how does Jeff feel the enterprise has gone?

“It has met all our expectations,” he told us, “especially the satisfaction we get from providing the right products for our customers.” Numbers-wise Jeff and the team have consistently hit and beaten budget and have proved that their initial thoughts about the viability of having a modern, one-stop mobility store in Southampton were correct.

Of course, there have been challenges. Getting the marketing mix right has been one of the big ones, but with the help of the franchisor’s marketing team Jeff feels they now have a much better grasp on where their marketing budget is best spent.

In fact, an increasing amount of the store’s turnover is now repeat business and it has received numerous testimonials from satisfied customers, which has led to word of mouth recommendations.

What about the future? Steven says he sees continuous growth for the company. Both he and his father have big plans and after a lot of hard work in setting up the right infrastructure it’s time to branch out.

“We can’t think of any limit and we only limit ourselves,” Steven says. “We do want a very large company all the way down the south coast. This is our first one and it’s been amazing and has exceeded our expectations. We’ve put a lot of hard work into it and now we’re up to a level where we can start looking at other places to launch.”

The market for Ableworld’s products, such as mobility scooters, wheelchairs, home aids and other specialist mobility equipment, is growing rapidly as the population of the UK increases and ages.

Ableworld, the country’s largest retail mobility chain, is in the right place to capitalise on that growth. Franchisees like Southampton prove that with hard work the sky is the limit.