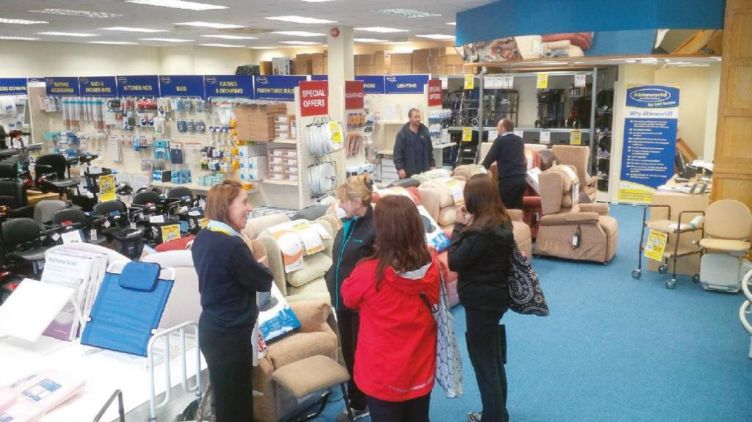 As they age, a large number of people will require the products and services Ableworld supplies

Is ‘growth’ something of interest to you when looking for a business to invest in? If so, you may be interested in looking at a retail franchise that offers products and services that are virtually guaranteed to grow over the next 10 years and beyond.

The mobility retail sector is set to grow dramatically over the next few years. Government statistics show what we all know - the UK population is growing and people are living longer. As they age, a large number of people will require the products and services Ableworld supplies.

The market for mobility equipment such as scooters, wheelchairs and stairlifts is estimated to be worth at least £1.5 billion in the UK and is growing year by year.

There is a demographic bulge (the so called ‘baby boomers’) reaching an age where mobility and home care products are frequently needed. The number of people aged 65 and over is set to rise by over 40 per cent in the next 17 years to 16 million, which will create unprecedented demand for mobility equipment.

In addition to these powerful demographic factors, the government’s stated aim is to help people live independent lives in their own homes.

All these factors mean more people will need products and services such as:

All these are provided by Ableworld and its network of franchisees.

Identifying a gap in the mobility market for professionally managed retail outlets, Mike opened Ableworld’s first store in 2001 and the company has subsequently grown to become the UK’s leading mobility retailer.

In 2008 Ableworld awarded its first franchise, to Andy Rees in Birkenhead.

Andy, who had previously been in the armed services and run a furniture store, saw the enormous potential that exists in the mobility sector. He diligently researched the market and eventually decided he wanted to team up with Ableworld.

Andy says: “Franchising is a great way to start in business, because you get the expertise and backing from people who have ‘been there, done that’. They have systems and processes that have worked in the past and which we have proved can work in the future.”

Ableworld decided on the back of its success with Andy to go into franchising in a more formal way. The company successfully applied for membership of the British Franchise Association in 2010 and started its nationwide search for other franchise partners.

In 2014 the bfa selected Ableworld as one of its emerging franchisors of the year. The company now has 33 stores across the country, from as far north as Inverness in the Highlands of Scotland to its latest store, Bournemouth, on the south coast of England.

Bournemouth is joining a network that’s seeing impressive year on year growth in sales for existing stores, including Southampton, which was named Ableworld’s Franchise of the Year and is on course to break the £1 million turnover figure this year.