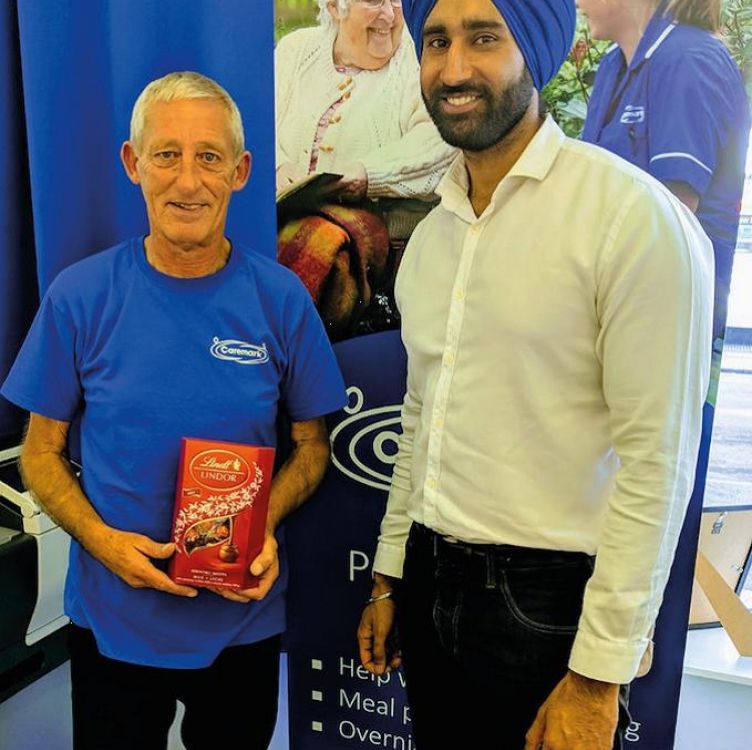 Raspinder Singh, 29, launched his Caremark franchise in his hometown of Gravesend, Kent in February 2018. It’s already thriving, with care worker retention and community outreach at the core of his business and an industry recognised award under his belt.

“My first year in business has exceeded my expectations,” Raspinder says. “The care industry is one of the most challenging sectors to operate a business in, with more demand than suppliers can currently meet.

“According to the Financial Conduct Authority, it’s estimated that by 2040, one in seven UK citizens will be aged 75 or over, so demand for high quality care is only going to increase.”

Raspinder began his career as a financial analyst, having completed a degree in accounting and finance. But before long he realised that, instead of feeling fulfilled by his career path, he was essentially ‘ticking boxes’.

“I took a step back to reassess my priorities,” Raspinder says. “I’ve always been entrepreneurially minded and take pride in supporting others - I’m an integral member of the Sikh community and had been working with my local temple as a volunteer. This opened my eyes to the support I could offer to the vulnerable residents in the area - launching a care business would combine my passion for supporting others with my determination to succeed.”

Raspinder considered the options available to him and opted to invest in a franchise that most suited his values.

“A Caremark franchise appealed to me,” he says. “The brand is respected within the care community, but I was more intrigued by the level of support available. I was instantly impressed by the collaborative nature of the network - everyone was more than happy to exchange best practice.”

Raspinder’s initial business plan incorporated a projected rate of growth. Within nine months, he had increased client hours from zero to 500 per week. In addition and in line with his original estimations, care workers have consistently joined the team. But despite this rapid growth, it’s the quick rate at which his Caremark franchise is able to support charitable causes, that continues to drive Raspinder to achieve.

“My priority as a business owner was to put my standing in the community to good use by regularly contributing to local and national charities,” he says. “Within months of launching the business, we had submitted our first financial grant. That gave me an immense sense of satisfaction and continues to do so one year in. While this benefits those who certainly deserve the support, it also raises the profile of the business and increases the credibility of our brand.”

As a testament to Raspinder’s dedication, he was named the Caremark ‘Rising Star’ at its annual conference, for demonstrating early promise and commitment to the local community.

He adds: “We’ve come so far in one year and I can say, hand on heart, this is just the beginning.”

At a Glance Caremark