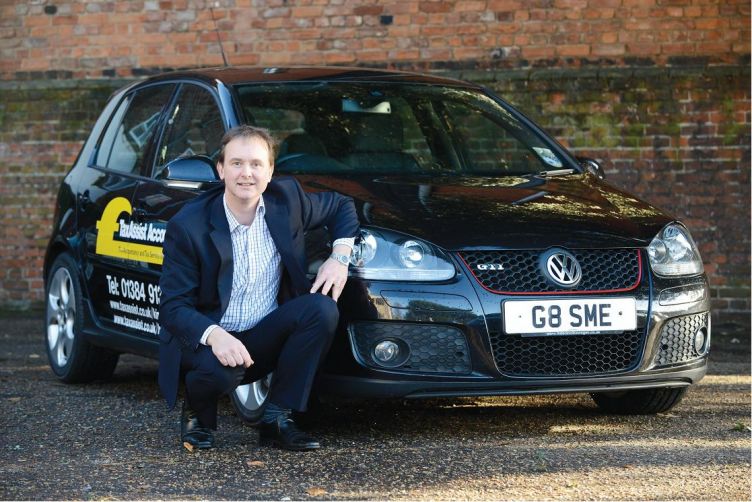 According to Mike Lawson, who has recently retired after selling his TaxAssist Accountants franchise to neighbouring franchisee Lloyd Evans: “The last 12 years have been fantastic.

“The decision I made in early 2003 was the best business/career decision I ever made and we have not regretted it for a minute.”

Mike initially discovered TaxAssist in 2002 after becoming disillusioned with the job he had and was looking to do something different. Mike adds: “I was from a tax background and when I saw a TaxAssist advert I thought: ‘I could do that’.

“My wife Gill and I did some research, went to a discovery day and were sold on the concept. The idea of working for ourselves and hopefully having a better quality of life was very attractive. After considering the options for a couple of months, we decided to take the plunge.”

Mike joined TaxAssist in 2003 and operated from a shop in Finchfield near Wolverhampton. “Being part of TaxAssist has been a great benefit,” he says. “We had 12 enjoyable years - the most enjoyable of my career. It has provided a great quality of life, we met a lot of nice people and the financial rewards have enabled us to enjoy a good standard of living and retire a little earlier than anticipated.

“I often wished I had been 15 years younger when I joined the franchise, which would have helped me expand the business a bit more.”

Mike’s advice to potential franchisees? “Go for it,” he says. “It will be hard work, but if you’re happy to do this, you will enjoy a rewarding career. I have never had any hesitation in recommending the franchise to anyone who has asked for my opinion. We will miss the support and comradeship we have enjoyed. It has been a fantastic journey.”

TaxAssist, which has been operating successfully for 21 years, was established when the founder realised small businesses were often overcharged by the larger practices and underserviced by the smaller ones and that catering for this market would be ideal for a franchise network.

Services offered include year-end accounts, tax returns, bookkeeping, VAT returns, payroll and cash flow projections. After consistently winning awards in both the franchising and accountancy sectors, TaxAssist has grown to become the largest network of accountants in the UK specifically servicing small businesses and caters for over 60,000 clients from over 250 shops and offices.

With an established brand and known for breaking with tradition, challenging the market and daring to be different, in an industry that has not experienced this before, TaxAssist stands out from the crowd. Franchisees operate from highly visible, accessible and welcoming shopfront premises, which have been designed specifically to appeal to the small business target market.

Lloyd Evans, who already had his own TaxAssist franchise in Kingswinford in the West Midlands, purchased Mike and Gill’s business. He joined TaxAssist in 2012, following a wish to build a business of his own where he had the majority stake and where he could use his skills and experience gained over many years.

“I knew the benefits of being involved with a quality franchise, so I turned to that sector for my inspiration,” Lloyd says. “I looked at a variety of businesses within franchising, but none of them gave me that spark until I looked at TaxAssist.

“I felt I could use my experience gained from working within a professional accountancy practice and I enjoy the buzz associated with helping small businesses. I also knew of the high reputation of the management team, plus the strength of the brand and business model. This was supported by many awards, gained from both within and outside the franchise industry.

“After meeting the team, I was convinced this was the right opportunity for me. That’s where the excitement and hard work really started. The initial six-week training course was intense and helped prepare me for a life back in the accountancy practice world. I also met other like-minded people who I got to know and develop a friendship with.

“The initial course was as much about getting to know and build relationships with the support team in Norwich, as it was about the technical and practical aspects of owning and operating a TaxAssist franchise.

“Ongoing technical training courses are available across a variety of topics, which help to ensure technical knowledge is enhanced. This is supported by a technical helpdesk. Marketing support has been excellent, with practical guidance being available at the end of a telephone.

“TaxAssist were particularly helpful when we were setting up the shop. Since then we have picked their brains a number of times for marketing ideas and guidance. The directors have been particularly helpful - they’re extremely supportive and genuine people with high levels of integrity.

“Mike and I had been discussing his impending retirement for some time and I had expressed an interest in his business when he felt it was the right time for him. We began serious discussions in February 2015, following the usual January deadline rush.

“From that time we maintained close contact to ensure due diligence could be completed and preparing for the eventual sale. Initial discussions with the TaxAssist support centre were invaluable during this time to explore ideas and learn from their experience.

“Undertaking this process as an independent business would have been considerably more onerous. The support centre team were always on hand to advise on any matter, while ensuring they preserved their independence, given the deal was between two existing franchisees.

“One of my concerns in acquiring a new business was the effect this would have on my existing business. However, due in no short measure to the quality and commitment of my existing team, any negative effects were minimal. The Kingswinford business continued to grow during the due diligence and acquisition process.

“We completed the deal on October 1, 2015, with Mike and Gill helping with the initial handover to ensure as smooth a transition as possible. We have continued to operate from the same shopfront premises as Mike and Gill and the business has continued to develop since the acquisition.

“We have taken on 19 new clients in April 2016 alone. A third employee has joined to help handle ongoing workload as a result of the continued growth of the business. Both businesses have continued to thrive since the acquisition and I’m looking to expand the business further.”

The TaxAssist support package includes initial and ongoing training for franchisees and their staff. In addition, there are helplines providing comprehensive support on accounting and tax issues, a lead generation service, marketing tool kits, localised and national PR and a raft of additional service providers for franchisees to offer an enhanced service to their clients.

TaxAssist takes on both accountants and business/finance professionals and has found they make equally good franchisees. Franchisees can employ accountants while they concentrate on building the business, holding client meetings and networking. What is important is that candidates have plenty of energy, a friendly persona, are technically competent and have a desire to succeed.

The Franchise fee to join TaxAssist is £36,950 (plus VAT) and allows franchisees to work from a commercial office and then move to a shopfront by the end of their third year.

Alternatively, franchisees can open a shopfront from day one, allowing their business to grow faster. Full support and advice is available to help with business planning and finance raising and TaxAssist works closely with franchisees to help them achieve their goals and aspirations.

If you would like to find out more about the TaxAssist franchise, call Jody Macmillan for an informal chat. The next step would then be to attend a discovery day at the company’s support centre in Norwich, where you will be provided with more details and get to meet with one or more of the directors of the franchise. You will also be provided with a full list of franchisees for you to speak with as part of the research process.