Close
Did you know?
One Stop has outlets available across the UK 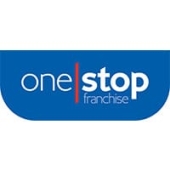 One Stop is a retail convenience business with over 950 stores throughout the UK, open seven days a week. Whether you want to pick up your breakfast and a newspaper or something for your evening meal and a bottle of wine, One Stop is open early to late (often 6am to 11pm) and has something for everyone, including its own-label products.

One Stop was opened up for franchising in January 2014 and opened its 100th franchise store in May 2015. Today it operates in England, Wales and, since 2015, in Scotland.

One Stop is an associate member of the British Franchise Organisation (BFA).

Who is behind the One Stop franchise?

One Stop began life as a cigarette kiosk at Cannock Market, run by Kevin Threlfall, who registered T. & S. (Tobacco) Ltd., in October 1975. Soon after, he launched the Lo-Cost Discount Stores chain of convenience stores, which he later sold to Oriel Foods. With David Lockett-Smith, he then set up Walsall-based T&S Stores and built up the company to 49 stores by the time it was listed on the Unlisted Securities Market in 1984.

In May 1989, T&S Stores acquired Dillons and Alfred Preedy newsagents chains for £53.9m, making it the fifth largest business in the CTN (confectionery, tobacco and newspaper) sector. T&S also owned Cut Price Cigarettes, which they rebranded Supercigs, and acquired M&W in 1997. Another acquisition was One Stop Trading, which had 218 stores in the south of England and was owned by Portsmouth & Sunderland Newspaper Group and was purchased by T&S in May 1999.

Although it remains a subsidiary and its recruitment is handled by Tesco, One Stop is operated as a separate business, employing over 10,600 people. Today it has over 770 company-operated stores and 160-plus franchisees operating in the UK.

How does the One Stop franchise model work?

The One Stop franchise has grown around the group’s successful formula of independent retailers running their own stores while benefiting from the successful One Stop brand, convenience expertise, support and investment.

To help independents joining the franchise group, there is a period of transition before a premises undergoes a fully project-managed refit — the company investing up to £50,000 to give the store the look and feel of a One Stop while retaining the personality and elements of the old, original store, including the name. By partnering with One Stop, franchisees also gain access to the company’s low-cost operating and distribution model.

One Stop franchisees commit to purchase 95 per cent of their range from One Stop, but are allowed a 5 per cent margin to source products from local suppliers. Multiple deliveries each week — daily on milk and bread and up to six deliveries a week for fresh and frozen produce — ensures that your food supplies are fresh on the shelves.

The partnership gives franchisees a between 18 and 25 per cent margin over their competitors, depending on the store’s mix, thanks to competitive retail pricing and industry-leading promotions.

How much does a One Stop franchise cost?

A One Stop franchise involves no minimum investment, but a weekly cost of £100. One Stop Franchise provides each franchisee with a £50,000 investment with each store they open, to assist with the refit of their site.

What support and training does One Stop offer its franchisees?

One Stop provides a 13-week training programme. A Launch Support Manager is appointed to every One Stop franchisee who will help them transition as smoothly as possible. All Launch Support Managers have operated a One Stop store before and will be able to assist you with the market-leading two-lane EPoS system for a week once it is installed.

Did you know?
One Stop has outlets available across the UK

This user-friendly technology connected to the back office system provides sales and margin reports at a touch, real-time, store-specific planograms and auto replenishment, saving franchisees hours on ordering. Other useful tools measure promotional performance and total business performance reporting, which will help boost sales and offer insight into the best use for every inch of a store.

With the help of the Launch Support Manager, a franchisee and their staff can be trained in using the EPoS, front and back office, and still keep trading legally and safely. They will also help develop the range of stock with the franchisee.

Thereafter, a Business Development Manager will visit every four weeks, spending a minimum of three hours each visit working with franchisees and their store team to help grow sales and improve margins through range and category reviews to add value to the store and help franchisees make the best of One Stop’s market-leading promotional programmes.

The Business Development Manager will also provide indicative profit and loss statements every month, unique to One Stop, which will give franchisees a clear, proactive financial overview.

Support is offered through a seven-day-a-week phone support centre staffed by an expert team who can offer advice on any aspect of running a store.

Is financial aid available for a One Stop franchise?

Partnering an existing business to launch a franchise can make obtaining finance easier than setting up on one’s own. Most banks have a specialist franchising unit who can provide banking and financial support.

Are One Stop franchises available for resale?

Many newcomers to franchising may prefer to purchase an already established business rather than build a new business. You will need to contact One Stop to discover whether there are any One Stop franchises for sale in a territory near you.

What is One Stop looking for in its franchisees?

As part of their expansion programme, One Stop is looking for potential shop sites or outlets it can work with. One Stop is interested in roadside locations in densely populated areas or village and suburb locations with a minimum population of 3,000.

Franchisees are ideally already established as retailers of existing C-stores, CTN+ or Post Offices wishing to move into the convenience sector. One Stop will, however, look at ‘cold start’ properties that lend themselves to conversion. All sites must have between 1,000-3,000 sq. ft. or, if less, an ability to expand. The site must have an alcohol licence or be able to obtain one, while the franchisee must be willing to operate a minimum trading day of 7am to 9pm, Monday to Sunday.

The initial One Stop franchise contract length is for five years, renewable after that period.

How in-demand are One Stop franchises right now?

Research by IGD indicates that the UK’s convenience market is forecast to grow by 17.6 per cent in value between 2018 and 2023, while the value online will rise by more than 50 per cent. The overall food and grocery market is expected to grow by 14.8 per cent to £218.5bn over the five-year period, benefiting from the increase in younger shoppers making smaller but more frequent shopping trips.

Online is expected to rise in value to £17.3bn as more convenience markets scale up their operations to target emerging shopper needs.

Growth will also be driven by physical expansion as retailers establish stores in new areas that offer a more supermarket-like experience to shoppers.

How do I start setting up my own One Stop franchise?

To find out more, or to request further information on franchising with One Stop, click on the ‘Send Enquiry’ button now.

Send a free enquiry to One Stop for further information!