Opening The Door To A New Future 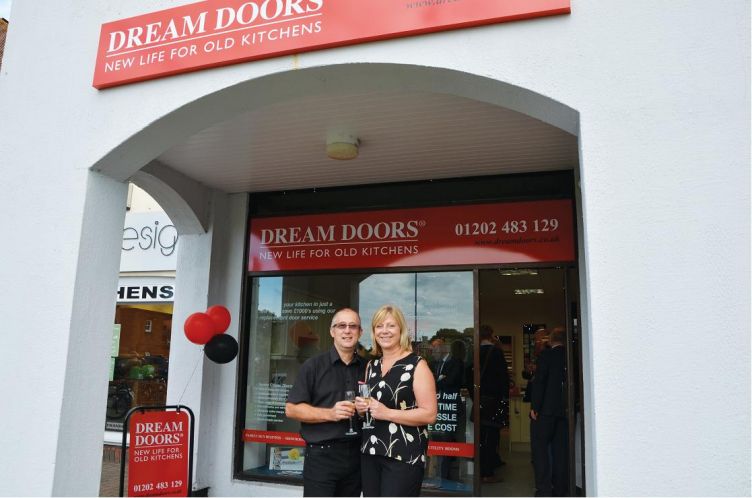 For years, Clive and Angela Coldwell had enjoyed making improvements to their home, but with busy lives as IT executives there was no reason to suppose it wouldn’t remain just an interesting and relaxing hobby.

However, an offer of voluntary redundancy in 2009 was to change things in a pretty dramatic way.

Clive says: “We had both spent many years working in a corporate environment and felt it was time to do something different and start our own business. Home improvement seemed a logical way to go. It seems we made the right decision.

That was to take up the Poole, Dorset franchise of the fast growing kitchen refurbishment company Dream Doors. And once Clive and Angela had made that life changing move they certainly didn’t hang about.

Completing their initial training just before Christmas 2010, their showroom was up and running three months later - the quickest start-up in Dream Doors’ history.

“Business was immediately fantastic - we had sales of £175,000 in the first five months,” Clive remembers. “Everything worked out exactly as we wanted.”

“Achieving these turnovers is amazing,” Angela says. “But sales like these can only be achieved if you have the right support network around you, whether that is staff or suppliers, the franchisor or your family.”

“The Checkatrade award is particularly special,” Clive says. “It’s voted for by the public and shows what a great service we deliver, no matter how many sales we make.”

He recalls: “When we decided to take voluntary redundancy, we wanted a business that would utilise our executive skills and as soon as we began looking for management franchises in the home improvement sector both Angela and I could see Dream Doors was perfectly suited to our experience and abilities.”

Initially they had some reservations about going into retail. Angela explains: “Despite having extensive management experience, selling didn’t come naturally to us, although we get on well with people.

“But this isn’t a hard sell and the training we received helped hugely. Early on, Clive and I felt our skills would better complement the organisational side of the business, so we took on a colleague who was an experienced salesman and we haven’t looked back since.

“Everything about this business is great. We are in a fantastic location with our showroom and have recently opened another franchise in neighbouring Christchurch. We now have a staff of nine and certainly haven’t finished expanding.”

With the slogan ‘New life for old kitchens’, Dream Doors was launched in Hampshire by founder and managing director Troy Tappenden in 1999 after he has seen an advertisement for kitchen refurbishment.

He says: “I could see there was market potential there and had the idea of a business specialising in quality replacement doors, rather than replacing entire kitchen units.”

Clive and Angela say their service appeals especially to older customers who don’t want the major upheaval involved in ripping out an old kitchen.

“By replacing the doors and drawer fronts, we can transform a kitchen at a fraction of the cost of a completely new kitchen, often saving up to 40-50 per cent.” Clive adds.

“We also offer a wide range of worktops, sinks, taps, appliances and lighting, along with full kitchens, bathrooms, offices and bedrooms, all installed by our staff of skilled specialists.”

Launching his franchise network in 2002, Troy says his ideal franchisees are experienced in white collar management, determined and focused, with good organisational and people skills.

Now Dream Doors is the UK’s leading kitchen makeover specialist, with a network of over 70 franchises and close to 50,000 projects completed to date. It’s a winning formula based on transforming an existing kitchen in a couple of days, often without customers even needing to empty their cupboards.

According to the company, turnover has trebled in the past five years. And with 80 per cent of customers in their sixties or older, Dream Doors has a core customer base that’s growing, less affected by any economic uncertainty and with disposable income to spend.

A Dream Doors franchise costs around £75,000, including working capital for marketing and start-up costs. The company says: “The harder you work, the more money you make and there’s a direct correlation between money and reward.”

Studies show that average consumers change their kitchens every 10 years, expecting to spend an average £8,000 and welcome a chance to refurbish their existing kitchens at the fraction of the cost of a complete refit.

Around 95 per cent of franchisees have previously had no kitchen industry experience and as Dream Doors points out: “None is needed because you’ll never have to fit a kitchen and the only tool you’ll need is a tape measure.

“You don’t need to be practical and you won’t be hanging any doors or plumbing in any sinks. This is a sales and management franchise and good communication and management skills are vital and will be put to use managing a team of subcontracted fitters, all sourced locally.
“If selling doesn’t come naturally to you, but you are an effective manager, you have the option to recruit professional sales staff and we will help you find and train the best people to work in your business.”

Indeed, there’s no shortage of franchisees who have proved that lack of previous experience in the kitchen industry is no bar to Dream Doors success. For instance:

Troy says: “There aren’t many businesses that can generate £100,000 in the first 10 weeks or three quarters of a million pounds in its second year. “We think our franchisees’ performances speak for themselves in terms of the profitability of the Dream Doors concept.”

What is the Coldwell’s secret of success? “We don’t turn anything away - from one tap to a complete kitchen,” is how Angela puts it. “You never know what a small job will lead to. You fix a tap and next week you could be asked to put in a new bedroom.”