My franchise story: Kids inspire a career change with a ComputerXplorers franchise 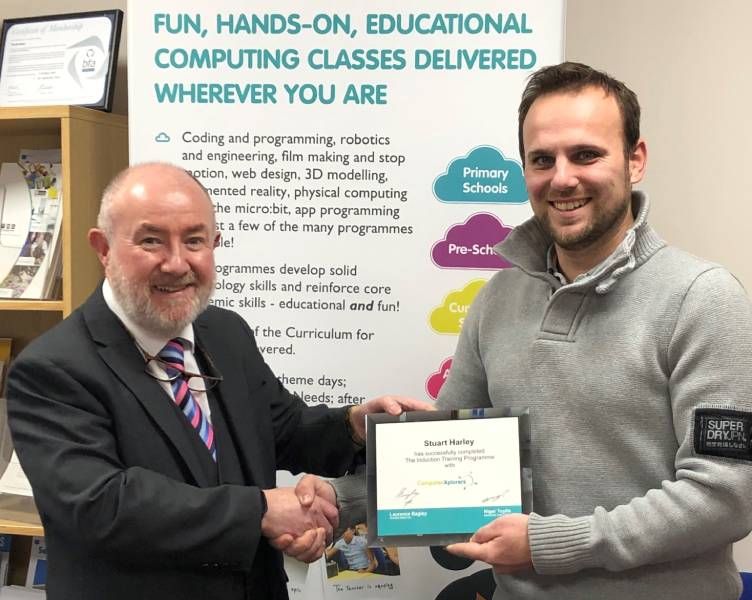 Dad-of-two Stuart Harley is the latest franchisee to join the ComputerXplorers network, providing technology education for children aged three to 13 in the Southampton region

After ten years working as a sales manager in the automotive industry, Stuart was inspired to take on the franchise after watching his young sons aged two and three engage with technology. He left the car industry behind in October 2019 and launched ComputerXplorers Southampton in December. Stuart is already working with a number of schools and nurseries to help children develop important computing skills while having fun.

ComputerXplorers’ lessons are aligned with the national curriculum and provide a focus on coding and programming as well as various other aspects of technology which support wider areas of learning. These include 3D modelling, which can improve spatial awareness and scientific thinking, as well as robotics and creative topics such as animation.

Lessons can be delivered during class time, for instance when teachers are away from the classroom for planning preparation and assessment (PPA) tasks. Stuart also offers afterschool and holiday clubs, and tailored lessons are available for pre-school children as young as three years old in nurseries and playgroups.

ComputerXplorers enables schools to keep pace with the rapidly evolving world of technology education and gives pupils the best possible start in life.

“Technology education is all about building foundational skills that children can build on as their abilities grow,” Stuart explains. “Primary schools need to give pupils opportunities to work independently and creatively with age-appropriate coding and programming platforms. In this way, they can see that technology is not something to ‘learn’ in the traditional sense, but something that can empower them to do exciting and interesting things. ComputerXplorers is geared towards this open-ended style of learning, where children are given guidance then allowed to experiment with their own creations.”

Interest in ComputerXplorers is high, and Stuart is already recruiting more teachers for his team in and around the Southampton area. He plans to extend the business further across the south and south west over the coming years, with the support of the ComputerXplorers head office team.

“I’ve been really impressed with the level of franchisor engagement,” says Stuart. “When I first reached out to the team, they gave me an honest appraisal of the business opportunity, and the training and set-up support has been spot-on. I’ve been able to hit the ground running and secured my first customers quickly thanks to a strong online presence. I’m looking forward to building my business, and it’s reassuring to know that I have such a capable team behind me.”