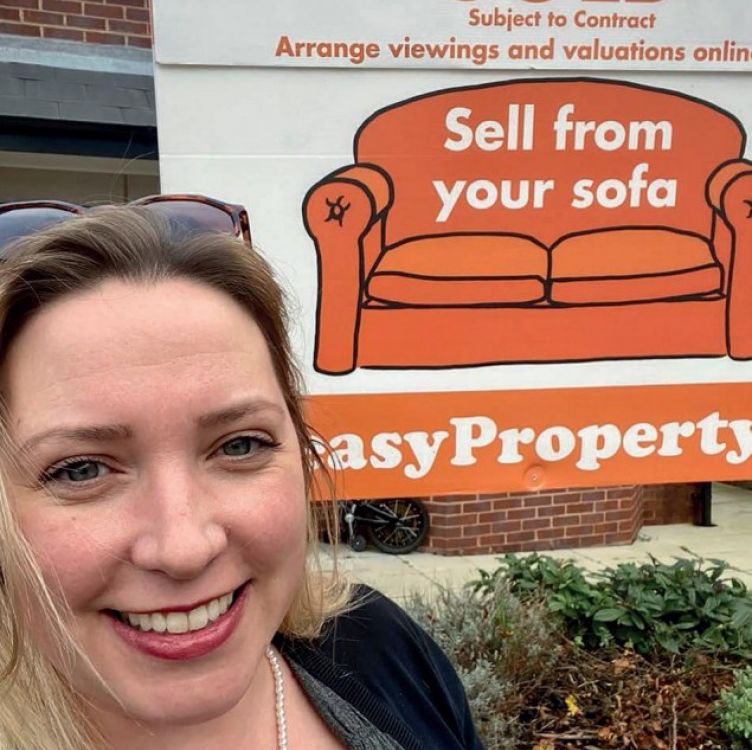 Despite a series of setbacks in her life, Laura Dytham’s inspiration for getting back into the workplace as an easyProperty franchisee can be found close to home

Laura Dytham is one of a growing number of women who’ve become their own boss in recent years. What makes her stand out is her remarkable story. It’s an extraordinary one by anyone’s standards.

Not only did Laura decide to become an easyProperty franchisee just before the first lockdown was imposed on the UK public in March 2020, she’s survived a violent and abusive marriage, recovered from thyroid cancer and had a hysterectomy operation cancelled no less than five times because of the pandemic.

Laura also runs her hugely successful business in her hometown of Sandbach, Crewe and the surrounding area of Cheshire while looking after her four young children.

Laura used to work as an estate agent and spent time at a law firm helping solicitors with conveyancing before she started her family. At that point she took a career break. It was during this time she first came across easyProperty.

Part of easyGroup, which was founded by Sir Stelios Haji-Ioannou of easyJet fame, the business is an online estate agency. Its low overheads compared to traditional high street estate agents means franchisees “can offer a more competitive, cost effective service”, according to easyProperty.

Seeking to transform the way people sell their properties by using cutting edge technology and utilising the skills of a network of home-based franchisees, easyProperty is planning significant growth in the next 12 months.

Why not set up on my own?

Of her decision to re-enter the workplace, Laura explains: “I wanted to get back into something to show my kids you can be a mum and still have a career.

“So I looked to find a position within an established estate agency branch, but nobody was taking on staff and the wages on offer were awful. So I thought: why not set up on my own?

“After I saw an advert for easyProperty, I got in touch with the company and, following several conversations, decided to invest and become one of their franchisees.

“However, the month I signed up I got the date for my hysterectomy operation and then the first lockdown happened as well.”

Nevertheless, along with two other people who were also starting out as easyProperty franchisees, Laura started her initial training.

“Every day we would spend time on things like how to take photographs of properties for sale,” she says. “We also had access to property experts, who gave us tips on running a successful property business, plus we had social media training.

“I was trying to juggle being part of the training groups and home schooling four children at the same time, which at times wasn’t fun. At one point I thought I was close to having a nervous breakdown, but I think a lot of people were feeling the same way at that time.”

Hands-on role in the business

Now well established, Laura’s role as an easyProperty franchisee is to market properties in her local area. As part of its marketing commitment to its franchisees, easyProperty also posts properties on online estate agency portals like Rightmove and Zoopla and erect the ‘For Sale’ boards.

“I do pretty much everything else,”

Laura says. “I take the photos and produce the floor plans, but the good thing about easyProperty is that they provide you with all the software. So, for example, once I’ve done a floorplan It will immediately be available on the easyProperty portal.”

She also makes full use of social media. “A lot of estate agents don’t use social media and I think they’re missing a trick because I get so many people interested in viewing properties through my social media,” Laura says.

“Lots of people contact me saying they’ve been following me and they love the videos I post.”

We’re like a big family As part of the easyProperty franchise network, support is also readily available when Laura needs it – whether from the franchisor or fellow franchisees.

“We’re like a big family,” she says. “All the franchisees keep in touch with each other online and help out if there’s something I’m not sure about.

“That’s a big benefit compared to going into business on my own. Without being a franchisee, I just wouldn’t have that kind of support network available to me – it’s been invaluable.”

Like many women running their own business, Laura has to juggle a busy work schedule with an equally active family life. But her upfront approach to this conundrum has turned what could possibly be seen as a negative into a considerable positive.

“When I’m valuing properties, I tell my vendors that I have to do the school run every day, but I’m available for them in the evening or at weekends, so if they need to contact me they don’t have to wait until the following day to speak to me,” she says.

“If I get a phone call when I’m doing the school run, I can phone the person back and because of the lockdowns so many people have had to work from home while looking after children that it’s acceptable now.”

She managed to sell all three

During her time as an easyProperty franchisee Laura’s sold a total of 35 properties, with a further 19 sold subject to contract. The most valuable properties she’s had on her books were three houses that went for £475,000 each.

“They were on a little estate and the person who built them was struggling to sell them,” Laura says.

“He’d been with two other estate agents, so I asked if I could help him and managed to sell all three. Needless to say, he was very pleased with me!”

Expansion on the agenda

With a growing reputation as a flexible, forward thinking estate agency owner and a buoyant property market, Laura is aiming to grow her business beyond her original trading territory this year.

“The property market has been blessed because lots of people have decided that it’s time for a change,” she says.

“They’ve either been stuck in the city in a flat or had to spend time apart from family and the housing market was able to open up after the first lockdown and it’s stayed open since then, so thanks to the stamp duty holiday the whole industry has been very busy.”

As for expanding the reach of her franchise, Laura adds: “People keep requesting for me to go further afield as my reputation has grown.

“They have been recommending me via word of mouth, so I’m looking to expand the territory that I currently have to cover more areas. I’ll also be taking on my first member of staff soon, so that’s exciting.

“I want to build my business slowly because I don’t want it to become too big too soon. I’m a great believer in testing things to see if they work first.”

With her positive outlook – in spite of everything she’s been through in her life – and her tenacity as a business woman, you won’t find many people backing against Laura achieving her ambitions.