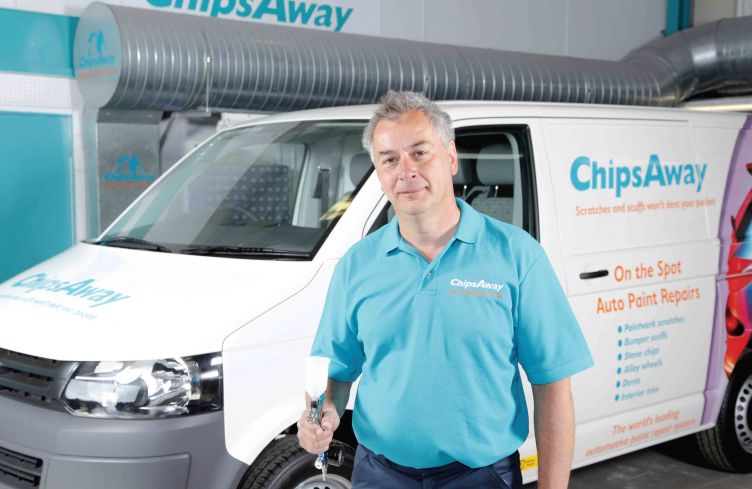 Since joining ChipsAway just under a year ago, redundancy victim Kieron Williams has built a well established business from which he is beginning to reap financial rewards

After being made redundant for the third time in two years, Kieron Williams decided to take control of his career and become self-employed - and it was ChipsAway that struck all the right notes.

“Ironically, I had seen a ChipsAway demonstration video about 10 years ago and had been very impressed by the system, but at the time I took what I thought was the sensible decision and got a job,” he explains. “However, once I was made redundant for the third time, with a partner and an 11-year-old daughter to support, I decided it was time to take destiny in to my own hands.”

Having always had a keen interest in cars, Kieron began his career working as an apprentice engineer for car brands such as Rolls-Royce and Ferrari, and later as a workshop controller for a Jaguar dealership.

He admits: “Despite coming from a family of musicians, cars have always been my passion. It’s such a privilege for me to help restore cars to their former glory. Although I work longer hours than previously, I definitely reap the rewards too.”

It wasn’t just Kieron’s love of cars that attracted him to ChipsAway. After first discovering the opportunity at The British & International Franchise Exhibition at Olympia, the professionalism of the company and the results shone through. He then attended an open day in March and was sold.

Says Kieron: “Everybody I spoke to really seemed to know what they were talking about - the model was tried and tested, so we already knew that it worked. The level of support given through training and my launch was invaluable and I Ieft training with my first month’s work booked in, a great start.”

Since joining ChipsAway just under a year ago, Kieron has built a well established business from which he is beginning to reap financial rewards. He has had considerable success from running a series of supermarket promotions, the last of which he managed to secure £5,000 worth of business. All in all, his business is going from strength to strength - the only way is up.

“The best thing about investing in a ChipsAway franchise is the ongoing support that you receive,” says Kieron. “It’s also brilliant as it is tailored to your needs and stages of development; you never get told what to do, but instead receive honest, straightforward advice on how to grow your business.”

Now qualified to assess lease cars for ‘fair wear and tear’ damage, the next step for Kieron is forming strategic partnerships with fleet hire businesses and corporate clients. He is also just beginning to reap the benefits of the relationships he has built with customers during his first year - seeing lots of repeat business and recommendations.

Kieron reflects: “I have always been taught to take things slowly, concentrating on getting the technique right before building up speed. ChipsAway is no different. I want to make sure that I offer high quality repairs so customers will rebook and recommend my services to their friends.

“My only regret is that I didn’t start a ChipsAway franchise years ago. This would have saved me having a string of mundane jobs and who knows where my ChipsAway business might be now.”

ChipsAway is the UK’s leading specialist in minor automotive paintwork repairs, with around 350 specialists in successful operation around the UK and a network of master franchisors worldwide. Franchisees operate from liveried vehicles customised into fully equipped mobile workshops and CarCare Centres (fixed base units). They provide convenient, high quality paintwork repairs within a matter of hours and at a fraction of the cost of traditional body shop methods.

With over 34 million vehicles on the road and up to 17 million minor damage repair opportunities every year, ChipsAway estimates that currently it serves only three per cent of its potential marketplace. The quality, value and convenience of ChipsAway ‘on the spot’ repairs ensure the company remains the dominant brand in this lucrative and rapidly growing marketplace, with franchisees having the opportunity to expand rapidly into a major management franchise with multiple vehicles, territories and CarCare Centres.