“How Becoming A Snap-on Franchisee Changed My Life” 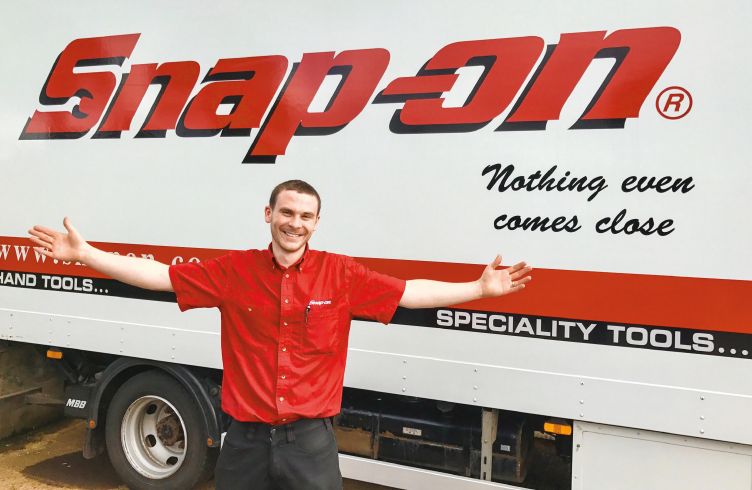 With a growing empire under his belt, family man Alex Hunter says he’s proud to be part of the Snap-on network

Alex Hunter, 28, has been running his Snap-on franchise in County Antrim, Northern Ireland since April 2013. In his first four years he’s expanded into a second territory, is running multiple vans and has even employed his dad.

With a growing empire under his belt, family man Alex says he’s proud to be part of the Snap-on network. He even looks forward to Monday mornings.

Alex explains: “The best thing about being a Snap-on franchisee is the freedom I can afford to give myself. I work hard Monday to Friday, but once those weekends roll around that’s time set aside for my wife and son.

“So many guys, like me, trained in a hands-on role at college and have ended up working evenings and weekends just to pay the bills. With Snap-on, I can pick and choose my own hours.”

A 9-5 desk job was never part of the plan for Alex. Keen on the outdoors for as long as he can remember, he left school at 16 and went straight to agricultural college. He studied to become a land-based service engineer, working with plant and farm machinery.

Unfortunately, full-time work in this field wasn’t widely available, so Alex began working in a motorbike shop. All in all, he spent six years there, but living hand to mouth on his monthly income saw him questioning his motives and dreaming of more.

“I’d always wanted to be my own boss and be in control of my own earnings, so I considered opening my own motorbike shop,” Alex says. “But with my lack of experience and the weather in Ireland, I didn’t think it was viable.

“My local Snap-on franchisee had been coming to the shop for years and I’d often chatted to him about what he did. One particular day I started to question him in more detail about the franchise and it just clicked for me.

I enrolled myself in the recruitment process that same day.

“There was so much to find out, but Snap-on help walk you through it and after going on van rides and chatting to other franchisees and some of the team at head office, I was convinced this was for me.

“A few weeks later I applied for finance with Snap-on and soon after that I was enrolled on training.”

Snap-on is one of the only franchisors in the UK able to help franchisees fund the purchase of the business.

The company does this through its in-house bank, Snap-on Finance. This fully regulated finance house eliminates the need for the high street banks. And after all, who better to invest in your franchise with you than your franchisor?

Training starts with a trip to Snapon’s UK head office in Kettering. New franchisees meet the staff who will support them on a daily basis and collect their own custom built mobile store as they’re welcomed into the Snap-on family.

Afterwards, new recruits jet off for a week of classroom-style training in Dallas, USA. Once back home, training continues with a full week of on-van support out in the field. New franchisees are paired with a dedicated franchise developer for the first 12 months, who spends another 12 days on the road offering one-to-one support within the first five weeks.

“The training was great, but it was very intense,” Alex says. “I had been so sure in my decision to join Snap-on, but at first the training made me question whether I could do it.

“I worked hard to take everything on board, but you’re given so much information that I kept panicking I’d never remember it all. Incredibly, when I came back to the UK and started putting everything I’d learnt into practice, it all came flooding back.”

Before long, Alex had put his new skills to good use and built up a faithful customer base. In fact, he did so well that he quickly paid back the £20,000 loan he had taken out to start his franchise, giving him the financial freedom to buy into another territory in 2015.

“As soon as I had paid off my original loan, I went straight back to Snap-on Finance for another one to expand the business,” Alex says. “I then employed my dad as an assistant to work for me on the second van for around a year - that was an interesting flip in the father/son relationship.

“You have to be a people person to work with Snap-on, something that suits me down to the ground, as I really enjoy chatting with my customers every day.

“To be successful with Snap-on, you need to be prepared to work hard. Building friendships with my regulars is a great benefit to my own sense of enjoyment and satisfaction, but there’s a lot of hard work going on behind closed doors to keep the money coming in.”

Snap-on is the world’s number one professional tool brand. It’s the leading global manufacturer and distributor of tools for the professional technician.

Franchisees deliver gold standard, premium products to technicians up and down the country. The business opportunity offers you the chance to be your own boss, while being supported by an elite team of industry specialists.

Alex has had one or two personal hurdles to overcome but now, with a small Snap-on empire of his own and more plans for expansion on the horizon, he’s proud of the future he’s built for his wife and young son.

“I’ve ordered a new van, which will be here in October - I can’t wait for it to arrive,” Alex says. “I’m actually blind in one eye, so I’ve hired another new assistant to drive the van and help take some of the day-to-day tasks off me.

“I’m looking forward to seeing how his role will allow me to focus on developing the business further. I’ve done well for myself and set up a business that will continue to provide a comfortable income for as long as I want it to.

“I sometimes forget how much I’ve achieved in just a few years. Setting my own targets and meeting them is satisfying and rewarding in many ways.

“I love my work, look forward to Monday morning and can prioritise my family to make sure nothing gets in the way of our time together. How many people can say that?”