“Drain Doctor makes sense to me; it is a service-based business which is recession-proof as plumbers and drainage engineers will always be in need” 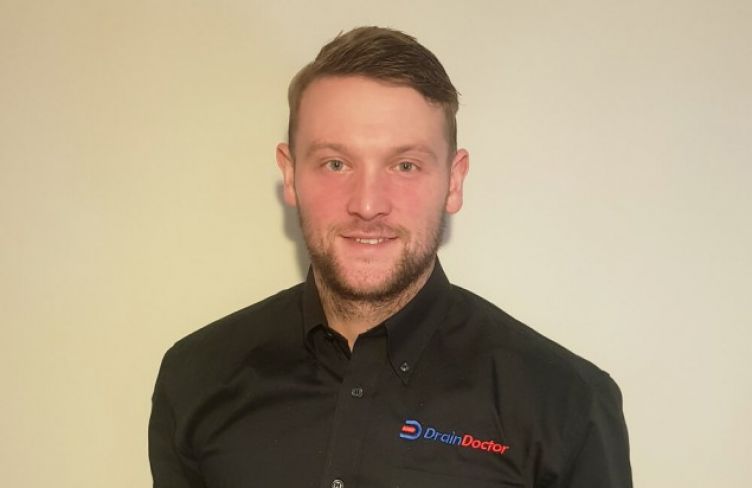 Ben Binns joined Drain Doctor in January 2020 having seen the recession proof nature of the business. Little did he know that foresight would come in handy when COVID-19 arrived in March!

After a successful career in the insurance industry-leading, award-winning teams Benjamin Binns wanted something more from his day-to-day. When you meet Ben, you understand why that would be the case, his enthusiasm and glass half full attitude is infectious.

Ben started his Drain Doctor business in January 2020 in his home town of Bradford. “I come from a hard-working background growing up in Bradford I am born and bred Bradfordian,” he said. “Starting my own business has always been the goal for me. I have tried and failed at other ‘attempts’ at business and entrepreneurship but I guess that is what makes a good entrepreneur right?”

Upon reviewing available opportunities in his area, Drain Doctor became a standout choice for Ben. With the security and recession-resistant nature of the business model proving most appealing.

He explained: “I don’t know what it was, whether it was good business sense or whether I was being looked over by someone but I still have my business plan that was written in October 2019 and one of the sections regarding why I wanted to take on Drain Doctor was written with ‘Drain Doctor makes sense to me; it is a service-based business which is recession-proof as plumbers and drainage engineers will always be in need’.

“When January came around and my franchise agreement was signed I would never in my wildest dreams have thought I had just officially begun launching a new business at the beginning of the world’s biggest ever pandemic subsequent recession.”

Although Drain Doctor’s essential services continued to be in demand throughout the lockdown period and beyond, it presented some obvious challenges for Ben. “As April unfolded and training sessions for my new team were cancelled all the barriers between me and success were being erected but as all determined and passionate people tend to do, those barriers were smashed down. During our first month of trading, we have had a calendar full of customer appointments and finished with a very strong profit,” he said.

Since then, he hasn’t looked back with that trend (of full customer appointments) continuing throughout the year and his business steadily progressing. When asked what he enjoyed most about running his Drain Doctor business his proactive attitude again shone through: “After 10-plus years of uncertainty, selling my time to someone else’s dream and miserable train journeys to my office, I enjoy having my time back to focus on really developing the quality of my family’s life. I am able to spend more time with my family especially my ageing 11-year-old Labrador who now has the comfort of dinner time walks and a never-ending supply of biscuits! Time is our biggest asset – once it’s gone it isn’t coming back – so spend it wisely and spend it on things you love.

“Everything I do is for me and the buck stops with me – if I don’t do it, it doesn’t get done and I absolutely love that pressure.”

Ben also praised the support of the Drain Doctor franchise business consultants (FBCs) and his fellow franchisees. “The three FBCs are huge to the organisation – between the three of them, anything they don’t know isn’t worth knowing! I have also learned a lot from the wider group. I have leant on Mike Baddeley (Birmingham), Rob Simpson (Anglia) and Kevin (North West) a number of times for both support and ideas! Again – with a circle of influence so successful as these three guys why wouldn’t you speak to them?” he advised.

Although Ben’s Drain Doctor journey has only just begun, he credited his experience to his own personal growth throughout this most interesting of years. He said: “It has enabled me to grow and develop as a person in ways I thought not possible prior to becoming part of the network. I have learnt that no matter what situation I am placed in I have an irrevocable way of turning it around in my favour. I have a massive passion for customer satisfaction and all of our 5-star reviews on all our platforms shine through on this.”

Looking back on his beginning as a franchise owner, Ben had the following advice for those looking to take control of their own business, highlighting the benefits of joining a franchise organisation: “If you want to get into business but are unsure of where to start, why not begin under the guidance of some of the UK’s biggest businesses and benefit from the wider franchise community? The ideas and circle of influence is huge.”

Finally, Ben has some lofty ambitions for the future but nothing that can’t be achieved with his attitude and determination. He outlined: “My biggest goal is getting new premises and expanding our operation. Even though we are still babies in our journey, why wait around? If I can do what I have done in a year-long pandemic, then what can’t I do?”

And on a personal note, he hoped: “My wife and I have also been trying to start a family since we got married in 2017 so hopefully 2020 can end on some good news with Baby Binns expected in 2021!”