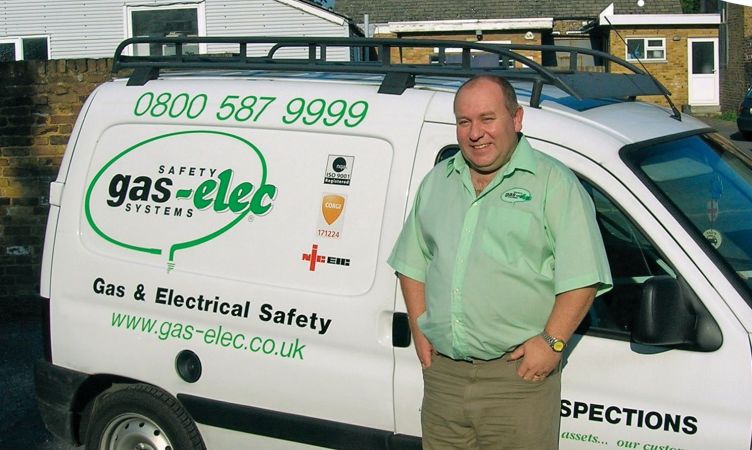 With 90 per cent of its franchises profitable, there has never been a better time to join gas-elec

If you want to know what it’s like to work with the UK’s leading gas and electrical inspection franchise, talk to Dennis Healey. He started at gas-elec shortly after the company was born in 1996 - and is about to sit the industry’s five-yearly gas exams so that he can remain a franchisee until at least 2017.

A former electrician with Southern Electric, Dennis joined gas-elec, which pioneered the concept of a single engineer carrying out both gas and electrical inspections in one visit, because he liked the idea of being selfemployed without having to find the actual work. So much so, in fact, that he actually helped with the initial pilot of the franchise - this Berkshire-based franchisee has been with gas-elec every step of its highly successful way.

Or you could talk to former navy chief Jason Davey. He came across gas-elec at a franchise exhibition in London and, reasoning that more than two decades of radio communications for the forces would translate well into gas engineering, in 2003 he opened up his own franchise in Bath. Nine years on, Jason more than matches the £35,000 salary he was making with the navy.

Or how about the company’s newest franchisee, Chris Poole? The 27-year-old worked as a gas fitter for a small subcontractor for four years, but last year the company failed to secure a crucial contract and had to close its doors. Keen to try his hand at self-employment and use his gas qualifications, Chris got in touch with gas-elec. He recently completed his eight-day training period at the company’s head office in Heathrow and has now returned home to the West Midlands and a new working life.

He certainly has his work cut out. It is no understatement to say that there has never been a better time to join gas-elec. First, because a staggering 90 per cent of franchises are profitable. And if this statistic is not impressive enough, you should consider that after 10 years a mere four per cent of nonfranchise businesses are still trading.

Second, even among franchisors gas-elec is a particularly safe bet. Private residential lettings, the company’s core market, is growing at a phenomenal rate - already constituting 3.4 million households (16 per cent of the total), it is estimated that the growing private rental sector will account for one in five British households by 2015. And if council tenants are included, half of all householders in Britain could be living in rented accommodation within 15 years.

The reason? In the words of the government’s recent Housing Strategy report: ‘Median house prices are now seven times median earnings, compared with three and a half times in the mid-1990s. Home ownership is increasingly restricted to those who receive assistance from family or friends. The proportion of first-time buyers aged under 30 requiring financial assistance rose from 36 per cent in 2005 to 77 per cent in 2010.’

It is bad news for the legions of would-be homeowners locked out of the mortgage market, but very good news for would-be gas-elec franchisees.

Why? Because some 10 million rented properties across Britain are going to require annual gas and electrical safety inspections. Put another way, landlords are responsible for their tenants’ gas and electrical safety. A landlord who has been negligent in health and safety by, for example, failing to obtain a gas safety certificate can face fines of thousands of pounds. And a serious gas or electrical accident can put him or her behind bars.

Add in other factors, such as the increasing numbers of householders who are asking for safety inspections before they sell their homes and the UK’s ever growing safety conscious gas and electrical legislation, and gas-elec’s current annual workload of 120,000 jobs is set to grow very fast indeed.

However, when Dave Turner opened a gas-elec franchise three and a half years ago not all of these growing trends were predictable. He joined after 16 years on the factory floor and his primary motive for doing so was so he could spend more time with his family.

“I used to do eight to 12-hour morning, afternoon and night shifts, and I worked three out of five weekends,” says Dave. “Now I am generally finished by mid-afternoon and it is rare for me to work a Saturday morning. I have much more time with my family.”

He is also making considerably more money than he did as a semiskilled factory technician: “Last year my gross income was in the region of £80,000. I am able to properly support my older child who is now at university and I am finally earning my money in a way that is genuinely enjoyable.”

One of people’s biggest fears about striking out on their own is the mountain of administration that comes with self-employment. Knowing this, the company devised a bespoke bureau facility that generates invoices, sets credit limits for account holding customers and calculates VAT. And most important for franchisees, the system means upon receipt of customers’ payments money is paid into their bank accounts twice a month for completed jobs.

“We came up with the idea eight years ago after we realised the amount of time our regional offices were spending on admin was leading to a direct fall in sales,” explains gas-elec managing director John Davidson. “On average, GBS saves our engineers around 17 hours a month in bookkeeping. That is proper support for our franchisees.”

gas-elec support comes in other forms too. The company has a unique two-tier franchise system whereby one tier the regional management franchisees look after sales and marketing and their office staff see to the booking and coordination of work for the engineers, and the other the safety inspection engineers carry out the safety inspections and remedial repairs. The two tiers are mutually reliant and, therefore, mutually supportive. It might be unique in the world of franchising, but it works. The proof? Since gas-elec’s inception in 1996, it has enjoyed year on year growth and provided services to more than 1,000,000 customers across the UK.

In addition, the company’s offices at Heathrow and Sunningdale employ 21 full-time support staff, including franchise director Carol Otway, whose many roles include assisting new recruits coming into the business, helping them source funding and generally supporting them in making the big step from training to starting their own business.

It is no exaggeration to say she has a good working relationship with every one of gas-elec’s franchisees, who appreciate things such as the fact her phone is always on and that she responds to emails promptly and at all hours.

In the words of David McVicker, who joined gas-elec 14 years ago: “Carol is there when I need her - unlike most selfemployed people, I am not entirely on my own. For me, it is the perfect blend between independence and dependence.”

Before becoming a franchisee, David was a production engineer at ICI where, after 25 years’ service, he was given the ‘choice’ of redundancy or redeployment at a lower level. “Now I just can’t imagine not working for myself,” says David. “In addition to the autonomy and pride of running my own business, being a franchisee makes me feel very secure in my business. Certainly more secure than I felt working for a big company.”