Pitching up with the Camping and Caravanning Club franchise 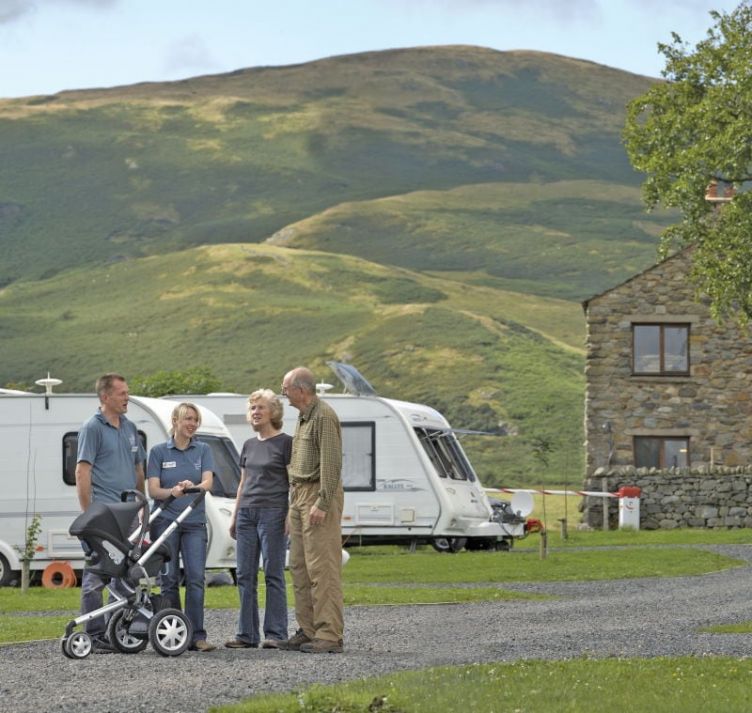 When Nicky Sellier and David Weller decided they wanted to change direction, they chose to buy a campsite and took a quantum leap in moving from the urban South East of England to the other end of the UK and the glorious open spaces of Skye.

David says: “I had been restless and needed a new challenge, having been a director of our family plumbing and heating business for many years. It was started by my great-grandfather in 1895 and had grown and diversified, so we were selling all sorts of DIY, building, hardware and garden items, as well as tents and other outdoor equipment.

“I worked very long hours and weekends and so saw very little of Nicky, who then had a job caring for children, latterly those with disabilities. We both felt under pressure. Losing close family members made me realise you’ve got to do things while you can, seize the moment and take the opportunity – I believe you’re only here once and I didn’t want to get to retirement and regret not doing what I really wanted to.”

While they were mulling things over, Nicky and David took a camping holiday in Scotland, a country David had visited many times before and knew well. Keen outdoor people, the couple love nothing better than camping and walking and being outside on mountains or in wild countryside. On Skye they looked at small hotels, B&Bs and other properties that had the potential to be both a home and business base. Driving around the island, they stopped one day to admire a stunning view and instantly fell in love with what they saw – a campsite on a 200 acre croft with three-quarters of a mile of loch frontage.

“We both wanted this place as soon as we saw it,” Nicky says. “You’ve got to want to live on-site, as well as work on it.”

Convinced this was the way forward, they approached the owner about the possibility of buying. They were surprised - and delighted - when he replied, ironically, with: “How did you know we wanted to sell?”

It took six months for the sale to go through. Nicky and David became proud owners of the site in December 2007 and planned to apply to become part of The Camping and Caravanning Club‘s franchise network as soon as possible.

As a Club member for many years, David knew about the franchise opportunity with its training and support. He understood the benefits it offered, particularly national marketing, a centralised bookings service and enhanced brand recognition.

Nicky and David turned their attention to making improvements on the site so that it would conform to standards required by the Club. David explains: “Club members are familiar with the Club’s ethos and expect their campsites to be better managed, in better locations, to be cleaner and have better facilities than the competition. Also, Club members tend to go camping more often and stay longer than a casual visitor. The Club has a clear set of policies, which members know and respect.

“Being part of this franchise has many advantages. The most important is the Club’s marketing expertise, with the opportunity to be listed in its nationwide directory of campsites and to have a presence on the web. Being part of a professionally-run and well respected organisation that has an instantly recognisable brand achieves much better results than an individual trying to do it alone.”

Nicky adds: “Because someone assists us with publicity and taking bookings, we can use our skills more effectively and focus on the aspect we love best - looking after our visitors, who come from all over the world to enjoy our magnificent scenery diversity of wildlife and fascinating local history. They all have one thing in common - they thoroughly enjoy being here.

“Visitors, particularly children, love our growing menagerie - we inherited some of the animals and have acquired others, so now we have Highland cattle, sheep, hens and ducks. There’s never a dull moment. We plan to expand and hope to have a proper rare breeds farm before too long.”

Nicky has a natural affinity for children and young people, while David’s 26 years’ retail experience has been invaluable in looking after visitors and ensuring that they get what they want. It also enables him to run the campsite’s licensed shop with expert ease and efficiency.

“It has been great finding our niche,” they agreed. “We love the place and what we are doing. We spend all our time together now, but we have never been happier. We are delighted with our bookings for this year and are really looking forward to the future. Long-term, we would like ours to be the best campsite in Scotland.”

Ashbourne, Corfe Castle and Charmouth Camping and Caravanning Club sites were awarded gold levels of excellence after they demonstrated the exceptional lengths they have gone to, to protect and enhance the natural environment.

Start your own Camping and Caravanning Club (The) franchise

Send a free enquiry to Camping and Caravanning Club (The) for further information!