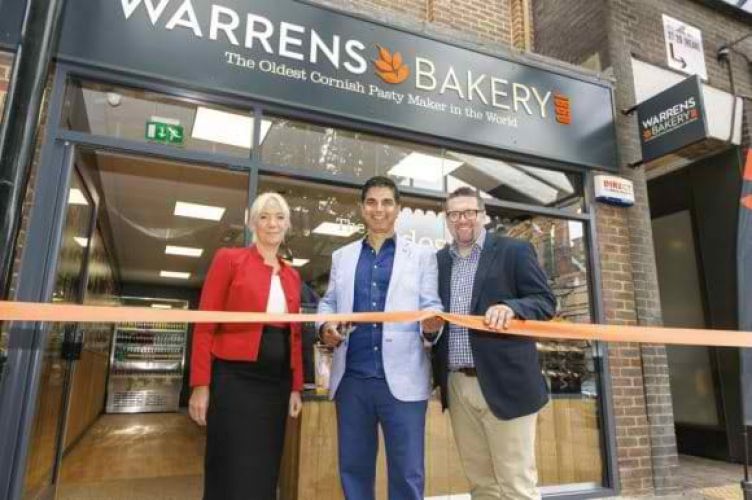 Warrens Bakery, one of the UK’s leading craft bakeries and the world’s oldest pasty maker, has reinforced its plans for national expansion by announcing it’s joined forces with the British Franchise Association.

Following the success of the company’s first two stores to open outside of the south west this year, it’s teamed up with the UK’s leading authority in franchising ahead of rolling out further stores around the country.

Established in 1860 and the oldest bakery in Cornwall, the demand from franchise partners is continuing to rise, with well over 100 stores now in the pipeline. The Warrens Bakery team are working to keep up with the demand for new franchise stores, with interest from potential franchise owners growing by the day.

With successful store openings in both Birmingham and Hampshire, the franchise partnerships in each area are proving a winning formula for the artisan British bakery brand. The association with bfa is another step that will help build similar links with other regional networks.

Formed in 1977, the bfa is the franchise industry’s main accreditation body, formed to act in the interests of the industry as a whole. Warrens Bakery had to be tested against the organisation’s strict and extensive criteria and will now be officially represented as an official member.

Mark Sullivan, chairman of Warrens Bakery, says: “After a hugely successful few months since the opening of our Midlands store, we’re thrilled with the first stage in our franchise development.

“We’re keen to ensure that plans progress as we intend them to, so the decision to become a member of the bfa made complete sense, especially with such a quick succession of franchise openings planned across the country.

“The extra layer of support and guidance from the bfa will provide a consistent steer as we move rapidly into franchising, with a new store pipeline of over 200 new stores in the next five years and 20 more signed to open this year.

“It’s a truly exciting time for the Warrens Bakery brand and we look forward to being able to share our award winning products and diverse range of sweet and savoury bakes with even more hungry customers.

Commenting following the recent opening in Eastleigh at the end of May, franchise owner Farhat Abbas said: “I’m thrilled to be working alongside the Warrens Bakery team to be able to provide Hampshire residents with something new, yet traditional, on the high street.

“The level of support and attention given - teamed with the expert eye of the Warrens Bakery team - has delivered an exceptional start to the new store.

“This has received an overwhelmingly positive reaction from locals in Eastleigh and I’m looking forward to the next set of openings, which are planned before the end of the year.”