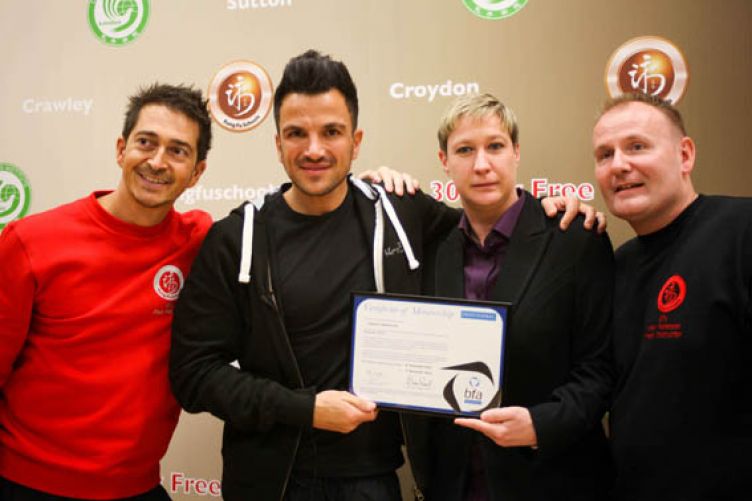 The musician, celebrity and martial arts enthusiast (pictured) officially opened the franchise on November 15 in Croydon.

The opening was attended by national and local media and local dignitaries, including the mayors of Crawley and Croydon and MPs for Croydon and Sutton, plus the first secretary of the Education Section from the Embassy of the People’s Republic of China and the Chinese director from the London Confucius Institute.

Guests were treated to a display of kung fu training, in which Peter took part, as well as a traditional Chinese Lion dance and folk dancing performed by the London Confucius Institute.

Children from the junior beginner and Little Dragon Advance classes also showed off their skills in an exciting live demonstration.

“Obtaining bfa accreditation was the icing on the cake and the perfect end to the day,” Paul Hawkes says.

“We were delighted that Peter could take time out of his busy schedule to officially launch the franchise.

“It was also great to see so many local politicians and dignitaries support our event.

“We now look forward to growing the business and welcoming on board our first franchisees.”

FRANCHISES FOR SALE
Suzie McCafferty, managing director of franchise consultancy Platinum Wave, which is advising the company, says: “Kung Fu Schools is offering fantastic franchise opportunities, which I am confident will be very successful.

“They have done their research, proven the business model works and put together an excellent infrastructure to support franchise owners in their journey.”