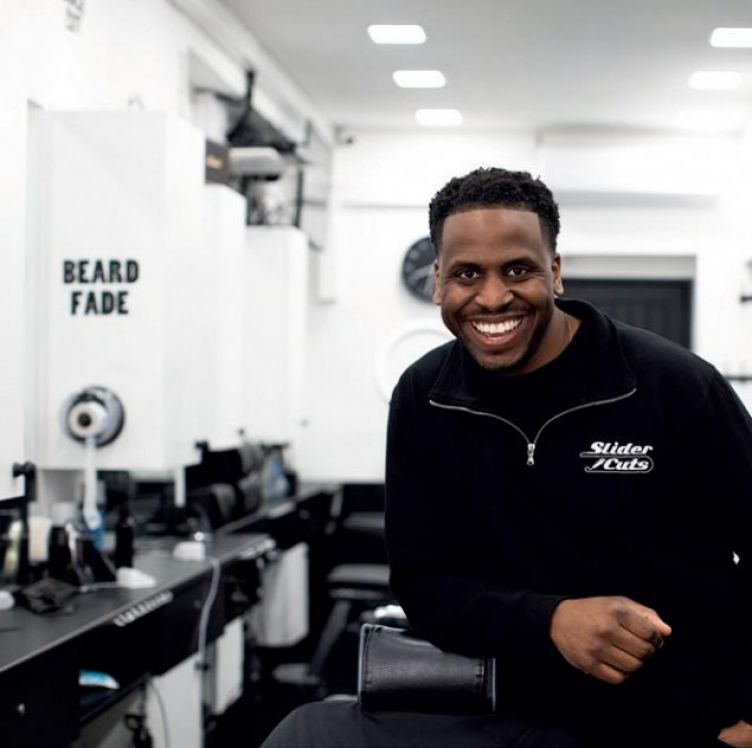 Barber to stars of TV, sport and music, SliderCuts - aka Mark Maciver - honed his razor-sharp skills at an early age. His acumen and knowledge has also made him a trusted figure in the wider business community

Today, he imparts his business knowledge in person, in print and online.

Tell us about yourself. How did you get into barbering?

I got into barbering when I was 13-15 years old. I was getting my haircut at home from my older brothers and mum and was tired of getting - no offence - substandard haircuts, so I decided to pick up the clippers myself.

That was how I got into barbering, but I was always interested in hair. I used to look at people’s haircuts on the street or on TV and say, when I get older and finally go to the barbershop I’ll get that haircut or that hairstyle.

When I was 18, I got an unofficial apprenticeship/internship at a barbershop while I was in college. I then worked hard to build my own business - SliderCuts - and the rest is history.

How has COVID affected your business?

I haven’t been able to work, as we’ve been shut for about seven to eight months of the last 12.

It’s affected the business significantly, but I’m working my way through it. During lockdown, I was working on other things.

I’ve been running online business classes, where people have paid to learn various barbering skills. I’ve also been increasing my social media presence and investing in other areas.

How does it feel to have SliderCuts open again?

You sometimes forget how good it feels to connect with people, so it’s amazing.

It feels like this has been missing, this whole community, this whole connection, because of the period of time we’ve been closed.

There’s a great buzz, there’s a great vibe in the air and it feels amazing to have business flowing again and to be making money, so every month I’m not in a position to have to find money to pay bills.

Seeing the other staff members here as well and them in a position to make money is really good also.

So it’s great to have the studios back open because this is a community centre and the community needs it, it feeds people’s families and everybody loves a barbershop because you leave here looking better than when you walked in.

You’ve been described as a business role model. How are you helping small companies and aspiring entrepreneurs to succeed?

By providing a lot of free information. On my Instagram, for example, I’m always giving out information to help small businesses grow, as well as advice on managing the times we’re in.

Outside of that, I mentor various people, which I don’t charge for, while generally, in real life, I’m always helping people.

I’ve also written a book called Shaping up Culture. It’s a guide to help people approach those initial steps of setting up a business and I’m in the process of writing some new chapters, which will be released soon.

I do vlogs that are available on YouTube that offer business advice. I host online classes as well that focus on subjects such as how to set up a business, how to use Instagram and how to create a brand. While people have to pay for these, I’ve made sure they’re affordable and accessible.

In addition, I believe in leading by example, which is what I do every day running my own company. I’m playing my part to help people grow as much as I can.

Whatever you are in, do it to the best of your ability, which comes from a scripture in the bible - Colossians 3:23: ‘Work willingly at whatever you do, as though you were working for the Lord rather than for people.’

What would you say to someone considering becoming their own boss?

This is a conversation I have quite a lot with people. I believe the best way to share your knowledge is by asking questions because ultimately you cannot say to someone they can or can’t, but you can help them come to their own conclusion

Why do they want to be their own boss? What will make their business different from the competition? Another thing that’s important is whether they are boss material. Do you want to be your own boss simply for the title or do you actually feel like you have a role where you can help and serve people? Ultimately, a good boss is a servant. I’m a servant to my customers. I’m even a servant to my staff in a sense.

I also make sure I share how being your own boss often means you’re going to work harder and longer than when you worked for someone else.

So if you think it’s going to be an easier option, I’m here to tell you that it’s not. It takes a lot of work, time, energy and sacrifice. I’m not trying to put people off, but make them aware of the road ahead. Yes, it could be more fruitful and potentially there are more benefits, but it’s definitely not easier.

What will people learn from Shaping up Culture?

How to approach business in a better way and develop an understanding that business starts with themselves and the development of their character.

They’ll learn the first five steps that don’t get spoken about in most business books because they always make the assumption people already know these things and start from a place a lot of people I know, for example, don’t start from.

The book may also help people to understand why some of their endeavours in life aren’t going the way they hoped, whether that’s due to steps being missed out or areas not being addressed, which Shaping up Culture will help them identify.

Where do you see yourself in five years?

At the SliderCuts Studios and moving into a new house local to the shop. Hopefully, I would have started my SliderCuts Academy and maybe, since I’ve got my beauty studio, I’ll be teaching things like nails and hairdressing as well.

Business wise, opening up SliderCuts Studios and being able to employ staff, which to me means providing people with jobs that help them support themselves.

I’m also proud of being recognised for my work with awards from the industry and nominations like the Evening Standard Business Awards. Away from business, I’m really proud of my marriage and children. To me that’s success. Having a stable, happy family life and being part of my children’s lives has always been one of the things I’ve wanted since I was young.

Greatest piece of advice anyone has ever given you?

I don’t know if it’s the greatest, but it was given at the point I needed to hear it - when I was opening up SliderCuts Studios.

There were so many delays getting it open and someone said to me: “Just get it done. Whatever it is, do it.” It was easier said than done, but it resonated with me and focused my mind.

What advice would you give to your younger self?

The road you are on is probably going to feel lonely, but continue to pursue your dreams, as they will pay off in the end.

Greatest sacrifices you’ve made to get where you are?

Time and money. I sleep very few hours because I’m always supposed to be doing something and need to prioritise to ensure I give time to my children, my home life and my wife, as well as my business. So yes, time is a big sacrifice.

I’ve had to do everything with no money, so I’ve had to make financial sacrifices to pursue my business goals and dreams.