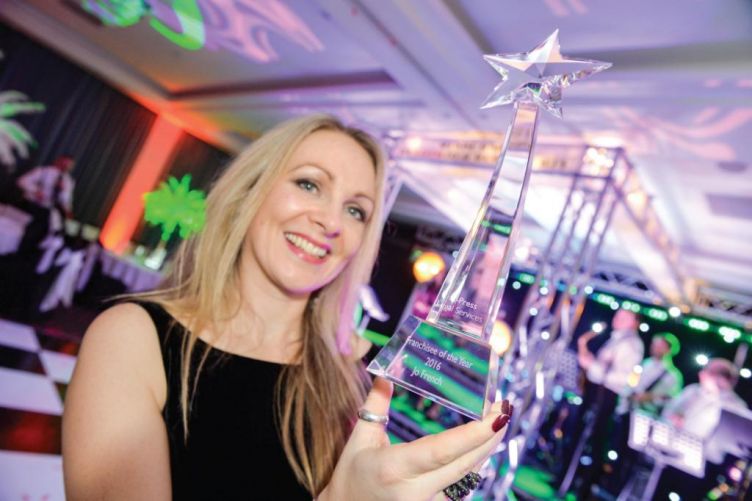 With a dynamic approach to life and business, it’s no surprise Jo French is X-Press Legal Services’ Franchisee of the Year. Trevor Johnson reports

She skis, surfs, bakes, walks her dogs, cycles, works out and sings in a rock band. Surely that’s more than enough to keep most people at full stretch?

Not Jo French. This Essex action woman has no problem coping with all of that - and a full-time career as well.

Current X-Press Legal Services Franchisee of the Year, Jo took on the company’s Essex and Hertfordshire territories five years ago and expanded the business at a phenomenal rate, increasing turnover by up to 100 per cent in a year.

“I’m not where I want to be yet, but I’m making pretty good progress,” is how she modestly puts it. “I’ve got very high targets and high hopes. I certainly don’t make it easy on myself.

“I do have an awful lot going on in my life. I work hard in the business, but I also believe it’s important to take time out to enjoy myself - and singing is something I’ve always loved.”

For the past 15 years Jo has sung in local rock bands, playing gigs in pubs and clubs and at private functions.

“The current band does covers of classics by groups like Led Zeppelin and Guns N’ Roses,” she explains. “We’re pretty loud. We’re called Bombshell, which says it all.”

X-Press Legal Services franchisees provide solicitors and other conveyancing professionals with property searches and reports, which are an essential part of the property buying process.

It was a new world to Jo, who had worked in the financial industry in the City for 17 years, 12 of them in financial product development.

But the new business grew at a spectacular pace, which Jo attributes to hard work, providing high standards of service and customer care and local marketing that’s improved awareness of the brand and brought increasing word of mouth recommendations.

“When a friend began enthusing about an X-Press franchise she and her husband were taking on, I thought it was well worth investigating. It seemed to be a great way to be my own boss, but with less risk.

“The idea of following a tried and tested business model was very appealing, as was having a support network through the franchisor.”

Jo says she considered other franchises, but only X-Press met all her criteria. She also spoke to other X-Press franchisees and, confident she was doing the right thing, Jo produced a business plan and looked forward to a new future.

“One big advantage was that the business could initially be run from home, keeping start-up costs and overheads to a minimum and allowing you to grow at your own pace,” Jo says. “X-Press have provided tremendous support and are always there when you need them.

“The key to successful franchising is to have a good relationship with your franchisor and to follow the system, which in our case is excellent. I never expected the business would grow so quickly. There’s no way this would have happened if I’d started a business on my own.”

Now Jo has a team of three and covers eight council areas in Essex and two in Hertfordshire. She also hopes to take over two more areas and has ambitious plans for the future.

Jo also liked the fact X-Press was not only a young and dynamic company, but it was also family run.

Seeing the need for a more efficient property search service to local solicitors in his home town of Warrington, Cheshire, Christian Lister started the company in 2000 and was soon joined by his parents and other family members.

Now the company employs five members of the Lister family in key roles, headed by managing director Lynne Lister, previously editor of a UK franchise magazine, and husband Dave, who has a financial services background.

Noting the impatience of many conveyancing solicitors with the leisurely and often cursory property searches available at the time, X-Press was set up with the object of providing a quicker, more efficient and wider ranging service.

Traditionally, solicitors needing a search as part of a property conveyancing deal had to approach one of the UK’s 470 local authorities, who for a fee would produce a report containing information on land charges, rights of way and whether anyone was intending to build a full scale replica of the Taj Mahal in the next door garden.

An alternative is what is termed a personal search - when someone visits the council offices, asks to see the relevant files, which are public property, and compiles a report. That’s what X-Press does - and it’s now a leader in its field.

Looking back, Jo - who has also won the franchise’s business development award - believes the skills and experiences gained in her previous career have been an immense help in running her X-Press franchise.

She adds: “Meticulous attention to detail, total accuracy and the ability to get on well with people are all essential requirements in the search industry, where X-Press has gained the reputation of being a well respected and reliable supplier.

“I tell our researchers that a house is usually the most expensive thing anyone will buy and when we do searches attention to every detail is absolutely vital.

Since 2015, in addition to all her other activities, Jo has been running a regular breakfast time networking group for lawyers, conveyancers and others involved in property buying and selling.

“We have discussions and guest speakers,” she says. “It finishes by 9.30am, so everyone can still get in a full day’s work. We are a niche business, so anything that gets our name out further afield is a bonus.”

Has the housing market been affected by Brexit? “Things were definitely quieter after the referendum - the sense of uncertainty was reflected in house buying and selling,” Jo says.

“Since then, transaction numbers have returned to normal or even increased. When estate agents are busy, so are we.”

Says X-Press’ Dave Lister: “Jo is incredibly hard working and determined. She’s also very energetic and enthusiastic with a dynamic approach to business that benefits both the network and her franchise.”

“I love every moment of working in the business,” Jo says. “But I’m still hoping to get some skiing and surfing in this year.”

An X-Press franchise costs around £30,000 and the company stresses franchisees don’t need any experience in the property search or estate agency business.

The three-week comprehensive training and support programme and custom built software system teaches them everything they need to know. In fact, training continues throughout the life of the franchise, with refresher and continual development.

Indeed, franchisees could hardly have come from more varied backgrounds, including bankers, teachers, firemen, a technical writer, a software engineer, a prison officer, a lawyer, a sales director and an optician.