On the move with the Ableworld franchise 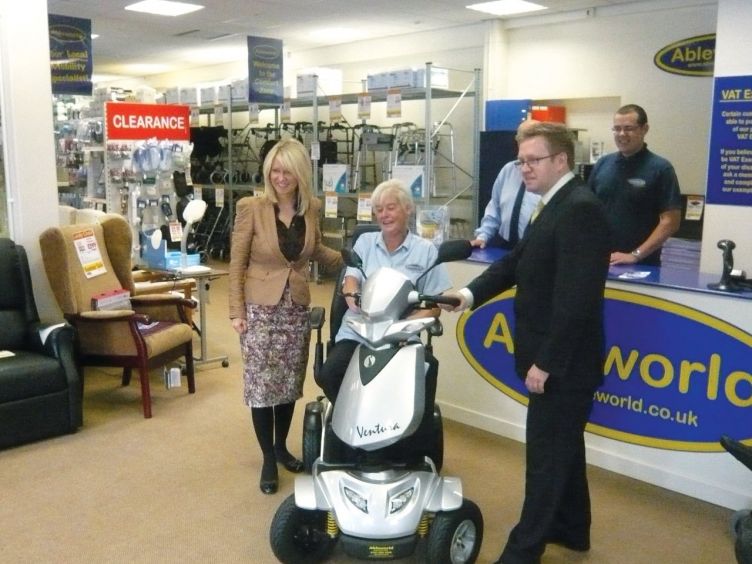 Ableworld has come a long way since its inception in 2001. Now with 19 stores across the UK and plans to open more stores soon in the south, south west and east of the country, the brand has taken on national recognition as a trusted provider of mobility and homecare products.

The mobility retail industry is one of the fastest growing markets in the UK. The statistics are hard hitting. There are currently 14.5 million people aged over 60 in the UK today. Soon 25 per cent of the population will be over the age of 65. The sector is estimated to be worth around £1.5 billion and as public funds dwindle there will be an increasing demand for products such as mobility scooters, stairlifts, adjustable beds, wheelchairs and home aids.

All of Ableworld’s franchisees share one thing in common - they can see the growth potential the mobility sector has to offer. Gerald and Maria Roper opened their Ableworld store last autumn. The couple had previously taught for over 20 years and, like many of us, had always dreamt of running their own business and working for themselves. They have both been “very busy so far” and the couple are feeling confident: “We had a lot of training over the summer and so it’s now a case of putting that into action.”

To put it simply, an Ableworld franchise consists of a retail outlet and a stairlift business. For the retail side, you can think of the job as similar to a specialist retail manager. Building trusted relationships and giving high levels of customer service before, during and after the sale are paramount. This relationship building is something Gerald and Maria take very seriously. Both have a passion for local community involvement - Gerald coaches a local rugby team in his spare time and Maria has been a treasurer for a local charity.

On the stairlift side of the business, franchisees quote, install and repair the equipment. Paul Boniface, Ableworld’s franchise director, says that: “A background in light engineering is an advantage,” however: “full training will be given for anyone interested in the engineering side”. Another option includes employing an engineer if the franchise partner would prefer to concentrate their efforts on sales and management.

As several franchise partners have proved, a partnership of two people pooling their skills and experience works well in this business. However, this does not stop individuals from excelling with Ableworld.

Andy Rees, owner of Ableworld Birkenhead, was crowned Franchisee of the Year 2013 at Ableworld’s Christmas party celebrations. Andy, who had previously served in the Royal Navy, joined the franchise network in 2008. He too saw the potential that exists in the mobility and homecare sector and his business has expanded so much that he now employs a team of four to help run his mobility superstore.

Andy believes that: “Franchising is a great way to start in business because you get the expertise and backing from people who have ‘been there and done that’. They have systems and processes that have worked in the past and which we have proved can work in the future. Of course, it’s hard work, but then so is working for someone else - the difference is you get to create wealth for yourself and your family, rather than someone else.”

It’s been an exciting year for Andy. Last November he expanded his premises and the store was officially opened by Esther McVey, Minister for Disabled People.

Ableworld’s franchise fee is £29,950 and you will need approximately £75,000 in total to set up your franchise. This compares to the usual cost of over six figures to set up a retail outlet.

“When we joined the British Franchise Association in 2010, they told us not to try and make a profit from the initial franchisee and so we have been careful to make sure the initial fee is used to help make sure new franchises have the best possible start,” Paul Boniface says. “We offer a full training package - currently 50 days - an effective launch programme, including several thousand pounds worth of marketing support, and many valuable extras that we feel give franchisees a very good platform for starting their businesses.”

One of the duties of a franchisor is to offer support and guidance to franchisees, especially in the early stages of what might be a new business area for them. As well as a comprehensive training programme, experienced Ableworld trainers are on hand during your opening, as well as the critical first couple of weeks when the store is stocked and open to the public.

Once up and running, franchisees are supported by a head office that’s staffed with experts in finance, marketing, buying, engineering and general retail operations. In addition, a franchise support manager visits franchises every few weeks and continual training is provided on all aspects of the franchise.

So if you’re looking for an industry that offers almost guaranteed growth, great earning potential and tremendous job satisfaction Ableworld could be the franchise for you.