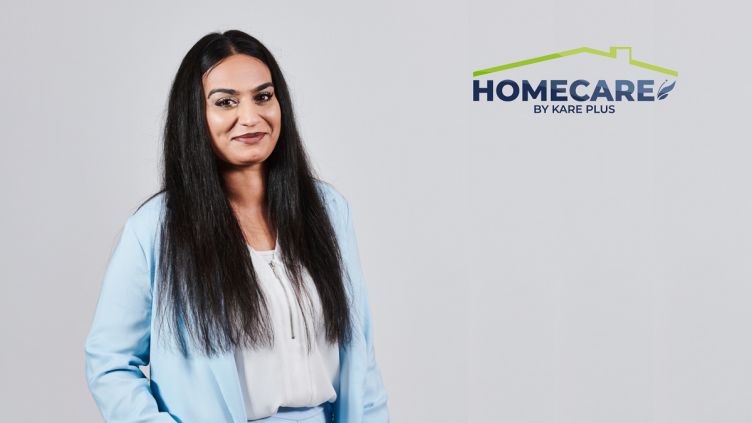 As someone who’s spent her entire life putting other people first, Uzma Syed is a little embarrassed at being one of the most sought-after people in the care sector

For not only was she head-hunted by Homecare by Kare Plus to run its care service in Leeds, but three other care companies were fighting over her and offering to match any offer she received.

The fact she chose Homecare by Kare Plus says as much about the company as it does about her, as Uzma is clearly a woman with plenty of choices. And she exercises those choices carefully.

She could make a lot more money by expanding her business and taking on many more customers, but she prefers to offer care only when she’s completely confident of being able to deliver it to every single customer.

Uzma realised her life would be ruled by her heart rather than her wallet when she was a schoolgirl set on a career in banking.

“I always thought I’d be working in a bank because most of my work experience at school was aimed at that,” she says, “but then I studied Health And Social Care in the Sixth-Form. I did work experience with a supported-living service in Bradford, helping people with learning disabilities, and that changed the course of my life.

“At first, I thought to myself ‘What have I done?’ as I was only 17 and didn’t know much about learning disabilities. But I was having a chat and a laugh with them and helping them get jobs and go out and have a social life, and I enjoyed it so much that I ended up working for that company for five years. I’ve been in the care sector ever since.”

Uzma worked her way up through the industry with spells as a care co-ordinator, a complex care manager and a registered care manager, discovering along the way that her meticulous approach to paperwork as well as the care itself endeared her to employers, clients and, significantly, to the Care Quality Commission, or CQC.

The regulator was particularly impressed that she managed to help two failing care organisations transform themselves from ‘Needing Improvement’ to ‘Good’, an achievement Uzma attributes to paying attention to detail, listening to the needs of clients, and being so thorough with safeguarding and complaint handling.

“I feel passionate about care and the change it can make to individual people’s lives,” she says in a rare break at her Homecare by Kare Plus office in Leeds.

“We don’t do morning call-outs, but one customer called me at 6.00 am because the care firm she used had let her down and she needed help to get out of bed. I could have said no but she would have remained in bed all day, so I got my staff to help her. It’s things like that that make me want to do this job.”

Uzma opened the Leeds office in December and now has 10 carers, plus a constant stream of customers as a result of her contacts with NHS officials and commissioners.

Her current work includes doing end-of-life assessments, meeting customers and their families to discuss their wishes and, if possible, caring for them at home so they don’t have to die in a hospital, a care home or a hospice.

She says: “It’s a privilege to be there for them. I’ve been very picky about my work but it isn’t just about the business when you’re dealing with people’s lives.”

With three other care companies wanting her to work with them, Uzma chose Homecare by Kare Plus because it doesn’t put pressure on her to grow the business constantly, and it offers superb support from the head office.

“The level of support and communications right from the start has been amazing,” says Uzma. “Homecare by Kare Plus actually approached me. I’d never thought of setting up on my own. I had a message via LinkedIn, replied to it, and here I am! I really felt welcome at the head office and never turned back after my first conversation with them.

“I have a Level 5 and so much experience in home care that I could have done everything myself, but I just felt in my heart that I should be Homecare by with Kare Plus.”

Uzma recently featured on BBC Radio Leeds alongside Kare Plus Franchising CEO, Yvonne Tomlinson, also from Yorkshire, to talk about the difference Homecare by Kare Plus services are making to people’s lives within their local communities on a national scale.

This is another example of Homecare by Kare Plus franchise owners benefiting from the support and publicity raised by being part of a leading franchise.