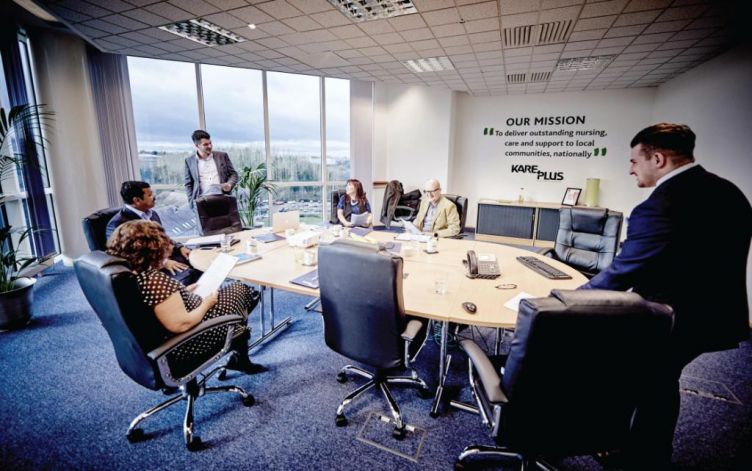 After less than a year as a Kare Plus franchisee, Imran Qureshi is heading to the top of the company’s earning’s league. Trevor Johnson reports

Ask Imran Qureshi for the secret of his spectacular business success and you’ll get an unexpected answer. “I’m not a professional guy in a suit and tie who goes in for all that business jargon,” he says. “I’m just an ordinary person and that’s what works for me,” adding as an afterthought: “I suppose I’m a workaholic too - and a quick learner.”

An unlikely formula maybe, but in just 10 months it’s put Imran’s fledgling Oxford franchise of health care staff provider Kare Plus close to the top of the company’s earning’s league and achieving what company bosses have called: “Fantastic results in such a short time.”

A staff of nearly 100 - health care assistants and support workers - are currently servicing over a dozen care homes in the Oxford area. Imran wants to employ at least 25 more as part of his plan to double his business in six months. “There’s so much potential work out there,” he says. “What I need is more top class staff to take advantage of it. Good qualified health care assistants are like gold dust, but I’ll find them.”

Imran ran his own telecommunications business for eight years, but realised that as the mobile phone market burgeoned profit margins were being relentlessly squeezed.

“It got to the point where you had to be very big or very small to do well and we were in the middle,” he says. “We weren’t doing enough volume to compete with the big boys, but we still had a lot of overheads. I began to wonder if it was time to call it a day and try something else.

“My wife, who’s studying to become a psychologist, was the one who suggested the Kare Plus franchise. Although she had full-time studies, she helped me three or four days a week, which was an enormous help. It was a very steep learning process.

“The people at Kare Plus HQ provided a lot of help, but I tried not to rely on them too much. At the end of the day, it was my business and I wanted to build it up from the ground and work hard at it.”

The wifely advice has certainly paid off. The residential care sector is growing at an unprecedented rate - the UK is now home to three million people over 80, a figure that’s expected to double by 2030 and reach eight million by 2059.

“Now is the time to capitalise on this massive growth market - and that’s what I’m doing,” Imran says. “My plan is to double the size of my business in the next six months.”

Kare Plus, which recently won the 2016 Best Business award for best service range, entered the health care market in 1989 as a nursing company.

In 2010 it dramatically expanded as a national recruitment agency in the £4 billion health and social care staffing market and today counts some of the largest private hospital and care home groups among its clients.

It’s now a multi-service health care provider with over 70 branches supplying nursing care and medical staff to both public and private sectors, hospitals and nursing and care homes, plus services to people in their own homes and live-in care.

“Our franchisees can cover everything from providing health care assistants and cleaners to speciality nurses,” the company says.

“Kare Plus offers multiple income streams few other businesses can offer and there’s never been a better time to launch into the health and social care market. Several of our franchisees have achieved turnovers in excess of £1 million a year within two or three years.”

A Kare Plus franchise costs around £85,000, including working capital. Training starts with a week’s intensive tuition at company headquarters in Telford, followed by regular business and marketing updates and comprehensive help to get the business up and running

Mindful of cases - mercifully rare - of staff abuse, Kare Plus subjects applicants to a rigorous recruitment and selection process. Every applicant must have a wealth of experience and undergo checks, including an enhanced criminal record check, proof of identity, plus complete employment history, with professional references and mandatory training updates.

“We only employ the very best,” Imran says. “Giving the highest possible standard of service is what Kare Plus is all about.”

He is currently negotiating for a neighbouring territory and has further expansion plans for the future.

“There’s enormous potential in this market, if you can provide high grade staff,” Imran says. “For instance, Oxford is a wealthy area, where care homes charge over £1,300 a week. They demand the best people and are happy to pay for them.”

Back in Oxford, Imran admits he “knew nothing” about the care industry before taking on the franchise. “I picked up a lot of stuff I never knew, but what I did know was how to relate to people and how to talk to them and build a rapport,” he says.

“I have a good relationship with care homes because I don’t go in as a smart guy criticising the opposition and saying we are better and cheaper. I give them reasonable rates and top quality staff. Being good with people is what it’s all about.”

It could be that Imran’s wife isn’t the only psychologist in the family.