Monkey Music shares the power of music with Nordoff Robbins 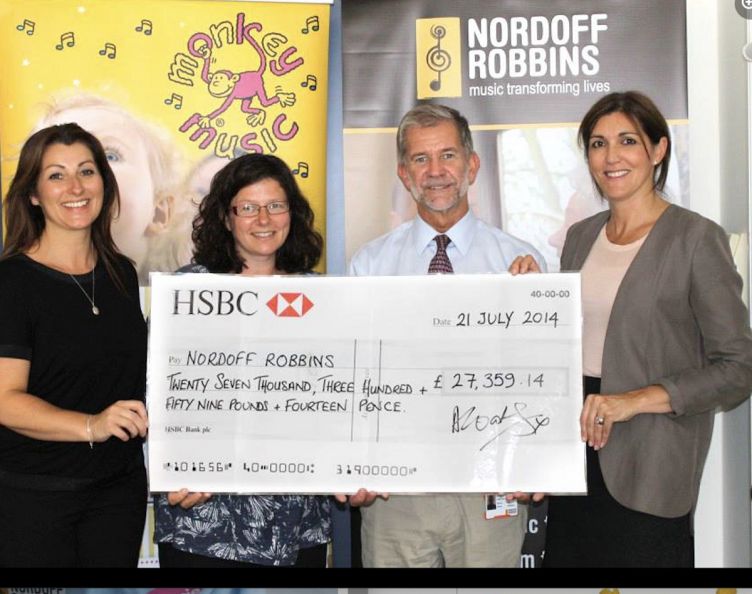 The organisations are well aligned and share many of the same values and beliefs by recognising the power of music to help transform and shape young lives, as well as support early years development.

Angie Coates, founder and CEO of Monkey Music, has always valued the role that music therapy plays in the lives of so many vulnerable people. This stems from when she attended the Guildhall School of Music and Drama which offered its own music therapy course. When Angie founded Monkey Music, she wanted to support a charity that was relevant to her business and where she could make an impact, so Nordoff Robbins became the franchise’s national charity.

Angie is now a spokesperson for the charity and her 50-plus strong network of franchisees are reaching more than just the children in their music classes. Spanning almost three decades, Monkey Music has donated tens of thousands of pounds to Nordoff Robbins through a number of initiatives and activities organised by the franchise, franchisees and their Monkey Music families across the UK. One example is the release of a new heart-warming song ‘Music is a Gift’ for Christmas 2019 with all proceeds going to the trust.

Nordoff Robbins is the largest music therapy charity in the UK, helping thousands of people each year by using music to enrich the lives of those with life-limiting illness, disabilities, or feelings of isolation. Believing music education should be accessible to all, they provide a range of different sessions for children and adults of all ages in 13 bases across the UK including London, Manchester, Newcastle and Scotland, working in partnership with over 280 organisations – including Monkey Music.

Alison Norman, a franchisee for Tunbridge Wells and Sevenoaks is equally passionate about supporting the franchise’s national charity and has helped raise a significant amount of money over the years. Appointed Monkey Music charity ambassador in 2019, she is responsible for promoting and widening the connection between the franchise network and their customers by engaging them to participate in fundraising events in their local areas.

“Our most recent fundraising campaign for Nordoff Robbins is a Sing and Play Challenge, which was born in the first national lockdown in April 2020,” explained Alison. “The aim was to involve our families in a virtual singing challenge when we were unable to be together in our Monkey Music classes. Families sing four songs a day for five days – for sponsorship – with each participant receiving a pack to support their challenge and a lovely certificate to pop in their little person’s memory box. The charity needed our support more than ever as it has been severely impacted by the global pandemic and in 2020 lost over half its fundraising due to all live music events being cancelled.”

“Thanks to our amazing franchisees, over 80 families around the UK have taken part and over 650 people have supported the campaign with a donation. We are so grateful to everybody who has joined in and our aim now is to reach our target of £20,000 by the end of the summer. This amount of money could fund two music therapists for a year to work in care homes - virtually and face-to-face - training staff, setting up dementia choirs and running groups and one-to-one sessions.

“When Monkey Music celebrated its 21st birthday, the great milestone gave us a platform to raise money and involve franchisees and customers once again. A week-long festival of activities during our music classes, including a birthday playlist and decorating birthday cards for our iconic pink monkey had everyone donating generously.  Presenting Nordoff Robbins with a cheque for over £27,000 on behalf of the franchise network was a proud moment,” continued Alison.

Franchisees also get involved in celebrating milestones with their own fundraising for Nordoff Robbins. Helen Whitaker of Monkey Music Bromley, Chislehurst & Hayes participated in a mini-triathlon event in May 2019, along with franchise neighbour and great friend, Alison Norman, to mark their 15-year franchise anniversaries.

“Alison and I wanted to commemorate our anniversaries with a fun event, which involved our teachers and customers. Setting a goal to raise £15,000 with 15 female triathletes, we smashed our target and raised over £16,000 with 20 participants! It was a fantastic day for ‘Team Monkey’. We were so proud of everyone that took part along with their supporters, plus our Monkey Music families, who donated so generously. We also received incredible support from our fellow franchisees around the country and both local and national businesses.

“A key member of the team was Ellie Fletcher, a former Monkey Music teacher who was then training as a music therapist with Nordoff Robbins. Now fully qualified, Ellie uses the power of music to enhance the lives of elderly people in care homes. For this reason, I have an even stronger connection to the charity and will continue to fundraise for this great cause,” explained Helen.

Monkey Music is looking forward to deepening its relationship even further with Nordoff Robbins and has lots of new initiatives planned to involve the franchisees and their customers in the near future. With a shared belief in the power of music, the partnership looks set to enhance many more lives over the coming years.