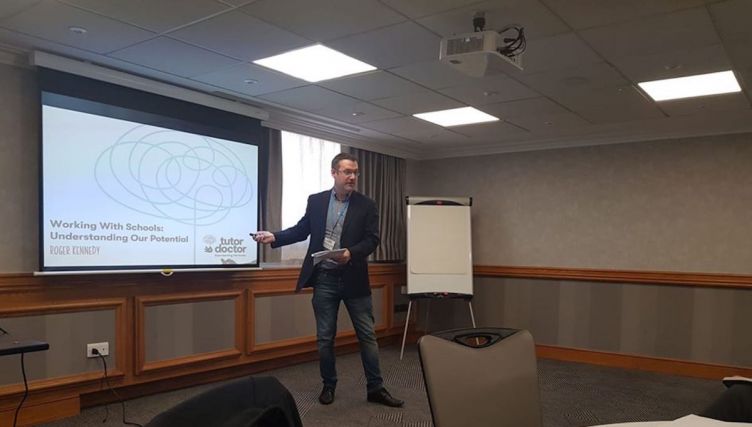 Roger Kennedy has had quite a career. He went from the theatre stage to the small screen and even dabbled with stand-up comedy before finally finding his passion for education; all before the age of 30. After seven years in teaching, disillusioned by what he describes as the “daily bureaucracy”, Roger decided that he wanted to take control over the help and support he could offer young people. Less than six months into his new Tutor Doctor business, Roger says he has only one regret: not doing it sooner!

“I get such an immense sense of pride from my business, I have to stop and pinch myself sometimes,” he explains. “Education was always a passion but to be able to go into people’s homes and make a difference in their lives, there’s no greater feeling. Education is the best way to help children academically and beyond. What we do is about more than book-learning; we help build self-confidence and self-worth. This was important to me as a teacher and now it’s what drives me.”

Majoring in drama and English literature, Roger graduated from university in 2004. Over the next five years, he established his own theatre company, toured the UK as an independent actor and stand-up comic and even appeared on TV. Keen to share his love of the arts with young people he decided to train as a teacher and qualified in 2009. Unsurprisingly, Roger initially specialised in drama but later moved into English due to demand for high-quality teachers in the subject. For the next eight years, he taught in schools around London – from inner-city academies in Tottenham and Walthamstow to a privately-run all-girls school in Letchworth. But as time went on, increasing pressure and ever-changing policies left Roger feeling unable to do the thing that mattered to him most: helping his students to achieve and grow as individuals.

“I became disillusioned with certain elements of the role and the constantly changing policies. It almost became that the evidence of achievements was favoured in place of genuine knowledge and interaction of your students. Teachers want to make a difference and see students’ progress but it’s being taken away from them.”

Determined that he still wanted to make an impact in children’s’ lives, as his contract with his last school came to an end, Roger started looking to into starting his own education business. But his dream was short-lived, as the reality of going it alone set in. “I began to realise that learning how to run a business from scratch was going to be a long road and it was actually quite daunting,” he says. “Instead, I started to research the concept of franchising because I knew that it was based on proven business models and there was a level of support and existing systems in place”

Confident that franchising was the way to go, Roger attended the National Franchise Exhibition in Birmingham. It was whilst at the show that he first found Tutor Doctor. But, determined to proceed with an open mind, he considered all options and looked at everything from health and courier franchises to man-in-a-van and management concepts.

“When I came away from the show I continued to research all the options and one by one closed them all off. I realised that the obvious was staring me in the face with Tutor Doctor. I kind of had a light-bulb moment and thought to myself: ‘why not choose something that I have a knowledge of and a passion for?’ I started to think about the need for it in the community and to be honest, I never looked back.”

Tutor Doctor is the fastest growing in-home tutoring franchise in the world. Franchisees operate at the heart of their local communities, helping children to grow in confidence and ability. The brand thoroughly assesses a child’s needs and then carefully selects the best-fit tutor based on goals, personality and learning level. Instead of the traditional centre-based model, tutors visit students at home, at a time that is convenient for them. Tutor Doctor franchisees arrange and oversee the tutor/student relationship for a truly bespoke solution and exceptional level of service.

“The recruitment process wasn’t easy! And the fact that it wasn’t easy really reassured me. I could tell they took real pride in the brand and the quality control over who was coming in. As part of my due diligence, I spoke to other franchisees and the family-feel and supportive nature of the network was clear. The openness and enthusiasm from the team totally sold it to me in a genuine non-salesy way.  I thought that all of this, coupled with what I could bring to it could be a dynamite combination!”
After you launch your franchise, you are actively supported across all areas of your business through structured training programmes, weekly coaching calls, weekly global calls and on-demand support as you need it. As your business grows, we have specifically designed support systems to help you continue growth, build momentum and ultimately scale your business to help you achieve your financial and personal goals.

“Collectively you create something quite magnificent”

“The training was fairly intense but I was like a sponge – I still am! I enjoyed the classroom-based programme in Canada the most. It was brilliant to meet other new franchisees at the same point in the journey as you. The thing I took away that really stuck with me was that geography means nothing; we’re all working towards the same goal and we built a great bond. We learnt about strategy, marketing, sales and IT. We touched on everything from accounting to networking and closing the sale. There was lots of role play for things like mock consultations which was really useful. It cemented the fact that this was a great product.”

“In terms of support, we had a 12-week ‘jump-start’ programme with weekly sessions with our franchise developer working on sales and marketing and also had a weekly meeting with all new franchisees where we shared experiences and ideas. Even now, there’s always someone there if you need them. I’m already working with a neighbouring franchisee who launched in November. The openness and collaborative nature of the network are key! Collectively you create something quite magnificent.”

Tutor Doctor has over 500 franchise territories in 15 countries worldwide. Over the past three years, consumer spending on tutoring has increased by seven per cent to 10 per cent each year. One-on-one tuition has exploded into a £1bn-a-year industry that annually serves over two million children across the UK. The Tutor Doctor UK network of 45 franchisees all enjoy an exciting, scalable business whilst making a positive impact in the lives of children.

Roger, now 35, launched his Tutor Doctor business in Hitchin and Stevenage in January 2017. In less than six months, he’s already working with over 40 families in his community as well as a local school. Not to mention providing regular work to the 25 local tutors he’s recruited to date.

“We’ve had a great take-up in the area. Student workloads have increased dramatically, including homework – and parents are often busy working and are time-starved so invest in the extra support for their children. Our service helps families out and alleviates that stress whilst enabling children to progress. I’ve got some fantastic tutors on board and I’m getting great feedback, so we’re already getting business through referrals.”

“I’ve been incredibly lucky that everything has come together for me – my background and experience couldn’t be a better fit. I love where I live and the community that I’m in – I take all of that and when I go into consultations and talk to people, I feel confident, passionate and feel that I’ve got a lot to share.

“I’m inspired to aim for the stars. Not just for my own success but the success we can help every student to achieve. The beauty of Tutor Doctor is that you’ve got the systems and support but you’re free to chase the opportunities in your area in a way that works for you! I’ve got a huge list of strategies that I want to implement and it’s great that you can do that within the model.”

When he’s not busy building his new empire, Roger is a sports-fan and fitness enthusiast and enjoys swimming and golfing. He still loves the theatre, and of course, stand-up comedy. He has fond memories of his time as a stand-up comic because that’s how he met his wife, Daria. The couple have two young children and Roger loves the new-found freedom that his business brings to family life.

“Being in control of my schedule is wonderful and it’s given me the freedom of time with my family – I can drop my daughter off at school and see her in school plays. I feel liberated, optimistic, well supported and I’ve even got enough time to go to the gym!”