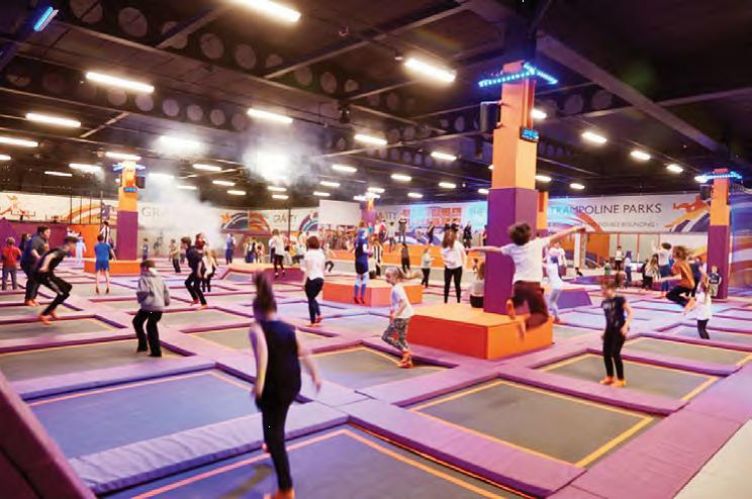 Gravity Trampoline Parks offers the opportunity to operate a profitable franchise with some of the world’s leading landlords and in the most prominent, high footfall retail and leisure destinations.

Harvey Jenkinson, company cofounder and director, says: “The indoor trampoline park business has been in existence over 10 years in the US and still enjoys tremendous growth.

“Much of Europe and the rest of the world is still poised for explosive development. With the right partners and commitment to best in class locations, Gravity can capture this opportunity. Through the franchising model, we are looking to partner with experienced individuals or companies with entertainment, leisure or strong customer service backgrounds.”

How it all started

In 2014 Michael Harrison, Harvey Jenkinson and Simon Whicker founded Gravity Trampoline Parks, with the vision of opening a unique leisure offering in the UK’s most sought after leisure and retail destinations.

Gravity now operates eight parks in the UK’s premium retail and leisure centres. These include sites such as Xscape Yorkshire and Bluewater Shopping Centre, with leading landlords such as British Land, Intu, Kames Capital and Land Sec.

Director and co-founder Michael Harrison says: “As you can imagine, the last three years have been hard work and we as a company have learnt many things along the way.

“The whole thing started from very humble beginnings, with my business partner and I having to sleep on the trampolines rather than pay for hotels during our first project in Xscape Yorkshire.

“Not only did we design and brand the company, but we physically built the park with our own hands. Harvey and I have worked in every role in the business, from serving on the tills to acting court monitors, and understand every aspect of this business from the ground up.”

Michael was born into a travelling funfair and his family settled in a coastal Yorkshire town when he was 12, setting up a fun park and pleasure pier. He dropped out of school at a young age to work his way through the business in every role - from pot washing to acting CEO. There is no part of the leisure sector he has not worked in or experienced.

His business partner Harvey had spent 10 years in the super yacht industry.

Harvey explains: “My key skills lie in project and personnel management. My day-to-day focus is on creating a team that is capable of the continued growth we are planning within the sector.

“I communicate daily with multiple landlords, property agents and our legal team to guide our progression and manage our head office team alongside Michael to ensure we have the right people in the key roles that enable Gravity to succeed and continue our expansion.”

The company directors have known each other since childhood, but it was Harvey, while working in the Caribbean, who formed a friendship with Simon Whicker, an ex-KPMG partner.

Simon would become the third major shareholder in the business and became part of a formidable team that would quickly grow in reputation and success.

While Simon is based outside the UK, he brings a wealth of experience to the company on a daily basis and has helped shape the structure of the business. His expertise is in insolvency, which has enabled Gravity to develop many key areas of control that can often cause new businesses problems as they grow.

Gravity currently employs over 300 team members, has secured £5 million worth of investment from Guinness and has now been valued at over £30 million.

What’s next for gravity?

Gravity has now developed into much more than just a trampoline park.

Michael says: “As time goes on, it’s important our brand continually develops to remain at the forefront of the leisure market. Our first park at Xscape Yorkshire was a very simple concept - not much more than lots of interconnecting trampoline beds.

“With each new park that opens, we will continue to develop and stay ahead of the game. In larger units, Gravity also includes completely separate offerings such as adventure golf and family entertainment areas to ensure maximum utilisation of the unit and ultimately maximise profits.”

Gravity has established itself as the landlords’ ‘park of choice’ and is now actively searching for franchisees in Europe, Scandinavia, Russia, the Middle East and Asia.

Harvey recalls: “Michael and I were blown away with the interest we received at MAPIC and after three years of fine-tuning and creating the perfect leisure operation, this gave us a perfect platform to push on with our franchise aspirations.”