Dublcheck is a Thriving Franchise 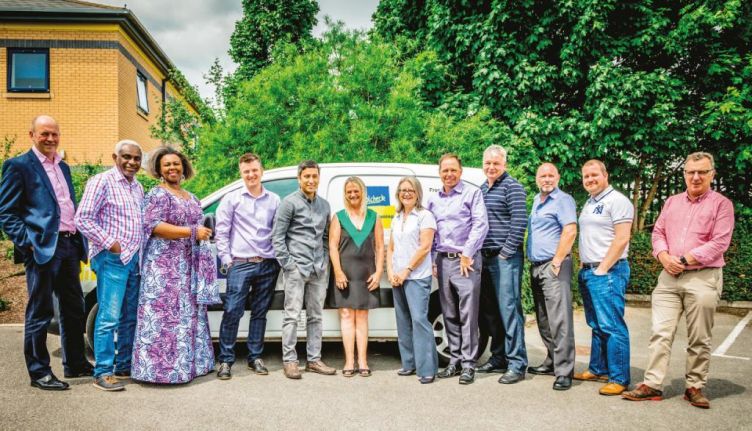 It’s fair to describe Dublcheck franchisee Damon Deiches as a busy man. When I finally catch up with him on the phone he’s with a contractor in west London carrying out one of his regular visits - after a full day at the high street bank where he works during the day.

Having exceeded his own expectations as part of Dublcheck, the UK’s biggest cleaning franchise, fairly early on with the company, Damon’s optimistic outlook and confidence bursts out of him and you can tell he’s happy with what he’s achieved.

“I do work hard, I’m a busy boy and I love it,” he laughs. Five years after that initial investment, Damon now has 65 contracts.

With Dublcheck, new franchisees can choose a guaranteed initial turnover, which means they benefit from the security of a guaranteed gross profit.

“To get to this level takes hard work, there’s no denying that,” Damon explains. “Sundays are my family days when no one can disturb me, but the rest of the time it’s nose to the grindstone. I have 59 staff now, including two supervisors and an area manager.”

He also has a clear idea of where he’s headed: “I do have a goal. I want to achieve a million pounds in turnover - and I should be halfway there by the end of this year.”

Perhaps it’s also fair to describe Damon as ambitious as well as busy.

It’s an enviable position to be in and one Damon admits would not have been possible without the help of his wife Beinazir, who for the first 12 months after he bought the franchise ran it for him while he continued to focus on his work at the bank, coaching staff in new systems and processes.

“I don’t think I could have got this far with the Dublcheck business without my wife,” Damon says. “You need that kind of support when you’re starting a business - without it you’d struggle.”

Now a mother of two young children and Deputy Mayor for Kensington and Chelsea, Damon’s equally ambitious wife leaves him to the business of running the Dublcheck franchise so she can focus on her own career.

He, in turn, is hoping to hand over the reins to someone else over the next few months - his area manager.

“In six months’ time he’ll be running the show and the only thing I’ll have to do is make sure everyone gets paid,” Damon says. “By the end of this year I should have a turnover of around £500,000 and that’s where things will start to get interesting.

“The goal is he does more and more and runs all the day to day stuff. He’s only been with me three months and he’s on the brink of taking over, so I can take a step back and have more time with my family.”

It’s taken Damon five years to get to where he is now, but you get the feeling he wouldn’t have it any other way.

“When you start up in business you’re taking a huge risk and have to start small and build up slowly,” he adds. “The benefits of buying into a franchise are clear - you’ve got the support. And for me the main reason to choose Dublcheck over any other cleaning franchise was the sales support.

“They guaranteed a particular turnover and got the contracts for me, so I didn’t even have to do that. In fact, the support I received from Dublcheck has been phenomenal. I’m in touch with them at least three or four times a week and they support me with accounting, invoice chasing, the legal side, employment law and onboarding new contracts.”

Why, as a successful bank employee, did Damon feel the need to stretch himself further? His infectious enthusiasm and focus on a brighter future comes to the fore again: “My boss, an area manager, got made redundant and alarm bells started ringing.

“The scope is endless. What place doesn’t need cleaning? In London every building you see needs cleaning and who is going to do that? A company where the people who run it have a vested interest in doing a good job. And where you get the sort of support that enables you to build your business realistically.”

Dublcheck supports Damon with sales leads through its dedicated telesales department based at head office, which enables him to attend qualified appointments with customers who are looking for a cleaning service.

Over the past 25 years this has been a proven system, which Dublcheck cascades to their franchise network in order for them to achieve their goals.