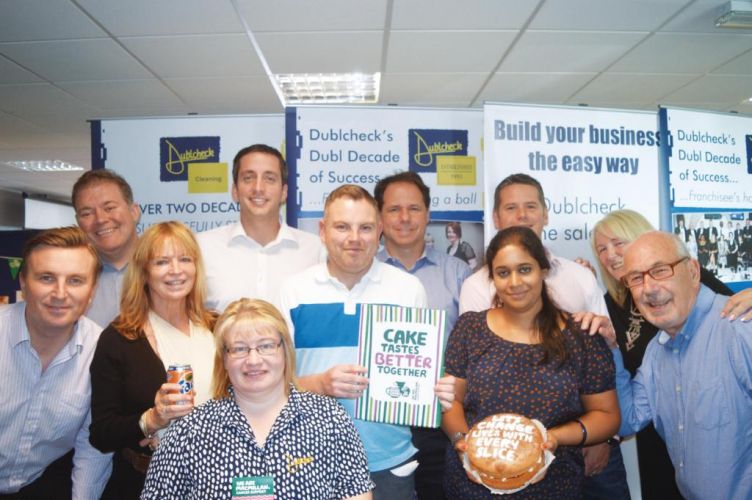 Dublcheck gives franchisees a guaranteed income and the flexibility to have a life as well. John and Jan Power tell us why they’re so happy with the Dublcheck commercial cleaning franchise

When John and Jan Power decide they want to do something, you can be pretty sure it’s going to happen.

The husband and wife team, who have been married for 48 years, decided to quit their jobs as an insurance broker and a librarian 17 years ago.

As Jan explains: “We had an insane idea to do something together, something to do with food and drink, something we were interested in and knew we were good at.”

The result of their “insane idea” was owning and managing a 15-room boutique hotel just outside Swansea, which they proudly admit was a huge success and had a clientele that included superstars and politicians.

After many years in the hospitality business, in 2006 they decided to sell up and retire. However, the dynamic couple realised after a few years that they missed working and needed a new project.

John takes up the story: “After seven years of retirement, we decided we wanted to do something again. We missed the excitement of running our own business, but after the intensity of running a hotel we felt going into franchising, with the obvious advantage of less risk, was the best plan.

“When you’ve been running a business that’s really busy and then suddenly you’re not really doing anything, let’s say you can only play so much golf.

“We knew we needed more money to maintain our lifestyle and had elderly parents and an aunt who needed our support, so we decided to look for a franchise.”

The couple read about Dublcheck in Making Money magazine and were attracted to the company, but at first weren’t 100 per cent sure a cleaning franchise was right for them. It didn’t take too long for them to change their minds.

“We looked the length and breadth of the country, but none of the franchises we looked at floated our boat,” John says. “Then Dublcheck came to the fore again.” The couple attended a franchise exhibition in Swansea in 2013 and were immediately drawn to the Dublcheck stand.

“We talked to the Dublcheck team on the stand and were very impressed,” John says. “We liked the company’s guaranteed turnover scheme. We decided we had to follow it up this time.” That was the turning point for John and Jan.

Founded in 1993 by Carol Stewart- Gill, Dublcheck has been providing premier cleaning services for offices, showrooms and health facilities throughout the UK for over 23 years.

The company operates a guaranteed turnover scheme and support to enable franchisees to concentrate on customer service and develop their business further.

“We went to Chester to meet Dublcheck and found out they were such nice people - that was the clincher,” John explains. “At our time of life, we want to enjoy what we do and like the people we work with.”

The couple invested in a Dublcheck franchise and were guaranteed £3,000 worth of business per month.

John adds: “At our age [John is 69 and Jan is 68], we put parameters on things such as travel distance, as we wanted to work in the local area. We now have 10 staff working for us and the next plan for development is to get more business and make one staff member a supervisor, so they can be responsible for providing cover.

“We are both good at talking to people and have managed to get more business ourselves - our turnover is now £4,000 per month. That may not sound much to some people, but I don’t think there are many people our age in this business and it works for us. We’re not empire building, we like the flexibility.”

What advice would John give to potential franchisees?

“Dublcheck does all our invoicing and paperwork and for them to take such a time consuming part of the business away from us is so valuable. We like the support the company offers too. There is always someone at the end of the phone who can find an answer to anything you need to know.

“The key to franchising is positivity. Just the same as with other ventures, you have to make sure you choose wisely.

“We have guaranteed income, yet we also have time to do the things we want to do. We have two elderly relatives who need our support and I still like to play golf a couple of times a week. We don’t let the business run us - we run it.”

What’s next for the couple?

“We still want to get bigger - we’re doing okay, but we could do with more business,” John says. “The Dublcheck model is based on the turnover guarantee and there are various ways of getting more business.

“Our preferred route is to buy appointments from them and see customers right from the start. We are slowly building up business in a way that works for us.”

You get the feeling speaking to John and Jan that their drive and determination will take them a long way.

Carol Stewart-Gill says: “If you put the effort in, the rewards are there”