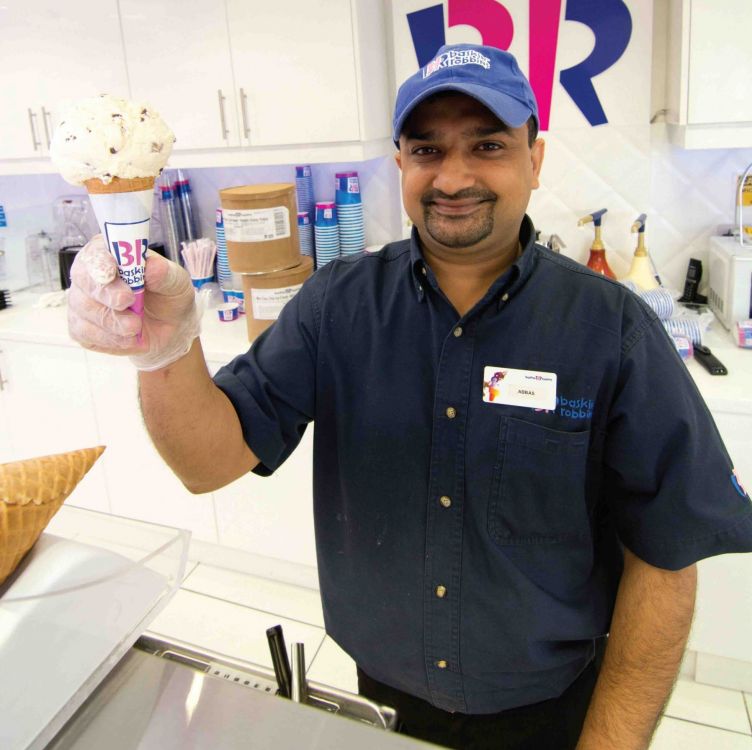 Baskin-Robbins has announced major expansion plans in the UK

Baskin-Robbins, the world’s largest chain of ice cream speciality stores, announced plans in May this year to greatly expand the brand’s presence in the UK. The firm is looking to nearly double its number of locations in the UK with the addition of 80 new free-standing restaurants over the next three years, in the process creating up to 400 new full and part-time jobs.

“Baskin-Robbins takes pride in delighting guests the world over with its rich library of ice cream flavours and wide array of frozen treats,” says Nigel Travis. “With the development of these additional restaurants, even more ice cream lovers across the UK will be able to enjoy our premium ice cream, ice cream cakes and frozen beverages, all served in a fun environment and at a great value.

“This is also great news for the British business community. Baskin-Robbins’ further growth in the UK provides an excellent opportunity for those looking to develop a franchise business. It also means hundreds of new jobs, which we are particularly pleased to be supporting.”

Baskin-Robbins stores continue to be popular as their products are an affordable treat for families - they sell in excess of 300 million scoops of ice cream each week across 6,700 stores in 50 countries. The company’s mission is to make the Baskin-Robbins neighbourhood store a tasty, fun place for customers.

Baskin-Robbins currently has almost 100 locations in the UK, including freestanding restaurants as well as concession locations in other shops and cinemas.

Estimated to be worth £841 million this year, the UK ice cream market has grown, with perceptions of ice cream as an ‘affordable luxury’ outweighing thriftiness and health considerations in the recent economic difficulties of the past few years. In the UK, premium ice cream has proved hugely successful and now accounts for just under a quarter of value sales.

Figures from market research specialist Mintel also show that the ice cream, sorbet and frozen yogurt market has withstood the economic difficulties in the UK and was estimated to be worth £1 billion in 2011 - up from £998 million in 2010 and £975 million in 2006. It appears consumer demand is not set to thaw in the future either, as Mintel forecasts the ice cream market to grow even further, increasing 11 per cent by 2016 to reach a total of £1.13 billion.

Eaten by around nine in 10 consumers, the ice cream market has remained resilient to recessionary pressures. Indeed, it seems that the tighter money becomes the more people look for evenings in and indulging themselves - supporting demand for ice cream. Nearly two thirds of Brits choose an ice cream as a treat and a quarter say they eat it on a night in or as a dessert when entertaining guests - boosting the Baskin-Robbins revenue generated by takeaway ice cream and ice cream cakes.

Nearly three quarters of a century ago two brothers in law shared a dream to create an innovative ice cream store that would be a neighbourhood gathering place for families. Burton ‘Burt’ Baskin and Irvine ‘Irv’ Robbins had a mutual love of old fashioned ice cream and a desire to provide customers with a variety of flavours made with ingredients of the highest quality in a fun, inviting atmosphere. The franchise model created by Burt and Irv decades ago is still used by Baskin-Robbins today.

Baskin-Robbins is 100 per cent franchised, with each owner holding a stake in the business’ success, while product development and merchandising are handled at Baskin-Robbins headquarters. This hands-on, small business approach gives franchisees the ability to create a strong presence in local communities all over the world.

Says franchisee Mohammed Shareef: “It has been great fun working with Baskin-Robbins. It is a brand that sells happiness and we feel very proud to be a part of it. Our happiness factor greatly increases with the addition of every store to our portfolio.”

Baskin-Robbins multi-store investors in the UK will need at least £300,000 liquid capital and available funding of another £700,000 to complete the roll out and operation of 10 stores over 24 months. For smaller geographic locations, there is an option for a five-store development agreement. In turn, Baskin-Robbins has developed an all-encompassing growth strategy and support package to make this happen as smoothly and cost effectively as possible.

A typical area containing five stores has the potential to turn over £1 million in the first full year of trading, with EBITDA of 10-15 per cent (full details are available during a discovery meeting).

As an investor, you will know that many factors impact on the financial performance of a business venture, but with the Baskin-Robbins franchise model you will be helped to maximise profits. For the full year 2011, Baskin-Robbins’ stores had global franchisee reported sales of approximately $1.8 billion.