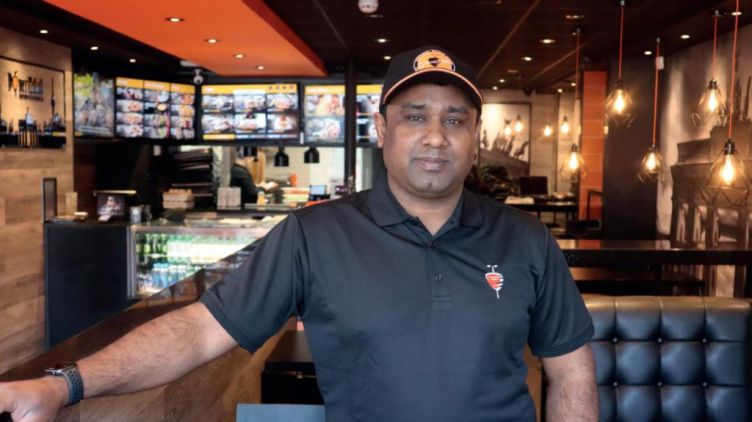 Time was when a kebab was something you grabbed in a hurry on the way to the last bus after a few drinks with mates and tried not to imagine what mysteries might lurk beneath its usually greasy surface.

Times have changed. And so has the kebab, which has metamorphosised, through eye-catching branding and thoughtful marketing, into something classic, authentic and, above all, healthy.

German Doner Kebab, known as GDK, is a fast food franchise that was created in Germany in 1989 with a mission to launch an easy to manage business and provide fresh, tasty and nutritious food, combined with elegant surroundings and excellent customer service.

As a GDK spokesman says: “Food trends can come and go, but there’s no denying that the global shift towards finding an artisanal experience that doesn’t cost the earth - in a street food or food-to-go format, rather than a stuffy restaurant - is here to stay.

“While dozens of gourmet burger brands fight it out to be number one in their sector, GDK is the undoubted leader in the kebab market. GDK is very family-friendly, loved by the Instagram generation and has well and truly disrupted the kebab market.”

Doing more than his share of disruption is 38-year-old Hemanth Bollini, who has opened five GDK restaurant-cum-takeaway franchises in the London area and has plans for another 15 in the not too distant future.

He says: “The concept of German Doner Kebab instantly appealed to me. The store concept was very attractive and the food quality was extremely high. The fast food market is very competitive and usually seen as unhealthy, but GDK has brought a new dimension to the kebab market by offering a quality fresh gourmet range that is also healthy.”

Origins of the kebab

They were eating kebabs in the 14th century, when soldiers grilled chunks of freshly-hunted animals on swords over open fires. Historians believe the doner kebab originated from Turkey as part of a main meal eaten with rice, bread and vegetables and was brought to Germany by Turkish immigrants.

But they found that German customers preferred eating kebabs on the go, so turned them into a quick takeaway snack by putting salad and meat inside bread.

There are almost as many entrepreneurs willing to take the credit for the German innovation as there are varieties of kebab. One claimant was Turkish guest worker Kadir Nurman, who claims to have created it in 1972. He arrived in Germany to work in the printing industry and realised there weren’t many substantial options for busy German workers looking to eat lunch on the go.

Others anxious to claim the credit were Turkish immigrants Nevzat Salim, who claimed to have produced the first German kebab in 1969, and Mehmet Aygun, who says he came up with the idea in 1971.

Whoever invented kebabs, Germans currently buy two million a day from over 40,000 outlets. They’re the country’s number one street food and demand shows no sign of slowing down.

Not surprisingly, the GDK franchise took off pretty spectacularly when it was launched in Germany in 1989. It opened its first store in Berlin and spent the next 10 years perfecting its products and business plan. Today the company has over 60 restaurants thriving in Europe and the Middle East, while rapid expansion plans are also on the cusp of becoming a reality in the USA, Canada and Ireland.

What you get for your money

The cost of investing in a store is around £250,000-£300,000 and includes comprehensive training and support. GDK’s week-long induction programme covers brand values, the use of operational software, customer service training, plus sales, marketing and business administration.

Franchisees get at least two days’ aftercare from an expert once their store has opened and access to an ongoing support and development programme designed to accelerate the growth of a business, particularly in the crucial early stages. There is daily telephone support available and regular business mentoring and visits.

What makes GDK different? The company explains: “We have created something authentic but healthy, with lean succulent meat, handmade breads and signature sauces.

“Our methods are totally different to the way other operators make their kebabs. The result is a nutritionally sound gourmet food experience that contains virtually no preservatives or additives.”

GDK says its franchise is simple to operate. The blueprint is firmly in place and the business doesn’t even need a qualified chef to prepare meals - it’s more a case of assembling top-class ingredients. In other words, you’ve got what’s been called a German engineered kebab.

The first UK franchise opened in Birmingham in 2015, followed by a flagship store in London’s Fulham Broadway. The company plans to have 700 franchise stores in the UK in the next 10 years and a further 1,500 worldwide.

UK franchises are run by Glasgow-based United Brands, which bought world rights in 2017. United Brands has signed up over 200 franchise locations across the UK. The company’s owners, the Sarwar family, operate one of Scotland’s most successful business groups.

The £230 million business empire includes a wholesale cash and carry operation, over 500 franchised convenience stores, a chain of pubs, Asian restaurants and a pharmacy group.

The company says: “There is nothing else like GDK. It definitely offers a unique opportunity for serious investors. GDK is focused on quality and is committed to changing people’s conception of the kebab.”

A franchise business of his own

No wonder Hemanth, with vast experience in the franchised takeaway business, was not long in flagging up GDK as something well worth looking into when he eventually became his own boss.

Hemanth originally believed his career would be in IT and enrolled at the University of Madras to study for a degree in maths and statistics. But things didn’t work out that way. To help fund his course, he started working for the local Domino’s Pizza store as a part-time order taker and quickly became fascinated by the food industry.

As he tells it: “It was meant to be a short-term move to help pay for my university studies, but I quickly gave that up to go full-time in the franchise food sector and 17 years later I’m still there. I moved from an order taker to store manager within a year and was eventually managing 21 Domino’s stores.”

Looking for further career opportunities, Hemanth moved from India to the UK in 2006, continuing to work for Domino’s in a variety of management roles, but always on the lookout for a franchise business of his own.

He finally found what he was looking for in 2015: “For me, German Doner Kebab ticked all the boxes. The store concept was visually very attractive and the quality of the food extremely high. In recent years, the doner kebab often had a somewhat tarnished reputation as something you have after one too many drinks. GDK turned this on its head.”

To finance the venture, Hemanth went into partnership with a former Domino’s boss and opened the first of what would become a chain of GDK restaurants in 2016.

“We chose Islington because my business partner knew the area well and thought it would be a great location as regards our target markets and footfall numbers,” he says.

On to a winner

And so it proved. “The reaction was everything we’d hoped for,” Hemanth says. “Customers kept coming back and were telling us ours were the best kebabs they had ever eaten and that they loved our set-up. People got blown away after their first bite. Like any new business, we had our challenges, but it seemed that we were on to a winner.

“There were plenty of kebab shops around, but none were at the same level as ours. The bread and fillings are unique and different and the meat is of the very highest quality. Our kebabs also contain half the calories of many of our competitors.”

The winning formula led to rapid expansion. In the next two years, Hemanth and his partner opened their Croydon store, followed by Finsbury Park, Kilburn and the award-winning Fulham branch.

Hemanth explains that, in contrast to most kebab outlets, GDK is primarily a sit-in restaurant as well as a takeaway, with around 60 per cent of customers eating in, depending on the location.

As he says: “The concept is quite simple: go to the counter, place your order, take your seat and the food will be freshly made and delivered to the table.

“One of the secrets of our success is never deviating from the highest standards. Go into any GDK store and you’ll get exactly the same standard of product. All the meat and bread is provided from the factory in Germany and the signature sauces come from Dubai.”

The company says: “Quality and consistency is vitally important and we can only do this by providing all our own ingredients. All meat is 100 per cent pure and grilled not fried. We claim our kebabs provide a healthy alternative to burgers - and one million fans on our Facebook page can’t be wrong.”

Round the clock business

Indeed, it would seem the appetite for GDK products is well nigh insatiable.

“We open at 11 am, but people are outside the door at 10.30 am and we stay open until 4 am,” Hemanth says. “Once kebabs were mainly eaten at night maybe after a few beers, but now they’re eaten virtually around the clock.”

The takeaway business is flourishing too. Hemanth recently delivered 120 kebabs to an office party and the five businesses are manned by 120 part-time staff working shifts.

“Of course, it’s hard work,” he says. “But it’s not that challenging because the beauty of the franchise model is that all the problems have been ironed out of the system.

“So long as you stick to the operation guidelines, the chances of failure are pretty remote. And of course, you get excellent training when taking on a franchise. It took me a long time to find the franchise I had dreamed of running ever since I started with Domino’s back in India. It was certainly worth the wait.”

1. Learn everything there is to know about your existing business before you expand so that nothing during the expansion will take you by surprise.

2. Build the best possible team around you. Having people you can trust is key to building a portfolio of multi-unit stores. Once staff have the required experience, they can be moved to take on new businesses.

3. Have an efficient chain of command. Hemanth says he has strong general managers who control the stores and report to the operations manager, who in turn reports directly to Hemanth. He also keeps in regular contact with GDK’s head office. The object of the whole exercise is to maintain the very highest standards of products and service.

5. Encourage good networking skills. Remember, even with the internet, word of mouth is still the best way to get new business.

6. Learn to delegate. You can’t be everywhere at once. Widen employees’ skill sets and prepare them for the responsibilities of management.

7. Keep up to date. Make sure you’re not falling behind the latest industry developments. This could mean extra investment, but it’s well worth the money.