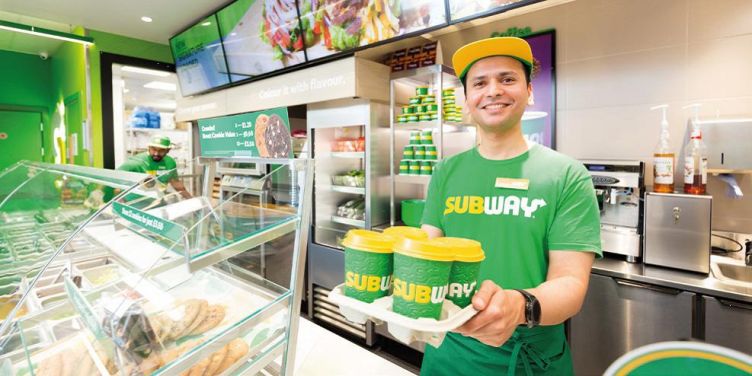 After deciding he wanted to own his own business, Abhi Prakash says Subway was the obvious choice

Is one of your New Year resolutions to run your own business in 2020? A Subway franchise could be the step into business ownership you have been looking for.

Franchising is one of the most successful routes to business ownership. It enables hard-working, entrepreneurial individuals to fulfil their ambition to become their own boss, but with the added reassurance that they are investing in a tried and tested business model.

Abhi Prakash became the proud owner of his first Subway store in Ilkeston, Derby in 2019 at the age of just 27.

It was a simple change of heart that led him to a Subway franchise. After graduating from university with a degree in medicine, Abhi changed his mind about his career path, deciding he wanted to own his own business instead of working for someone else.

After trying several options, including recruitment, he decided a franchise would be the best and lowest risk route to business ownership for him.

The choice of franchise wasn’t a difficult one for Abhi. He researched many different types of franchise, but knew he wanted to work within the food industry for a well known brand with low costs. Subway was the obvious choice.

Abhi says: “I grew tired of working for others or sitting at a desk. I wanted to be physically involved in a business, making the decisions and on my feet, not sat down all day. Making the choice to open a Subway store has been a long journey, including all the research, but it has been fun, interesting, a lot of work, but totally worth it.”

The support offered by Subway was a big factor in Abhi’s choice of franchise.

He attended a two-week training course at Subway’s UK and Ireland support centre in Cambridge. During this training, new Subway franchise owners take part in both classroom and store-based training. Beyond this course, Subway’s team of business development agents are on hand to answer any questions or offer advice to franchise owners at any point during their Subway franchise career.

“There is a lot less risk with a Subway franchise compared to going it alone,” Abhi says. “The business development team is always on hand to answer any questions I have, to help if something goes wrong or if something happens unexpectedly that hadn’t previously been planned for. There is so much to learn, but you are never alone.

“I didn’t have any previous food industry experience and the business development agents have been able to answer any questions I’ve had and point me in the right direction. Subway is great because all the food is made in front of our guests. There isn’t any grilling or frying or need for any big or heavy equipment, so with a bit of guidance it has been easy to navigate the set-up process and managing the store.”

With new and existing store opportunities available throughout the UK and Ireland, Subway is keen to hear from entrepreneurial individuals who want to join one of the largest and most popular franchise brands.

At a glance Subway