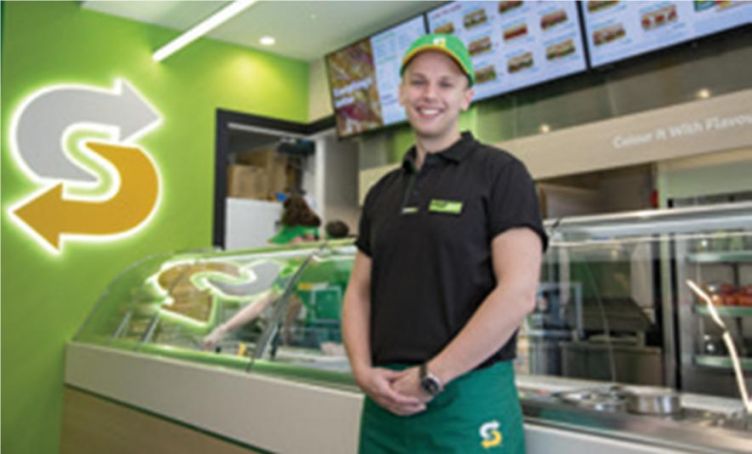 For Myles, investing in a Subway franchise was the perfect way to become his own boss

Subway is one of the largest and most successful franchise brands, with over 2,500 stores across the UK and Ireland, and is always on the lookout for go getting, customer focused people who want to join a world renowned franchise system. The franchise sector is one of the most successful routes to business ownership. It enables hard-working, entrepreneurial individuals to fulfil their ambitions, but with the added reassurance that they are joining a well established and robust franchise model.

Myles Bull is one of a growing number of millennials choosing to run their own business, deciding to become a franchise owner with Subway.

While at university, Myles began researching franchise ownership. His first job after university allowed Myles to develop his people management skills and experience, before he took the leap into franchising.

Myles explains: “I have always wanted to run my own business and franchising seemed like the perfect way to achieve this. In the first couple of years, many new start-ups fail and it’s very difficult to make a profit. With franchising, you can hit the ground running using a tried and tested business model.

“What’s more, with a franchise like Subway, there is an existing customer base and excellent brand awareness. There is also a strong support network in place. It’s the ideal model for entrepreneurial individuals who want to start their own businesses, but with the added reassurance that they are joining a proven system.”

Myles was keen to open his first store in Maidstone and was planning to move there after finding a house on a new community development. After talking to the Subway business development team for Kent and Surrey, it transpired that a retail unit was also available at the same development. Myles snapped up the opportunity.

He opened his store in March 2018 and was one of the first in the UK to feature Subway’s new Fresh Forward décor - a modern format featuring clean lines and customer focused touches, such as digital menu boards, free-to-use charging ports and special displays for the brand’s cookies, bread and vegetables.

Like all franchise owners new to Subway, Myles attended a two-week training course at Subway’s UK and Ireland support centre in Cambridge, which included both theoretical content in the classroom, as well as time in a store.

“The training was really helpful and it was fantastic to be able to put this into practice once the store opened,” Myles says. “But the support doesn’t stop there. The ongoing advice and guidance provided by the Subway business development team is invaluable.”

Over 70 per cent of new Subway stores are opened by existing franchise owners and Myles has ambitious plans to become a multiunit owner.

“I went along to a Subway convention last year where I met a number of multi-unit owners and that’s definitely where I see myself in the future,” he says. “I plan to expand a store at a time and am already looking to purchase a second store this year.