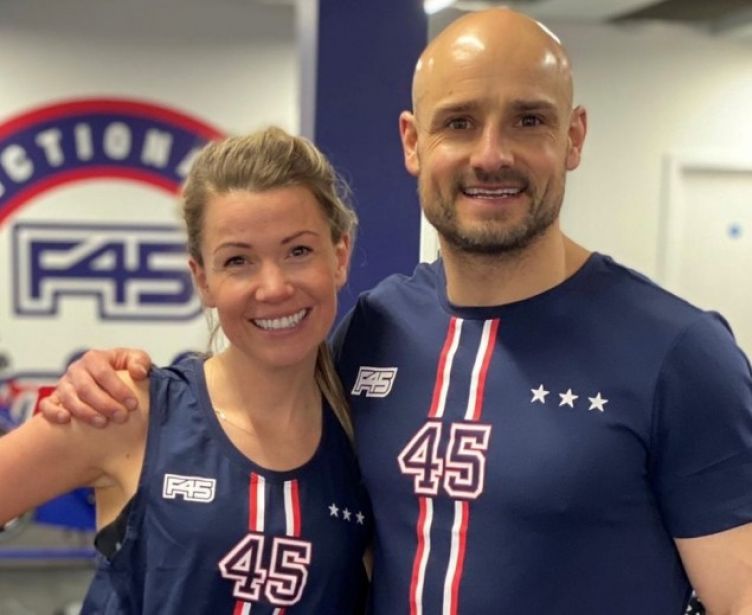 “Setting up our own gym has been something Jack and I have dreamt of since before I can remember,” says Gemma.

“We met at Leeds University, where Jack was completing a Masters in Physiotherapy and I was finishing my Business Studies Degree with a Chartered Institute of Marketing, and we were both preparing to start our lives in the corporate world despite always having a love and passion for health and fitness. After 15 years in the corporate world and both very comfortable in our jobs, we were presented with an opportunity that we could not refuse - to buy an existing F45 studio in Reading. Despite our excitement, we did not expect to do this during a global pandemic where gyms were forced to close, and the world was going through an economic crisis – not to mention we also had a newborn baby and a two-year-old to look after!

“Whilst this was not the most ideal time, we saw it as a fantastic opportunity to update the current studio and ensure that when we could re-open, it would be in the best possible condition. We also used this time to reach out to all the studio members to introduce ourselves and to find out how we could help them during the UK lockdown. We had an overwhelming response, and we were so excited to eventually meet all the members and start training with them. This also gave us a huge confidence boost that despite the times we were living in, we were destined to do this.

“We re-opened the Reading studio in the autumn after the lockdown restrictions eased, and we had a fantastic turnout of new and existing members. We implemented all health and safety precautions to ensure everyone felt self and comfortable whilst training. There was such a fantastic buzz and atmosphere in the studio, everyone was so happy to be back training in a group environment and our memberships were increasing every day, despite a lot of people still working from home.

“Although we had a fantastic start, we were forced to close after just 28 days due to the new government restrictions being put in place. It was so disheartening, but the decision was out of our control, so we decided to make the most out of the situation and helped all our members to train virtually via the F45 Challenge app and F45 Live.

“Behind the scenes, we were also looking to open a new studio in Henley-on-Thames, which became a reality around November 2020, during the second UK lockdown. We had a fantastic site in the new development – Gardiner Place – in the centre of Henley, and we were so excited as we knew we were bringing something different but exciting to the town. Shortly after Christmas, the studio was starting to get kitted out with all the F45 branding and our equipment was arriving, we also began our marketing campaign by offering discounted pre-opening memberships. In just a few short weeks, we already had 50 people signed up before the studio had even opened – we were ecstatic! We officially opened the studio in spring 2021, and we could not believe how busy we were that I had to make the decision to leave my corporate job – much quicker than we had expected, but we wanted to put our all into both our new and exciting businesses, and I have not looked back since.

“As we slowly come out of lockdowns and return to a somewhat ‘normal’ life, we are preparing to return to the usual F45 Training format, which we are so excited for as a lot of our members have never experienced F45 in its full glory before! The team training environment combined with high-fives and sweaty hugs is something we cannot wait for – it’s been a long time coming!

“We are thrilled with the progress we have made over the past year. We are so confident that both studios will be overflowing with members before we know it, and we are so excited for what the future holds for us.”