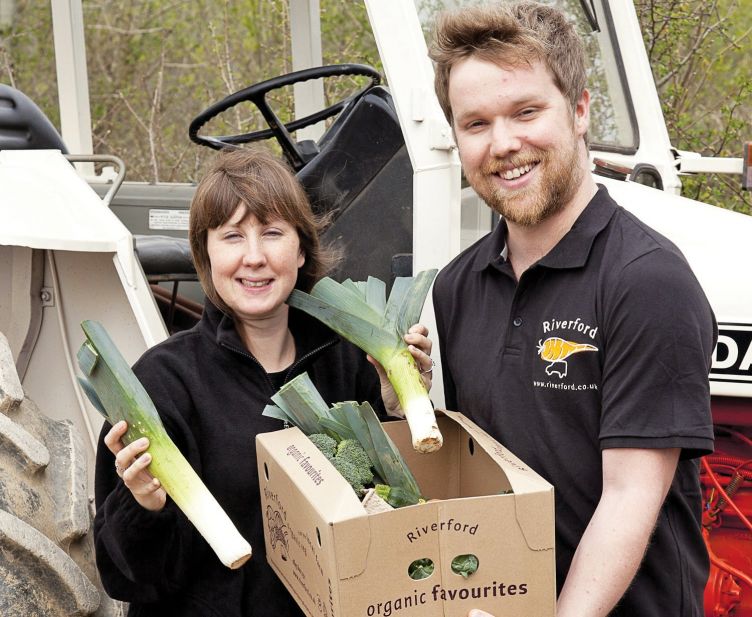 When one Riverford Organic franchisee decides to throw in the trowel, another emerges to unearth hidden gold. Matt Pigott talks to three canny investors who saw a 24-carat opportunity in a Riverford resale

Back in 1999 Riverford Organic began franchising in earnest - not just for the sake of expansion, but to take high quality, sustainable, organic food direct to the doorsteps of people around the country.

It was an idea that caught on, gathering momentum until the network had grown to over 70 franchised territories in 2011. Today the potential for franchisees to reach a turnover of more than £350,000 a year within three years, selling and delivering Riverford’s award winning organic produce, is more than achievable. That’s with just 340 customers. For those buying a resale, often with established rounds of more than 600 customers, the figures are even higher.

Says Laura Cottee, Riverford’s franchise territory manager: “The business has certainly flourished since it began operating in Devon more than a decade ago. I put this down to the simple fact that people have become increasingly concerned about the intrinsic quality of the food they eat - the taste, provenance and value. Basically they have started to care about where their food comes from and how it’s grown, because they know that what goes onto their plate ends up in their bodies.”

Helped along by a never-ending wave of television programmes promoting seasonal, sustainable and locally sourced produce, Riverford Organic has a steady stream of individuals and couples keen to buy into the brand by becoming franchisees.

Coffee adds: “After more than 10 years the Riverford franchise network is reaching full maturity. So savvy investors are snapping up resale opportunities as soon as they become available. The advantage is that, although these territories usually come at a premium, they also come with established rounds and a ready-made customer base, meaning franchisees are making money from day one. Ideally, with a resale there will also be room for improvement and expansion, and new franchisees should be able to increase turnover and profit once they take over.”

New franchisee Jim Harbridge is one such lucky investor. He and his wife Anna discovered Riverford’s Portsmouth franchisees were ready to sell, and became interested in the opportunity.

Says Jim: “I’d never run my own business before, and didn’t know anything about franchising. The previous franchisees had been running Riverford in Portsmouth for seven years. Anna and myself had been loyal customers, having our weekly veg boxes delivered for more than five years.

From a customer perspective, we loved the quality and taste of the food and the fact that Riverford was a forward thinking company - always introducing new products and services. But we never dreamt we’d end up investing in a franchise. So when we found out that Paul and Sue were selling up to go travelling, we were presented with an opportunity too good to miss out on.”

Since negotiating a price for the franchise,Jim has been through a comprehensive training programme at Riverford’s head office in Devon to learn about running his organic food delivery business. He also went out on the road with the former franchisee to get to grips with the rounds and meet some of his new customers.

Jim says:“With the right level of motivation and passion, the opportunity to make an excellent income and lead a flexible lifestyle is realistic.”

Andy and Haley Dwyer also jumped at the chance to buy a Riverford resale when it became available in Guildford.

Says Andy: “Haley and I had been looking for a business for awhile-something that we could do together. We’ve got the right balance of skills: Haley comes from a sales and marketing background, and I worked in food retail as a trained chef with big name brands. We weren’t specifically looking for a franchise when we first heard about Riverford, but I knew about Guy Watson’s restaurant concept and liked his approach to food and business. So when we discovered that the Guildford franchise, close to where we live, was being sold, Haley and I were interested.

“We went down to Riverford’s head office in Devon to meet the team and were inspired by the ethical side of the operation, as it’s something that’s always appealed to both of us. We wanted to be part of a company and a network that considers its place in the environment - a company that gives something back. From the field to the plate, Riverford’s food avoids all chemicals, such as herbicides and pesticides. So as franchisees we’re proud that the food we deliver to our customers tastes as nature intended it.”

Adds Andy:“Being part of a small family business works well for us as we can divide the roles. Haley takes over the back office side of the business, while I focus more on the logistical side. I really like it because we can be flexible. Our office is at home, so we can work family around the business and vice versa. We have a three-year-old son and we get to see him all of the time. He comes to the shows, he’s been to the farm with us and he sees us selling vegetables. It’s great because he’s aware of the sights and smells of good, organic, fresh produce from an early age.”

Tim and Jaqui Rix also invested in a Riverford Organic resale, this time in Buckinghamshire.

Says Tim: “We had to work hard to get the franchise because other people were also interested in buying it. Luckily it was Jaqui and myself who had the X Factor. I started looking at Riverford two months before I was made redundant from a corporate position with a company I’d worked at for 12 years. For me, it was definitely time for a change. At 49 I wanted the challenge and flexibility of working for myself, which Riverford gives me. And now I’ve got the added benefit of having the shortest commute in the world - to the office at the end of my garden.”

Tim adds: “Currently we’re delivering to around 650 customers a week and our recent figures showed that we’ve just hit the highest monthly turnover our territory has ever had, which is really encouraging. We’ve achieved this because we’ve increased and improved on the sales and marketing of the previous owners.

“I think that Riverford is a great business opportunity. Before investing, Jaqui and I looked at a number of different franchises. Riverford was competitively priced and strong on ethics. I think potential franchisees would struggle to find something as good for the same money.”

Laura Coffee says: Jim and Anna, Andy and Haley, and Tim and Jaqui all demonstrate the high level of positivity and motivation we like to see in Riverford franchisees.The qualities they have in common are that they’re passionate about organic food, they like business and they love people.

“Each day we review the many applications we get and choose the best - those who will hopefully become part of the Riverford network. Importantly, what our three couples reveal is that even if a franchise territory is taken, it doesn’t mean the existing franchisee won’t want to move on at some point, making their territory available. Because of this we’ll always keep details of potential franchisees on file at Riverford, and let them know if their preferred area becomes available. So contacting us and making the application is essential if candidates don’t want to miss out on the opportunity of their dreams.”

The total investment required for a new territory can range from £18,500 to £30,000, depending upon individual circumstances. Resale territory values can range upwards of £25,000.

To run a Riverford franchise, potential franchisees will need to have a home office with a computer, broadband access, telephone, fax and answer machine. Finance for the home delivery van is required, as is working capital for the first few months of trading.

At present Riverford has a higher number of both virgin and resale opportunities available in the north of England. So this is a genuine opportunity for anyone with business flair, a passion for organic food and a desire to become a focus in their community to talk to Riverford Organic about becoming a franchisee.