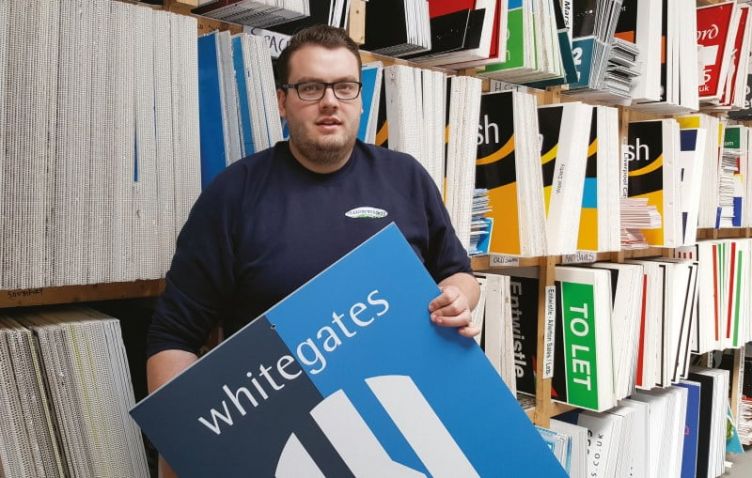 All roads lead to Countrywide Signs for Liam Smyth

It may not seem a natural step to go from retail management to starting a van-based business managing estate agency boards, but for 25-year-old Liam Smyth the transition was an obvious one following months of research.

“I was a line manager for Sainsbury’s for around four years and had worked in retail management for a further three years before that,” he says. “I was running the local online delivery operation with eight vans and 38 colleagues. It took time, but we got there and grew it more than 50 per cent during my time. I’m very proud of that.

“Countrywide Signs is a multi-van business, which obviously means you’re managing drivers and vehicles, and immediately made me think: ‘I do that now’. From there I read into it more, looked at the financials, what the business entailed and checked out potential local competition.”

Eye on the future

So why did he want to leave in the first place, given such a strong track record?

“I enjoyed it, but the hours didn’t suit me as much as they once did,” Liam explains. “I recently got married, so my eye is on the future for our family.

“A lot of days I was working from 3am until 3pm or 4pm and the number of hours just wasn’t adding up for me any more. I decided to look into something similar to Sainsbury’s and I liken Countrywide Signs to that role a lot - it’s all about customer service, a multi-van business, managing people.

“That’s the stage I want to get to, expanding into more vans and bringing in a team. At the moment it’s just me in the van, so I’m doing everything.”

That’s the kind of culture change that would be tough for many to swallow, but despite his young age Liam’s already displaying a rare maturity in his approach to his new business.

He says: “It’s going to be me for probably the first 12 months or so before I take someone on, but that way I learn the job inside out as well.

“I always like to know what the people working for me are facing. Every job I asked of someone I had either done or been trained to do, so I could help those people out. It’s the same now, I need to be able to drive the van and put up the signs, not just employ people to do it. I’m transferring what I’ve learned in my career.”

That attitude is typical of the way Liam approaches things, highlighted by the lengths he went to in his research.

He says: “I spent about a year and a half researching franchises, as I wanted to be sure I found the right thing. I looked at everything from investing £300,000 in a pizza outlet to a few hundred pounds making cards from home - there’s such a broad spectrum. But this is where I landed, because of my previous experience and how relevant it is.

“I wanted to know the scope of my local market. So as part of my research I rang 150 estate agents and asked them how their service was. The average score out of 10 was six, so I knew there was a lot of room for improvement.

“The internet can only tell you so much, so speaking with the people that have the service was the best way to gauge how the competitors were doing in my area.

“I know I can serve customers to the highest of standards, I’ve been doing it for the last seven years, so I knew I could take that and succeed in this sector.”

Liam credits his analytical mind to his career skills: “I think that experience comes from managing multiple departments. A bakery or produce manager is very different to groceries or checkouts. There’s always a process to figure out. Look at the steps to move forwards by building the right foundations. That means when you get to a certain point, those foundations don’t crumble.”

As for the future, Liam’s plans are unsurprisingly ambitious. His aim? “Expanding,” he says.

“In my first month I didn’t push to take on extra clients, just using the base provided by head office. If I’m going to walk into a client and say: ‘I can provide you with the best service you’ve ever had’, I need to believe in what I’m saying because they won’t believe in me if I don’t.

“For me to be able to make that statement to potential clients, I’m making sure with the work I have at the moment that I’m delivering the best service they’ve seen in the area. When I’ve got the foundations right, when I walk in and tell them that I can give them the best service, it’s the truth.”

Does he feel being younger is a hindrance? Not even a little

“I was managing a team of people when I was 18 and I’ve always enjoyed it,” Liam says. “I think it suits my outlook and how I approach things. I was seen as someone who would get things done and get things moving. It’s how good you are that counts.”

Liam’s certainly getting things moving now. But did he think about going it alone?

“I don’t have any of the systems that Countrywide have,” Liam says. “If I wanted to start my own sign erection business, I’d be walking into an agent with nothing backing me up.

“It would have been a lot harder to try and start without the name, the brand recognition. When I spoke to the agents I called, I mentioned that Countrywide Signs were coming to the area, and they said: ‘Excellent’.

“They’d already heard of us. It’s the support network I required. Starting a business from scratch isn’t something I’ve done before, so that’s why I went for a franchise.”

Start your own Countrywide Signs franchise

Send a free enquiry to Countrywide Signs for further information!