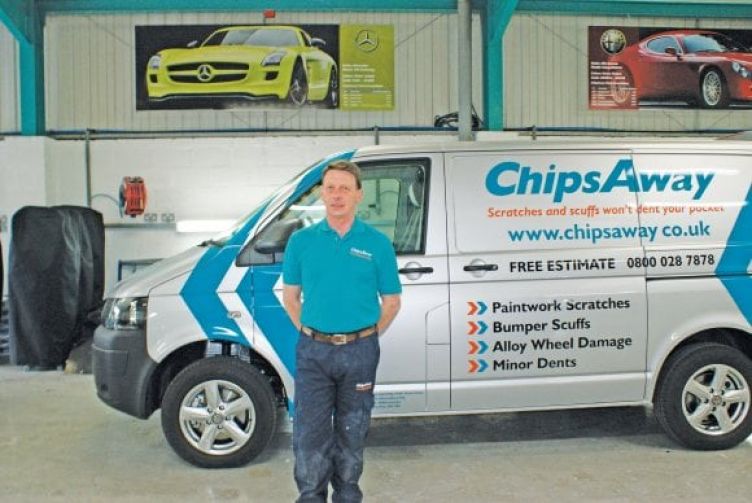 Chris Spencer is living proof that franchising can reap whatever you want it to, if you put in the effort - even in the early days

Just six months into his ChipAway business, Chris Spencer is hitting quarterly targets more in line with a second year of trading, whilst working fewer hours than in his previous employment.

“Don’t get me wrong,” Chris says, “this doesn’t happen without a solid work ethic, but it’s there for the taking. Some people will work just as much as they need to, maybe fit in a couple of jobs and then spend the afternoon on the golf course.

“I’m the other end of the scale - there’s very little I turn down and thanks to making some really good marketing connections, the phone never stops ringing.”

Chris began his journey with ChipsAway in the summer of 2015. Before then, he was travelling around 50,000 miles per year and working 65-70 hours a week in his role as a senior project manager. It was a prestigious, well paid job, but he knew that in order to do it well rather than just firefight, he would never be able to reduce his hours.

“The work/life balance didn’t exist,” Chris says. “My wife and I had moved to the country, but weren’t able to enjoy it. I knew I had to change and money was obviously a consideration, but flexibility to run my own life was actually the major factor.”

Chris considered many things, but after doing extensive online research he found ChipsAway. “I was hugely impressed with their credentials and the fact they are absolute brand leaders,” he says.

This led to attending an open day, where Chris met CEO Tim Harris, as well as various other members of ChipsAway’s head office team and some existing franchisees.

“Everyone was friendly and approachable and the quality of the demonstration repair was superb,” Chris says. “I left with a lot to think about.”

Once his territory had been agreed and training complete, his rise was stratospheric.

“As soon as my personalised web page went live, which is included as part of the launch package, I started receiving leads,” Chris says. “Within days, I had a week’s worth of work booked into my diary. I didn’t even need to do the usual route of supermarket promotions and leaflet drops to raise my profile, it was that quick.”

And things have continued in a similar vein from there, thanks to a combination of marketing tools.

“I had no idea how huge the ChipsAway brand was,” Chris says. “I get stopped at traffic lights and asked for cards. I get approached in supermarkets because of the name on my jacket. It’s phenomenal.”

Chris also finds that a mix of referral work from allied trades, such as valeters and tyre fitters, as well as his love for classic cars, has helped him make great contacts and secure a good amount of work - not to mention being responsible for large prestigious fleets.

Simply being kind, courteous, reliable and doing an excellent job also accounts for a fantastic level of repeat business, which even just six months in Chris says generates up to five calls a week - and this will only grow with time.

As for the future, it’s looking wonderful. He’s planning to attend further training courses held at ChipsAway’s IMI accredited training centre to extend his range of services and then possibly open a CarCare Centre. This will enable him to provide another tier of services, such as lease return inspection work.

“It’s all about trust, reliability and quality,” Chris says. “Build it with your customers, give them more than they expect and you’ll have them, and their network of family, friends and clients, for life.

“The journey so far has far exceeded my expectations and I’m looking forward to seeing what the future has in store.”