Meet the couple who’ve gone from employees to business owners 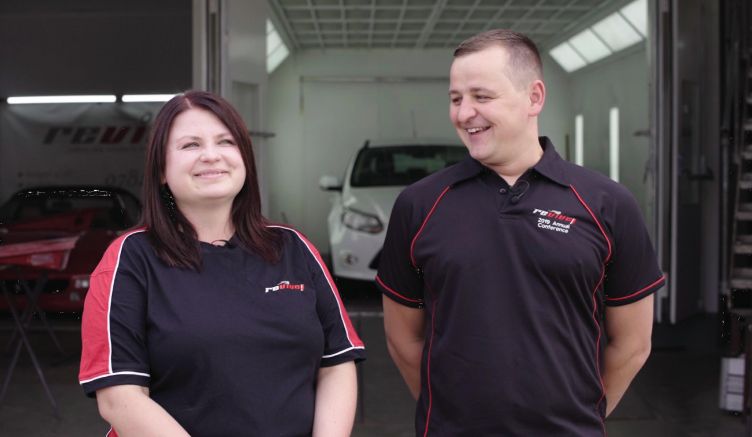 Irmina and Michal Kowalska postponed buying a house, instead putting their money into a Revive! franchise

The world of cars and mobile-based car repairs has traditionally been almost exclusively male, with few women making it their career of choice.

However, franchisee Irmina Kowalska of Revive! Basingstoke is not phased at all by being one of a handful of women operating in the sector.

In 2013, she and her partner Michal decided to postpone buying a house and instead put their savings into starting their own Revive! franchise. It was a new world for Irmina, but she threw herself into it, taking up the training opportunities with Revive!

Irmina deals with a wide range of customers, from local and national car dealerships to the general public, and has been instrumental in driving sales growth for Revive! Basingstoke, gaining the Developer Gold award at last year’s annual Revive! conference.

She says: “Like many people starting a business, we wanted to be in more control of our future. Being part of a network really helps. We have other franchisees around us who will help if we need it, as well as support from head office.

“One of the best moments was winning an award for business growth at the last Revive! conference, something I’m very proud of.

“The money we saved over the years we could have invested in a house, but we decided that investing in a business would be a better idea. “Head office have been there for us since day one - they help us with everything. It’s not just a phone call, it’s all the training and other support they offer to help build the business with you.”

Irmina and Michal say they wondered how they were going to get customers, how to answer phone calls, how to talk to customers and get more jobs.

“It was all new territory for us,” she admits. “But everybody at head office was so dedicated to us, from helping us call and win customers to guiding us in our first week. Most of our customers are regulars and many we gained in that first week are still with us, so obviously the support we got from Revive! meant a lot.

“We won the Developer Gold award and it meant we felt that all the work and effort we’ve put into our business was recognised by head office. It made us proud and want to go further with the business. It’s really rewarding.”

Over the years, Revive! has invested in building an experienced team to support franchisees, as well as a leading edge IT platform, which has transformed the business.

This success has been recognised again this year in the British Franchise Association HSBC awards, where Revive! is one of only six companies shortlisted for the prestigious Franchisor of the Year Award, after previously winning the 2018 bfa/HSBC award for Franchisee Support.