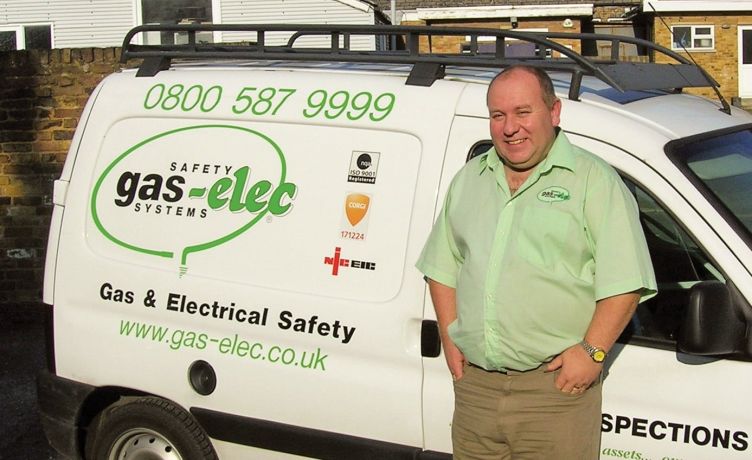 If you want to know what it's like to work for gas-elec, the leading gas and electrical inspection franchise, talk to Dennis Healy

Dennis Healy started at gas-elec shortly after the company was born in 1996 - and is about to sit the industry’s five-yearly gas exams so that he can stay on until at least 2017.

A former electrician with Southern Electric, Dennis joined gas-elec- which pioneered the concept of a single engineer carrying out both gas and electrical inspections in one visit -because he liked the idea of being self-employed without having to land the actual work. So much so, in fact, that he actually helped with the initial pilot of the franchise: this safety inspection engineer has been with gas-elec every step of its highly successful way.

“The company finds all the work,” he explains. “My regional office typically books me five jobs a day. The first one is usually at 8am and I’m generally home at 4.30pm when I enter the details of the day’s work on my computer before submitting them to the company. So there is absolutely no selling. As a system, I really can’t fault it.”

No selling and no invoice chasing either - money lands in Dennis’ bank account direct from gas-elec. One of the biggest turn-offs for would-be franchisees is the mountain of administration that comes with self-employment. Knowing this, the company devised the Gas-elec Bureau Services (GBS), a bespoke bureau facility that diarises, produces invoices, sends them out, logs credit limits and control for account holding customers, and distributes monies twice a month to its 110 franchisees.

“We came up with the idea eight years ago after we realised that the amount of time regional offices were spending on admin was leading to a direct fall in sales,” explains managing director John Davidson.“We brought in a team of accountants who set up the systems and wrote the software to our specifications. They administered it for us for two to three years and then we took it back in-house and adapted it further still. On average, GBS saves our engineers around 17 hours a week in book keeping.That’s proper support for our franchisees.”

Proper support for Dennis, which has enabled the 50-year-old to comfortably look after a family of five - three now teenage daughters and his wife, who doesn’t work outside the home - for 15 years. “I don’t hear them moaning,” he laughs.

Almost all of Dennis’ work is in and around Berkshire where the sight of him driving around in his van,fully liveried with the gas-elec logo, is not unfamiliar to locals. Sometimes he gets several days’ work at the same property, which cuts down on driving further still. However, for three consecutive summers he was asked to work much further afield. It was far from inconvenient.

“I was sent to Spain to do some testing and remedial work on some Thomson hotels,” says Dennis. “They asked me, in all seriousness, how many times a year they’d have to get things checked and I was tempted to say ‘twice’ so I could go back again the same year.”

But these days, the majority of his workload comprises boiler repairs and electrical remedial work for agents, homeowners and private landlords in the SL postcodes. It’s a workload that looks set to rapidly increase. By 2026 half of all householders in the UK are expected to be living in rented accommodation, which means, in turn, that some 10 million rented properties, gas-elec’s core market, will require annual gas and electrical safety inspections as well as attendant works such as new boilers.

Add in other factors, such as the increasing number of homeowners who are asking for safety inspections before they sell their homes, the company’s plans to increase its profile in the care home sector and, most important, the UK’s ever growing safety conscious gas and electrical legislation, and gas-elec’s current annual workload of 100,000 jobs is set to grow very fast indeed.

No wonder Dennis plans on renewing his franchise for another term.