“After six years as an employee in a Driver Hire office, setting out on my own was a scary prospect” 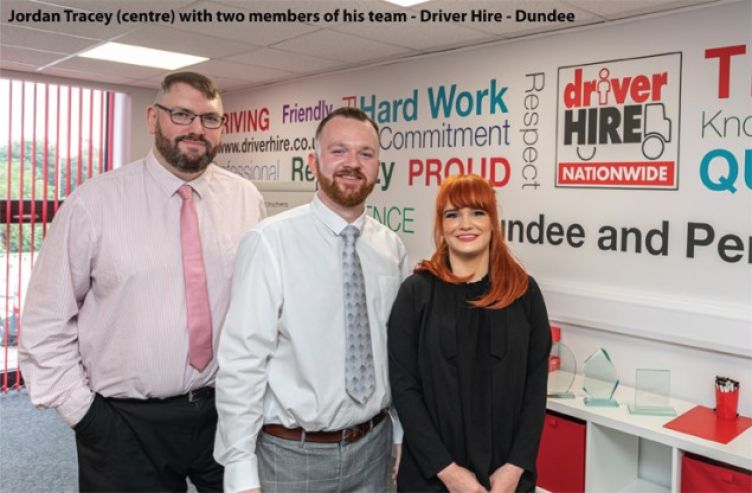 Jordan Tracey, Driver Hire Dundee and Perth franchisee, is proving that age is no barrier in franchising

At the age of 23, Jordan Tracey has already progressed from recruitment consultant to franchisee to bfa HSBC Franchisee of the Year Finalist – demonstrating that hard work, determination and ambition can take you a very long way.

Having worked in a number of roles since the age of 12, hard work has never been alien to Jordan. He left school and decided to move straight into employment instead of further education – a decision that is paying dividends. After a short stint in retail sales at the age of 17, Jordan applied for a role within a Driver Hire office (operated by one of its franchisees in Scotland). It was here that Jordan found his love for recruitment, and it wasn’t long before he moved up the ranks from recruitment consultant to office manager.

After several successful years working for the franchisee, Jordan was hungry for more. The next natural step in his progression was to run his very own Driver Hire business, and this was dependent on there being an opportunity available.

“I was working really hard, and loving it, but increasingly felt like I’d like to be my own boss – and see a direct return for my efforts,” he said.

It wasn’t long until the right opportunity appeared when the existing Driver Hire Dundee and Perth business was put on the market. Jordan was immediately attracted to the business, and after a conversation with Driver Hire’s franchise sales director, Graham Duckworth, he worked towards completing a purchase of the business, using his life savings for a deposit and initial working capital.

“After six years as an employee in a Driver Hire office, setting out on my own was a scary prospect. I remember sitting in my hotel room on the night before my Driver Hire Foundation Course thinking ‘what have I done?’” he pondered.

Jordan officially became the new franchisee of Driver Hire Perth and Dundee on 2 March 2020 – just three weeks before the UK entered its first COVID-19 lockdown! Having initially gotten off to a good start, growing weekly revenue to around £6,000 in his first weeks, revenues dipped due to the impact of the first (and most extreme) lockdown, when many sectors temporarily closed.

“Instead of feeling sorry for myself, I decided I had to man up. I hit the phones and worked really hard on calls. I turned a small corner and business started to trickle back in. What was particularly hard was keeping drivers onboard whilst there wasn’t much work to offer them,” explained Jordan.

Having shown great tenacity, by September 2020, Jordan was back on an even keel. His next goal was to take the business to another level. With his typical flair and energy, he has taken the business to new heights, achieving over £1.3m turnover already this financial year, with a further few months to go.

In recognition of Jordan’s success, in November 2021, he was selected as a Next Generation Franchisee finalist at the prestigious bfa HSBC Franchise Awards, in which he was described as one of the “best in franchising”. Nearly two years on, Jordan hasn’t looked back on his decision to take over as franchisee. He added: “This business is transforming my life, thanks to franchising, the Driver Hire model, and my own hard work.”