“Instead of going back into catering, I made a call to Snap-on” 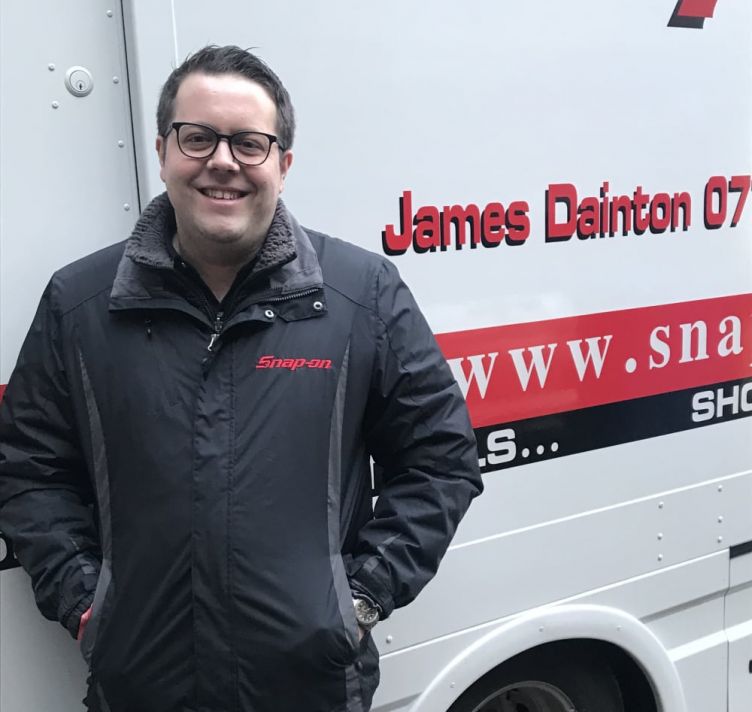 Franchisee James Dainton turned his back on the late nights and hot kitchen, in favour of his dream career with Snap-on Tools

31-year-old James Dainton made the life-changing decision to start his own franchise after suffering the loss of his mum to ovarian cancer in September 2018. Having spent most of his adult life working in catering, he turned his back on the late nights and hot kitchen, in favour of his dream career and a new start for his wife and young son. He launched his Snap-on franchise in Horwich in February 2019.

“Losing my mum was a real wake-up call for me,” he says.“She would have wanted me to pursue something that made me want to get out of bed in the morning – the truth is, I hadn’t had that feeling in a long time. I needed to make a real positive change in my life and do something I actually enjoy. Both my dad and my grandad had owned businesses of their own, so I think that entrepreneurial mindset must have rubbed off on me! Starting my own Snap-on franchise just felt like the right decision for me and my family and so far, it’s been the best decision I’ve ever made.”

Back in 2004, James left school and began a prestigious catering scholarship, having gone up against hundreds of other applicants to secure his place on the course. Despite his young age, he never once shied away from hard work and consistently progressed in a career that would span well over a decade.

James explains: “I was offered a really good start in catering and even went on to work with one of the most renowned chefs in Lancashire. For the most part, I enjoyed the work – I’m a real workhorse and thrived in the chaotic atmosphere of a busy kitchen. I mainly worked in kitchens, starting as a junior and then working up to second chef and, eventually, head chef. I also ran a café for a little while, which taught me skills about operating a business that would prove useful when I came to launch the franchise.

“Unfortunately, my mum became really ill and I had to give up my job running the café to help her and my dad around the house. My wife and I moved back in with them, to make life a bit easier for everyone. Caring for my family became my sole focus for a long time until mum passed away last year. It made me realise that life is too short to do something you don’t enjoy – the late nights and hours spent in a hot kitchen had really lost their appeal. Instead of going back into catering, I made a call to Snap-on.”

Although a career in catering doesn’t tend to go hand-in-hand with a dream to own a franchise with the most recognised tool brand in the world, James had always been aware of the Snap-on brand and range of products.

“One of my biggest passions in life is vintage motor cars, which I’ve worked on with my brother since we were kids,” he says.“I’d grown up using Snap-on tools – in fact, they were pretty much the only tools I’d ever used. My brother went on to work as an engineer for Jaguar Land Rover and he’s always been adamant that they’re the best in the business.”

Having first considered the opportunity 12 months before, James had plenty of time to consider how running a franchise would fit around his life as a husband and new dad: “Our little boy, Oliver, was only one when I first considered Snap-on. It wasn’t possible for me back then but now he was a little older and I no longer had my mum to care for, it just seemed like the right time. I met with the Snap-on team, who quickly got me out on the road with an existing franchisee, so I could see what life might be like as a Snap-on man. For me, it only reaffirmed what I already knew about the brand – as a franchisee, you have the opportunity to build a comfortable lifestyle for yourself and your family, by selling the best tools in the business and building relationships with technicians in the area. I was sold! Recognising my desire to do something better with my life, Snap-on welcomed me to the network and sent me on my way to franchisee training.”

Having been out of work for a considerable amount of time before launching his franchise, James accepted the support of Snap-on Finance to fund part of his set-up costs. Snap-on is one of the only franchisors in the UK able to help franchisees fund the purchase of the business. It is done through its in-house bank, Snap-on Finance. Fully regulated and government-approved, Snap-on Finance eliminates the need for the high street banks.

“In all honesty, launching a franchise would have been a non-starter, had it not been for the financial support,” says James. “The support team are great at helping you get a payment plan in place, so you can work out how to pay back the loan as quickly as you can, without putting your income in jeopardy. That’s one of the best things about being part of a franchise network – you’re offered unlimited support, which is so important if, like me, you haven’t owned a business before. Sometimes I don’t know what I would do without them.”

With his wife, Gabrielle about to embark on a university degree and the young couple saving for their first family home, James is clear about his hopes for the business and what motivates him to succeed: “I’m determined to build a really profitable business – my aim is to hit sales of £8,000 per week, I actually don’t think I’m far off that already. I just love making the sales, it’s really rewarding. And knowing you’re supplying a fantastic product that’s going to make all the difference to the guys out in the field is the icing on the cake. I’m really proud of what I’ve achieved so far. I think one of the best things about owning a franchise with Snap-on is where you can take the business – for the first time in a long time, I’m looking forward to seeing what the future holds. It certainly looks bright from where I’m standing.”