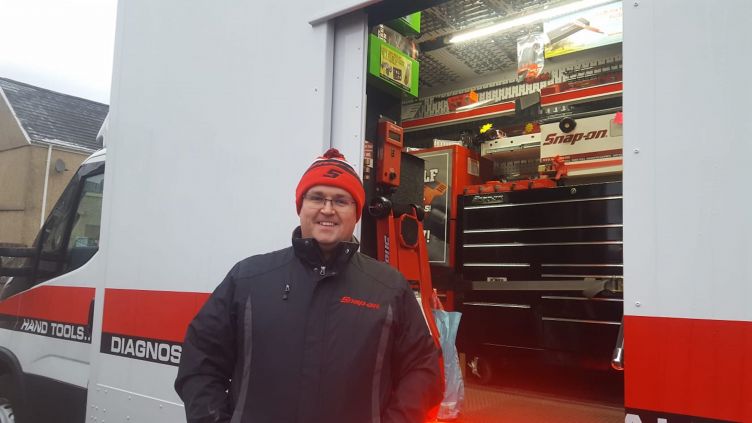 Alun Jones, 39, wanted to do one of two things when he ‘grew up’ – work in Motorsport or be Snap-on man. Unlike many who are quick to disregard their childhood dreams, he’s managed to achieve both! His varied career has indeed involved a stint working for Motorsport teams across Europe. But it is his role as a Snap-on franchisee in West Wales that has brought him the career satisfaction he so desperately yearned for. And he’s got big plans in mind for the future.

“I want to invest in a bigger truck so that I can offer my customers an even better product range and service,” says Alun. “I’m already really busy but a new truck will definitely up my game. 12 months from now, I’m hoping I will have paid back the loan from Snap-on and look to really increase my earnings, for the benefit of my wife and two sons. One thing’s for sure, at the rate at which I’m going, that goal is very much achievable. I’m constantly on the go, but I like the hustle and bustle. There’s never a dull moment!”

Having always had a passion for motor mechanics, Alun’s goal was to work for the best of the best. He spent a brief period working in a garage after leaving school aged 17 but decided to prioritise his education and reinvigorate his childhood dream for a successful and profitable career.

“Education in the traditional sense was never really for me so I decided to leave school partway through sixth form and get a job. That was when my admiration for Snap-on intensified – as an apprentice, I was using the odd tool here and there and starting to save for my own collection. In hindsight, that was probably where my dream of being a Snap-on man came from. I enrolled on an HND in Motor Vehicle Engineering at Swansea University as I knew that would stand me in good stead if I wanted to go down the franchise route. I worked part-time to supplement my student loan and got a great job in the sales division of a motorcycle company. I’m a chatty, friendly guy with a passion for mechanics, so it suited me down to the ground,” he explains.

So much so that Alun went on to work for the firm full-time after graduation before embarking on a five-year career in truck driving. First as an employee and, later down the line, in a self-employed capacity. But the solitary lifestyle of long-haul driving began to take its toll.

Alun continues: “I found myself looking at Snap-on opportunities more and more, revisiting the goal that I seemed to have moved so far away from. You only get one life, so what’s the point in chasing dreams that aren’t yours? I’d initially looked into starting a franchise when I owned my truck business, but it just hadn’t been the right time. But I suddenly felt as though I didn’t want to waste a single second waiting for the perfect moment to start a franchise. At this point, I was a husband and dad, so financial stability and career satisfaction became a real consideration for me. I didn’t put it off any longer – I got straight in touch with Snap-on.”

Snap-on is the world’s number one professional tool brand. It is the leading global manufacturer and distributor of tools for the professional technician. Franchisees sell the most sought-after tools in the industry and deliver outstanding customer service to technicians up and down the country. Its fantastic business opportunity offers you the chance to be your own boss whilst being supported by an elite team of industry specialists. Alun’s breadth of experience spoke volumes to the Snap-on franchise team and in 2009 he was welcomed into the network.

“It was a bit of a ‘pinch me’ moment, finally being part of a brand that I had admired for so long,” he says. “The role combined all of the skills I’d picked up since my school days – customer service, knowledge of the automotive industry and a strong work ethic. I’m really motivated to do well and earn a good and honest living, which drives me to always strive for the best. Most importantly, there’s nothing I enjoy more than the banter I have with my customers.”

Alun’s sales figures and reputation for impeccable customer service soon caught the attention of Snap-on management and he was to be offered a role working as part of the nationwide diagnostic team. Despite the career experience the role offered, Alun missed the camaraderie of his regular routes and loyal customers. In late 2018, Alun returned to the franchise network, launching his franchise in Carmarthenshire and South Pembrokeshire.

For the second time in ten years, Alun would find himself taking part in the new franchisee training programme. Training starts with ten days of classroom-style training in the US. Afterwards, franchisees visit Snap-on’s UK head office in Kettering to meet the staff who will support them on a daily basis and collect their very own custom-built mobile store! Once out on the road, one-to-one training continues with a dedicated franchise developer who rides with franchisees for their first five weeks. As part of a six-month intensive onboarding process, new franchisees receive a further 31 days of on-van support from a sales developer and business manager over the following five months. That’s 51 contact days in the first six months!

“I’ve worn many hats in my career but it’s the franchisee hat that I wear the best,” says Alun. “I was also meant to be a Snap-on man. I’d really missed the banter I’d had with my customers when I launched my first franchise and the familiarity of the brand I’d grown up with, so I couldn’t wait to get back from training and out on the road. I’d managed to save a significant nest-egg, so when I came back, I was able to combine my savings and a loan from Snap-on to pay for the franchise.”

Snap-on is one of the only franchisors in the UK able to help its franchisees fund the purchase of the business. It is done through its in-house bank, Snap-on Finance. This fully regulated finance house eliminates the need for the high street banks and after all, who better to invest in your franchise with you than your franchisor?

Alun was soon back to his familiar routine of customer calls, accounting and ordering stock to keep up with demand. 12 months on, he admits that his days are long but varied, and his passion for offering impeccable customer service is what gets him out of bed in the morning.

He says: “Snap-on is the best product going. It’s the Ferrari of the tool world so I’m proud to offer a service that reflects that. At the end of the day, I’m a down to earth guy and like to think I treat my customers like mates. I wash the van inside and out every week and with the help of my wife, we make sure I’m always ready to offer the service my customers deserve.

“I make good money, that’s undeniable, but that’s as a result of the high standard I set for myself. I wouldn’t necessarily say that I’m money-driven but I am adamant that my kids will want for nothing. My days are hectic, and I do find it hard to switch off, but you would too if you were as passionate about your career as I am! That’s what I’d always say to others looking to join Snap-on – you have to have passion for the brand and respect for the way things are done around here. I take a lot of satisfaction from knowing my customers are happy. If I couldn’t have a laugh with them, then I’d be in the wrong job. But it just so happens that I get to laugh every day – that’s enough for me.”