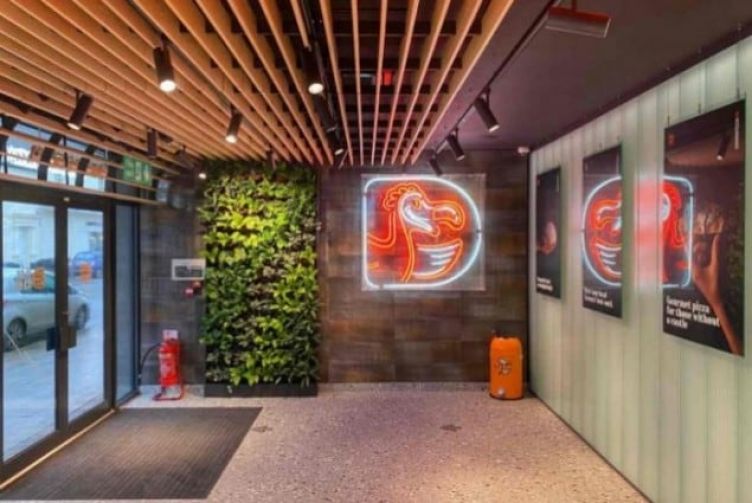 Dodo Pizza already operates four franchised pizza stores in the UK — located in Brighton, Coventry, Walsall — but the new Leamington Spa-based unit is the brand’s first company-owned store in the region and will be the first location to showcase its new “gourmet delivery-takeaway brand built around Roman-style dough”.

Roman-style dough is a traditional recipe that makes the crust light, crispy, rectangular in shape and “more aligned with the preferences of the modern customer”, according to the brand.

With the creation of the new concept, Russia’s Dodo Pizza is aiming to be a key player in the UK. The brand is bolstered by a +16 per cent year-over-year in overall international system sales in October 2020.

After a planned rollout of five new company-owned units in 2021 where the gourmet delivery-takeaway concept will be tested, Dodo Pizza will start franchising at the beginning of 2022, with plans to operate 50 units in the UK by 2023.

“For the next few years we’re going to concentrate heavily on development in the United Kingdom,” said Fyodor Ovchinnikov, Dodo Brands founder and CEO. “It’s one of the largest pizza delivery markets in Europe. The competition is stiff but we’re certain there is room for new innovative players. We see great potential in Great Britain and believe that the total openness of our company, its integrity and customer-oriented approach, as well as our tech platform, will allow us to attract business partners, win favour with customers and build a strong brand in the UK.”

David Sweeney, head of business development in the UK, said: “Once or twice in a decade, perhaps 10 times in our working lives, a concept arrives with the depth and breadth to entirely disrupt and rewrite the sector it is in. I believe Dodo Pizza is going to be the one to do this in the pizza market.”

Start your own Moving Home Made Easy franchise

Send a free enquiry to Moving Home Made Easy for further information!